Imagine how difficult public debate in these partisan times can be for someone like me whose motto is "extremism in the pursuit of moderation is no vice."  I haven't seen Inside Job, but I have read the reviews, good and bad, and I think I get the point.  I confess to never having seen a Michael Moore "documentary," A Civil Action, or Erin Brockovitch.  But this is from a reviewer, Keith Uhlich in TimeOut New York, who liked it, and it doesn't inspire me to fork over the twelve bucks:  "Ferguson uses innumerable tricks of the slick-doc trade (pop-music montages; gotcha smash cuts; celebrity narration—in this case, Matt Damon). Even the title is a loaded, tragedy-invoking provocation."  Nor am I enticed by the appeal to post-partisanship in the pursuit of outrage, as Uhlich describes it:  "Ferguson’s trying to move beyond the political dichotomies that divide us into bellowing factions and show how rampant greed screws us all."

Since I'm about to fly off to Minneapolis to give a milk-toasty response (see above motto) to the question "Did Capitalism Fail?" (my answer:  Capitalism Didn't Fail, But the Metaphors Got a "C"), I decided I ought to think for a little bit this morning whether I was wrong, and director Ferguson was right.  I thought that particularly because my friend Frank Pasquale at Concurring Opinions also liked the movie a lot, and that means I have to take it seriously, if for no other reason that Frank has taught me so much on other issues.  As I expected, Frank gets past the slick doc stuff (I cringe at the idea of watching the 60 Minutes-style "did you stop beating your wife?" questions) and suggests there are four arguments being made:  (1) Wall Street compensation is loopy; (2) the Obama administration hasn't done anything to create reform, instead relying on the same bankers as the Bush administration; (3) the Obama administration is as taken with the revolving door cabal of "Goldman Sach alums and fail-upward regulators" in which it is no longer possible to determine who captured whom; and (4) the U.S. has turned into a financial (rather than mechanical, civil, bio, or electrical) engineering power bound to lose out to China and others in the long run.  I also think Frank's review is honest in describing its own position (see contra my motto above):  "I’ll be looking beyond the core of the economics profession for a compelling account of a fair and just society. When it comes to finance, progressives should also realize they have few friends in the current administration."

I realize, however, that my milk-toasty approach hasn't quite failed me (I can't speak for others).  My essay is about the relationship between causation, as scientists would explore it, and meaning, as the rest of us would derive it.  The approach of Inside Job is less an explanation of what happened than a narrative of its meaning.  I'm still agnostic on the question whether "rampant greed screws us all" mainly because I like my MacBook and my iPhone, and I think they are the products of rampant greed.  On the other hand, I recently turned down the opportunity to invest in a derivative akin to a synthetic CDO in part because the idea of it bugged me, even though I had no good response to my broker why it was any worse than investing in the underlying market.*  As I note in the essay, one way to interpret events for their meaning is to decide whether misfortune is the result of gods or demons, and sometimes it is.  Sometimes, however, it is "stuff happens."  (I decided I wanted this post printable someday in a family newspaper.)  We are, however, imbued with a tendency to teleology, that is, the seeing of purpose (even if purpose is no more than "function") when things like solar systems, automobiles, and macro-economies seem to work with a predictability regularity.  I like graphs, however, and I came up with this one as I was walking to the T this morning: 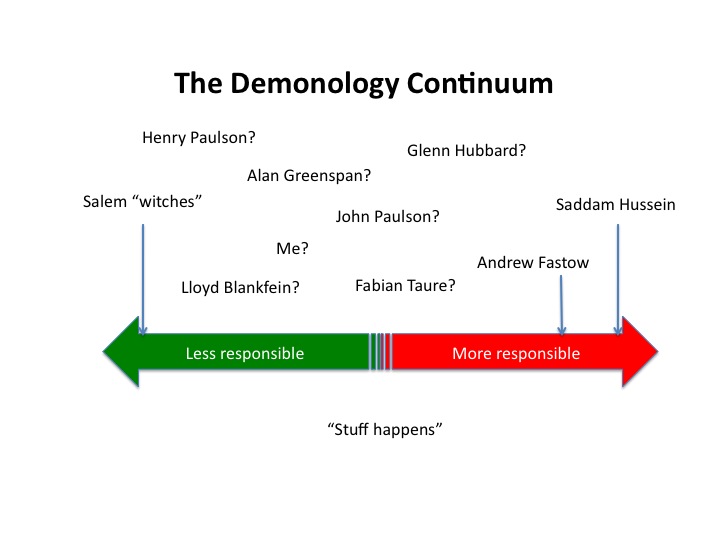 As you can see, I had no problem placing the Salem "witches," Saddam Hussein, and Andrew Fastow, one of the architects of the Enron scam, on the continuum.  In the spirit of the movie, however, I wasn't quite sure where to place the rest of these names (or the myriad others - like God, the boogie-man, the Trilateral Commission, or the Bohemian Grove - that occurred to me).

My point is not that there are never culpable demons, but that sometimes those who we think are culpable demons are not.  I have not yet been persuaded by the level of public discourse (Ann Coulter?  Sarah Palin?  Michael Moore?  Glenn Beck?  Jon Stewart?  Stephen Colbert?) that we can say we've reached a level of rationality such that witch trials were then, and now is now.  What is comforting is that at least I can have a reasoned and civil discussion with Frank, without the sound bites, even if we don't agree!

*UPDATE:  Actually, I did come up with a reason or rationalization but it's almost as complicated as the investment vehicle, so I won't bother explaining it.

Listed below are links to weblogs that reference Plotting Wall Street Bankers on the Saddam Hussein - Salem Witch Trials Continuum:

I suspect that avarice was only part of the emotional and motivational complex (from the production side) that led to your MacBook and iPhone, especially when we consider the likelihood that the turbo-capitalist hyper-technological system creates and perpetuates the terms and conditions of economic survival and success (and, after Marx, perhaps the seeds of its eventual demise) that account for (often wasteful and ecologically harmful) technological innovation and novelty, hence we need not moralize too much here. It's perhaps more the case that the "system" tends to (indiscriminately but predictably) exploit and reward both specific virtues and, alas, vices. With regard to the latter, we need only recall Mandeville's prescient Fable of the Bees: or Private Vices, Publick Benefits (1714), the subtitle of which refers to the fact that vices in such a system (in this case, in its earliest form) frequently serve as the fuel that fires the economic engine of our society, in this case, being among the necessary conditions of economic prosperity. Envy is perhaps the most pervasive and foremost emotion in this regard inasmuch as, at least with regard to consumption, it best accounts for conspicuous consumption and shameless affluence, making possible the transformation of desires and wishes into (legitimate and otherwise) needs (one reason for the notion of 'relative' deprivation). So capitalism skillfully exploits both virtues (e.g., self-discipline, hard work, ingenuity, and so on) and vices (e.g., avarice and envy), prompting the question among some of us as to the possibility of an economic system that might discourage or at least not exploit in such an unapologetic and egregious fashion our dispositional tendencies toward the vices (which, after all, can crowd out or trump virtuous motivations and qualities). Our assumptions and beliefs about human nature and (Godwinian-like) perfectibility (the latter concerning open-ended cognitive, psychological and moral growth) are perhaps decisive here, as self-described "realists" and those liable to emphasize our fallibility or original sin (or fall from grace) will conclude that the benefits are worth the price paid (to the devil).

Stuff may indeed "happen," but the presumption is better made to the contrary at least by way of an heuristic explanatory assumption until such time as we run into dead ends or exhaust all possible (and plausible) reasons. In any case, our explanations and narratives of meaning may be necessarily impartial and incomplete (or, in the case of meaning, not wholly satisfying), but no less important for all that, and in this sense we might be tempted to therefore simply say that "stuff happens" by way of accounting for the degree of incompleteness or indeterminacy. Otherwise we risk relying on such a proposition by way of a "gap" filler on par with the facile or premature or impatient or even despairing resort to "mystery" in religious explanations. Mystery there may be, but I suspect it comes only at the end, or after we've reached the limits, of reason (e.g., the doctrine of the Trinity or the proposition that 'God exists' may be, in the end, a mystery, but that does not preclude us from rationally exploring and arguing for such doctrines and beliefs, for filling out the cognitive side of the equation as it were, even if the cognitive dimension is not exhaustive of reality). An argument needs to be made, therefore, to the effect that we've reached the terminus ad quem in the search for explanations and meaning or purpose, the burden of proof rather weighty in this instance. We are inclined toward the search for purpose and meaning, and rightly so, because much of the world is the product of our own hands, even if dependent on materials bequeathed to us and not always the product of deliberate or conscious design.

Thank you, Patrick. It's always a good sign when I have posted something that provokes you to write a comment that takes me longer to process than the writing of the original post! In a word, I float somewhere among the physically determined, the random and indeterminate, and the normatively foundational. I haven't yet found a good place to land.