Kadish & Kadish on Honoring Law By Breaking It: Bringing Back Discretion to Disobey

That may be a bit of an exaggeration about the Kadish argument, since they say "rule departures" rather than "violations" or "breaking the law," but it is an intriguing argument nonetheless.  Admittedly not so much a legal ethics argument as an ethics one [on the concept of law and the philosophy of law-deviations and 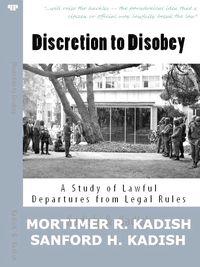 civil disobedience], but I felt it appropriate to blog on it here because it is part of a larger project I am working on--more on that soon--that certainly does include works on legal ethics and the legal profession.

Mortimer and Sanford Kadish first published their classic study of rule departures within law in 1973, by Stanford U. Press, and I am republishing it as a digital book with permission (and I made new covers, left). Here is the Amazon site featuring it and allowing its download. It is in the form of a Kindle book but is also fully compatible with free ereader apps on PC and laptops, Mac, iPhone, BlackBerry, and iPad. (Weirdly, Kindle books read better on the iPad than iBooks do, since their own iBooks makes you strip the linking of footnotes and other necessities of law books.)  It's my first follow-up after bringing back Warren & Brandeis, The Right to Privacy (both digital ebook, and in paper, right) last month, with blogging here.  Discretion to Disobey is

part of a series I want to do, Classics of Law & Society, so feel free to write me if you want to digitize your own classic work and believe you hold at least its digital rights (this means you, Nell Harper Lee, though Ronald Dworkin should still ask too, or for that matter anyone with a timeless book--so in fact I am working on some legal history and judicial biography works, and others that should be available for downloads.)

The Kadish book is certainly a recognized classic:  people were arguing about it from when it first came out.  One reviewer wrote that "the paradoxical idea that a citizen or official may lawfully break the law" surely "will raise the hackles" of a positivist.  (I'd also gladly publish Hart's rejoinder, The Concept of Law 2:  Positive Vibes.)  Both citizens and government actors, the book argues, have the power and the right to deviate from law in certain contexts and yet not act illegally in a sense, because law itself contains strands of adaptations to its own departures that the authors weave into a sustained jurisprudential whole. Mortimer Kadish (1916-2010) was a much-published philosophy professor at Case Western, while his brother Sanford became dean at Berkeley's law school and remains an accomplished professor and scholar there.  This book is truly a joint product of the fields of philosophy and law.  I hope it's of interest to some of our readers (I bet Patrick S. O'Donnell has read it, and may have even assigned it to his classes).  If you have a similar classic that needs to be easily read again, or a new manuscript (including Patrick), let me know....

UPDATE:  Kadish and Kadish is now available in 8 other formats, including PDF and ePub, at Smashwords.  It is featured with reviews and its history, at quidprobooks.com, with other new ebooks.

Listed below are links to weblogs that reference Kadish & Kadish on Honoring Law By Breaking It: Bringing Back Discretion to Disobey:

I need to meet this doppelgänger.

As to the argument of Kadish and Kadish, it finds some contemporary resonance or relevance in two recent works in legal theory and philosophy of law: first, in Allen Buchanan’s Justice, Legitimacy and Self-Determination: Moral Foundations for International Law (2004). He makes an argument for the “morality of illegal legal reform” in international law, specifically, with regard to violations of the UN-based law of force (as in the Charter). Buchanan argues for the possibility and necessity of “illegal acts directed toward legal reform...[that] can be consistent with and may even be mandated by a commitment to the [Kantian- or Natural Law-like] Natural Duty of Justice and the rule of law as an embodiment of justice.” Buchanan wants to reform the law of humanitarian intervention through treaty outside the system of UN-based law without undermining the principled foundations of international law as such. This is an intriguing international extension and application of civil disobedience: “Progress toward justice is especially likely to require illegal acts if the system’s imperfections include serious barriers to expeditious, legally permissible reform.” The law-breaking in this instance is within the context of and complemented by a “treaty-based, rule governed intervention regime whose members would be restricted to the most democratic, human-rights respecting states.” As Buchanan explains, “the idea is to create a new system of rules—new principles, processes and institutions—that embody the normatively rich conception of the rule of law. The point is that an action may violate the law and yet be LAWFUL—that is, mindful of the importance of law understood in the normatively rich way—and hence may be consistent with, and even be an expression of, the commitment to the rule of law thus understood.” Alas, Buchanan makes no mention of Kadish and Kadish in his discussion.

The other book I have in mind is Property Outlaws: How Squatters, Pirates and Protesters Improve the Law of Ownership (2010) by Eduardo Moisés Peñalver and Sonia K. Katyal. If I’m not mistaken, they too do not reference Kadish and Kadish.

For the record, I much prefer reading books the old-fashioned way, although I wish you success in your digitizing endeavors.