NOW President Terry O'Neill was for years a colleague of mine on the Tulane faculty -- and a popular teacher on subjects including legal ethics, and influential writer on the social and community effects of corporate control rules.  Before that, she was a law graduate of Tulane and undergrad at Northwestern U, a partner in a NOLA law firm, and a prof at UC Davis and Denver. She is shown far right with other NOW officers. 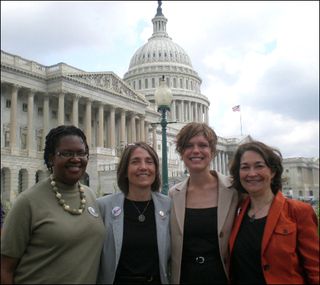 We miss her but she has certainly gone on to great things.  Here is part of her appearance on Joy Behar's show on HLN.  She, Gloria Allred, and others are weighing in on the David Letterman workplace situation.  NOW is particularly not happy with how the media has trivialized it, and how unrepresented women are in CBS's corporate governance.  (See how writing law review articles can actually inform one's real life?)  Here is Terry O'Neill's press release on the David Letterman scandal, noting for all of us, not only constituents and women, why that kind of situation is harmful:

Every woman -- and every man -- deserves to work in a place where all employees are respected for their talents and skills. The National Organization for Women calls on CBS to recognize that Letterman's behavior creates a toxic environment and to take action immediately to rectify this situation. With just two women on CBS' Board of Directors, we're not holding our breath.

And here is an earlier Huff Post column by former NOW president Patricia Ireland on why Terry O'Neill should be elected president -- O'Neill's platform was to take NOW back out into the world, blogs, TV, Twitter, and locally, instead of the opponent's reported agenda, says Ireland, to keep it an inside-the-beltway DC lobbying organization focusing on formal legal positions.

Obviously the fulfillment of that platform is their taking public and media-rich stands against Letterman, Roman Polanski, and other famous events (and especially how the media cover them without recognizing the victims in a serious way).  The NOW press release by Terry about the health care plans and reproductive rights is here and her YouTube vid on public option is here as "absolutely essential."

Listed below are links to weblogs that reference NOW President Terry O'Neill, Lawyer and Former Law Prof, Speaks Out Against Letterman et al.:

Letterman is fine; he never was the “Family Values” type. Yes, he probably cheated on his girlfriend now wife. But at least he does go around claiming he is Mr. “Family Values” like some of our politicians/ preachers (can you just see the grin on all “Fake News” reporters/ commentators and the Palin fringe). This has been a tough summer, for Dave, for our economy but at least he did not end up on the “Republican 2009 Summer of Love” list: Assemblyman, Michael D. Duvall (CA), Senator John Ensign (NV), Senator Paul Stanley (TN), Governor Mark Sanford (SC), Board of Ed Chair, and Kristin Maguire AKA Bridget Keeney (SC). Did I miss NOW memo of outrage with Senator John Ensign? They are so irrelevant.