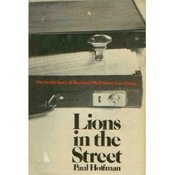 I have been reading Paul Hoffman's 1973 classic, Lions in the Street: The Inside Story of the Great Wall Street Law Firms.  Before writing the book, Hoffman was a reporter covering the legal beat for the New York Post.  For someone reading the book in 2008, it is a fascinating contemporaneous account of Wall Street lawyers circa 1970.  With the distance of nearly 40 years, it also reveals what is timeless about lawyers' preoccupations.

Here is a passage that I will use to explore the meaning of partnership in my course materials for our new Legal Professions course (from Hoffman's Chapter 4, entitled "Some Partners are More Equal than Others"):

There's a story told about a lawyer at Chadbourne who never spoke at partners' meetings.  For years he sat silent while his colleagues debated and decided the future of the firm.  Then, at one meeting, the promotion of associates to partnership was being considered.  A name was put before the panel.

The long-silent partner ahem-ed for attention, and the others bent forward, wondering what words of wisdom he had to utter at so long last.

There's nothing in the books--or partnership agreements--that says partners have to like each other.  Some [Wall Street] firms manage to exist ... with the members barely even speaking to each other.  But the partners have to find some sort of accommodation if the firm is to remain viable.

Most of the disputes come down to money (that may be a surprise to some, especially those who hold to ideas of the good ole days).  Hoffman provides loads of anecdotes on "pie-hacking sessions."

Another striking feature of Hoffman's book is how many Wall Street name partners spent time in government, or left Wall Street and started a DC firm after a prominent political appointment. These partners were the paradigmatic "lawyer-statesmen" of Anthony Kronman's The Lost Lawyer (1993).  But Hoffman's book, which reviews the lineage of virtually all the major Wall Street firms, implicitly makes the case that government service eventually produced a booming law practice.  In an era in which talking to the press could open the door to charges of unethical solicitation (norms changed radically after Bates and the subsequent rise of the legal press in the late 1970s), newspaper coverage of public service presumably had special value.  Not surprising, partners were willing to subsidize these activities.

Is it possible that the value of public service (as, essentially, a loss leader) became watered down by the courtroom and boardroom coverage of The American Lawyer, National Law Journal, and other publications?   Questions like these come to mind as I flip through the pages of Hoffman's lively book, which reads like a novel.  I highly recommend it.

Listed below are links to weblogs that reference Wall Street Partnerships and Public Service, circa 1970:

Erwin Smigel's book, The Wall Street Lawyer, is another good read of this period. Incidentally I was interviewing a former partner of one of the smaller elite law firms in New York and when I asked him if this induced more collegiality, he looked at me as if I were off-beam and said, "No, the discussion was about how we could make more money!"