On the Cost of Legal Education

Why is the cost of attending law school high relative to lawyer starting salaries, and rising relative to inflation? Here are three reasons that the scambloggers never seem to mention.

The first is Baumol’s Cost Disease. The idea here is that in certain labor-intensive industries (such as education), there is little productivity growth over time. Car manufacturers automate; farmers have better equipment and pest-resistant seeds; but law school is still taught much the same way it was 50 years ago. Unless and until we see widespread adoption of online learning technology or other types of teaching-efficiency enhancements, the cost of higher education likely will continue to increase more than rate of inflation.

The second is increased reporting requirements. Twenty years ago law schools gave some basic data to the ABA and that was it. Today we collect and give a lot more data to the ABA, and then we format it exactly like they want it for our website, and we do the same for U.S. News, and the transparency movement wants still more. Many law schools now have a full-time data-reporting officer. Our Career Services Director spends almost as much time tracking student outcomes as she does helping students find jobs. Transparency is great in the abstract, and abuses in the past make today’s demands for more transparency reasonable. But all this data collection and dissemination isn’t free – it comes at a cost that ultimately must be paid from student tuition. And the fixed costs of compliance weighs particularly heavily on small law schools that are unable to distribute the costs among a large student body.

The third factor contributing to higher costs is that faculty (and decanal) salaries are influenced by the anomalous bi-modal wage distribution of starting salaries for lawyers. As this chart makes clear, lawyer salaries follow more-or-less a normal bell curve in the $45,000-85,000 range, then spike strongly in the $155,000-165,000 range. The problem for law schools is that many of the faculty we want to hire (especially the folks who can teach corporate, tax, and estate planning law) are in that right-hand spike, and to attract them we need to be at least in-the-ballpark competitive. Even so, although law faculty may earn modestly more than the average (mean, median) starting salary of a practicing lawyer, they earn far less than the lawyers on the bigfirm partnership track. 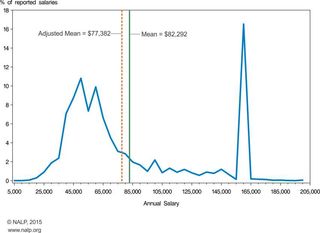 I suspect that University of Michigan is not representative of all U.S. law schools.