Two of the most interesting (with images to boot) recent ones were:

The 10 Worst Design Fails of the Past 25 Years

I've found that lists like these can really stimulate good discussions when teaching land planning as many of the students who end up taking the course seem to be very visual learners.  Enjoy.

This Article advocates a wider judicial recognition of nuisance actions based on aesthetic considerations. Contrary to the majority of legal opinion to the contrary, it is argued that a right to enjoy property should include a right to be free from non-invasive aesthetic or visual nuisances. With modern real estate appraisal methods making it possible to express community aesthetic preferences in monetary terms, courts are now no longer prevented from using these tools in assessing injuries to real estate. Thus, determinations of aesthetic nuisance actions are not any more subjective than the current task of courts in the context of aural and olfactory nuisance disputes. Indeed, the judiciary should resolve conflicts emanating from the unaesthetic uses of land through the Restatement of Torts “objective” balancing test in order to determine what, according to prevailing community standards, is reasonable under the circumstances.

The expanded popularity of aesthetic zoning in many municipalities demonstrates anew the social value of aesthetics and thereby illustrates with clarity a very conscious relationship which exists between economic development and American nuisance law. Judicial recognition of police powers to enforce zoning regulations of this order contradicts - clearly - the heretofore seen reluctance of the Common Law to confront aesthetics in the realm of nuisance and thus invites a more contemporary and enlightened judicial response to this legal issue. 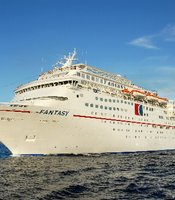 The talk in Charleston these days--apart from Boeing's decision to build a new manufacuturing center nearby--focuses primarily on proposed plans to construct an upgraded terminal for cruise lines--specifically for Carnival, doubling the current number of cruises departing from the Holy City.  Even though Charleston boasts a seafaring past, the land use community's reception to the proposal has been mixed.  By way of example, for those who've visited Old San Juan, Puerto Rico, on a busy day when thousands of tourists pour from multiple muti-story cruise ships and overwhelm local infrastructure, similar developments in Charleston may not be such a good thing.  To this end, preservationists are weighing in, pro and con, on the proposed two-story system of shops, dining, and lodging planned for the area adjacent to the terminal.  Striking the right balance between tourism, economic diversity, quality of life for local residents, and preservation of historic resources is never easy, but public discussions on the topic suggest that local consensus may be reached.  Click here and here to learn more.  New York design firm Cooper Robertson & Partners, which has already designed several public buildings in historic Charleston (Visitors Center, Judicial Center, College of Charleston School of Education) has been selected to do the work.

Will Cook, Charleston School of Law

Of (Tiger) Woods and Trees and Land Use

Ben Barros points us from Property Prof Blog to an article by Christopher Beam in Slate's "Explainer" feature titled Stopping by Woods: Tiger Woods' car crash caused $200 worth of damage to a tree.  How do you measure that?

According to the article, it turns out that there is some methodology for valuation of trees as property.  It involves a number of factors that you may not find surprising: size, age, species, repair/replacement costs, aesthetics, neighborhood context, contribution to the (literally) underlying real estate value.  There is even a professional Council of Tree and Landscape Appriasers, which publishes the Guide for Plant Appraisal (9th ed.) that instructs one in the methodology of the Replacement Cost Method and the Trunk Formula Method.

This makes eminent sense to anyone involved with land use or real estate.  Trees are a significant contribution to both the hard value of real estate and the more subjective aspects of land ownership or use (beauty, sentimentality, shade).  Both builders and buyers today place a great deal of significance on the contribution of trees to the overall value of any particular piece of land.  It is also a matter of public interest, and tree ordinances have, um, sprouted up in many cities in the U.S. as an intergral component of land use planning.

But all of this is built on the anthropocentric presumption that a tree is in fact a thing that can be reduced to property and "owned" by humans.  Would it be possible to have . . . a tree that owned itself?  Most of you property law experts out there would say no.  But one U.S. city says--yes!  And UGA Prof. Jamie Roskie knows exactly where this is:

Athens, Georgia, of course.  You may have heard of Athens' famous Tree That Owns Itself.  It is a popular tourist attraction, dating from sometime between 1820 and 1832, when Colonel W.H. Jackson executed a deed purportedly conveying ownership of his favorite tree to . . . itself:

I, W. H. Jackson, of the county of Clarke, of the one part, and the oak tree . . . of the county of Clarke, of the other part: Witnesseth, That the said W. H. Jackson for and in consideration of the great affection which he bears said tree, and his great desire to see it protected has conveyed, and by these presents do convey unto the said oak tree entire possession of itself and of all land within eight feet of it on all sides.

Here we are (apparently the current tree is the "son" of the original): 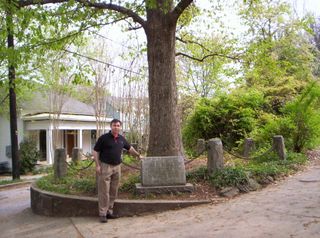 I wouldn't recommend trying to use any of your fancy human-based property law theory, what with your common law and your learned treatises and whatnot, to mess with the Tree That Owns Itself.  The alleged deed may be lost, and there may be rules about capacity and so forth, but as a point of civic pride most Athenians will agree that the Tree does own itself.  It is accorded self-"ownership" rights through longstanding (if perhaps winking) local custom.  The real property records and plat book do not show the Tree as part of any adjacent property (it's in the public right of way).  Furthermore, Ol' Reliable (i.e., Wikipedia) cites a 2006 statement by county Landscape Administrator Roger Cauthen to the effect that it is the official position of the Athens-Clarke County government that the Tree does, in fact, own itself.  At any rate, it's legally protected as a historic landmark tree.

Anyway, it's a good thing Tiger Woods wasn't living nearby in Athens, or else one of Prof. Roskie's former students might have had the chance to represent the Tree (or perhaps the Tree's recognized caretaker Athens Junior Ladies Garden Club as next friend) on contingency.

During my recent visit to Colorado I was fascinated by the discussion of "pops and scrapes."   This is Boulder parlance for developers who buy up small post-war houses and either add on by popping up the roofline, or scrape the house off the lot and build something much larger.  This photo, taken in a Denver neighborhood with my husband's cell phone camera, gives an idea of this phenomenon. 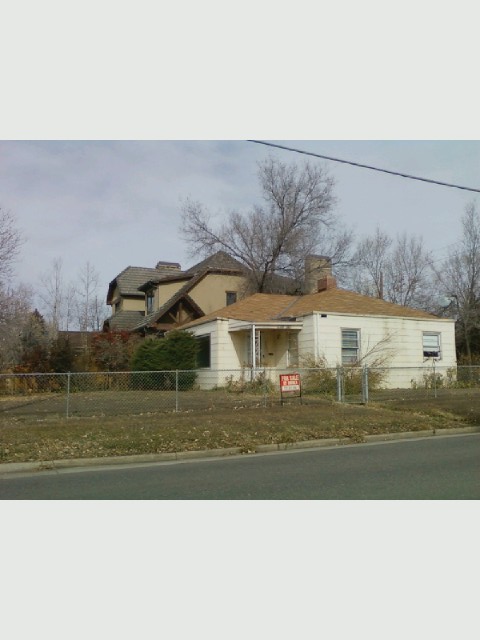 There has been sharp debate in Boulder (and in many other communities around the country, including Atlanta) about limiting the size and scale of these additions or rebuilds.  Folks in the smaller homes around the McMansion-style rebuilds resent the shadow cast by these larger homes, and want something more compatible with existing homes.

On the other hand, one Denver realtor we spoke with said that the sagging economy has largely put an end to this practice, because developers just can't flip these larger houses the way they used to.  In the meantime, though, many of these homes linger on the market.

Props to Planetizen for posting this first.  Apparently, the owner of a BBQ joint in eastern PA is being cited because the meat smoker she uses in the public right-of-way has been determined by the local zoning board to be a sign. The town solicitor backs the board on this.  Are there no regulations against simply blocking the right-of-way?  Anyway, must give them points for creativity.