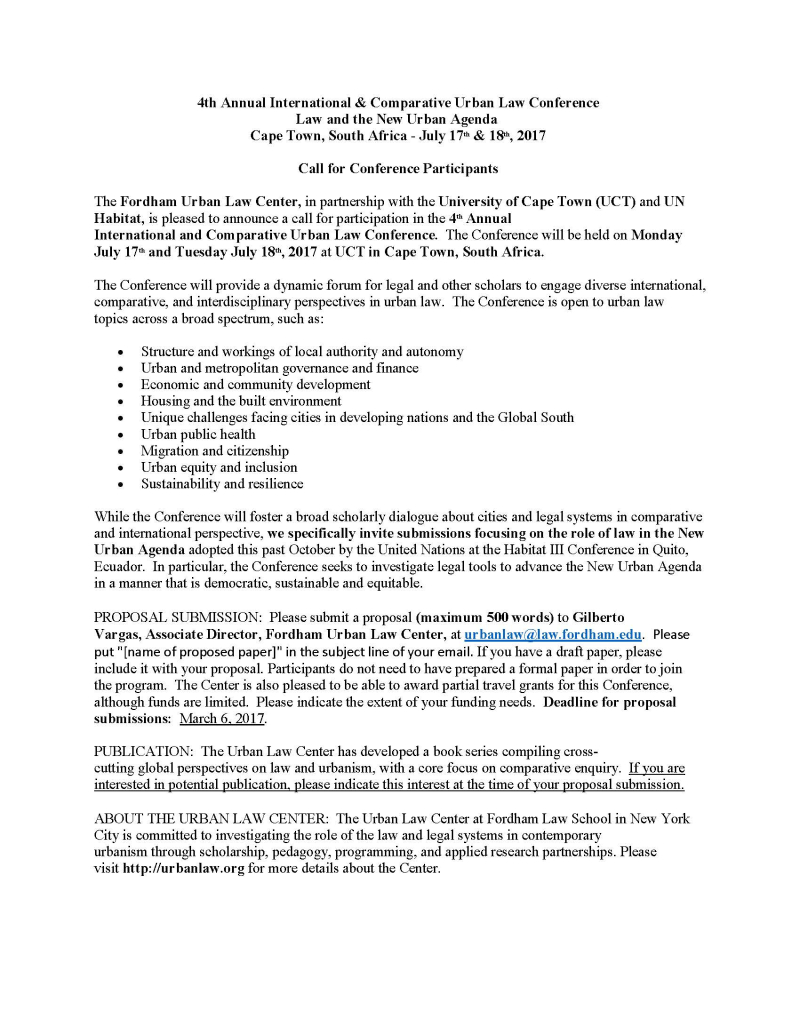 A new conservation easement case from Maine’s highest court is a lesson in statutory interpretation.

In 1997, a landowner granted a 100-acre conservation easement to a local land trust for preservation in perpetuity of the land in its natural state to protect scenic views and open space values. At some point in the intervening years, the conservation easement was transferred to a successor in interest land trust and the parcel was divided into three. The 100 acres are now held by the town, a developer, and a trust that is the successor to the original landowner. The opinion does not detail the exact spatial arrangement or acreage, but notes that the Trust has the smallest acreage. (I could not tell if the Trust land is physically adjacent to the Town property.) The Town now seeks to develop its portion of the land into a public beach, which will include relocating a bath house, repairing some roads, and building a parking lot. The Land Trust has determined that such activities are in line with the purposes of the conservation easement and approved of the Town’s proposal. The Trust is not happy though and argues that these changes are violations of the conservation easement.

In my non-day job, I am a board member of a local neighborhood association in Boise.  A major upcoming issue in our historic neighborhood is the Salvation Army's closure of a 1921 building known as the Marian Pritchett School, which has provided a home and education for young mothers for nearly a century.  That building, which has a mid-century addition, sits on an entire city block in Boise's oldest residential neighborhood, called the North End.  (Full disclosure:  I live two blocks away from the site.)  The Salvation Army is seeking to sell the building for as much as it can in order to fund a new building several miles away.

The availability of an entire block in this otherwise fully urbanized neighborhood is, quite literally, a once-in-a-generation opportunity.  The question is:  what to do with it?  I am looking for examples from around the country where historic structures have been paired with private development in a project of this scale to (i) preserve the historic building and (ii) confer a public benefit.  There is also a lovely neighborhood park within a block of the site, further enhancing the project's appeal.  One possibility that may be on the table:  the city may be leaning towards up-zoning the site to permit high-density residential in this otherwise single-family neighborhood.  If it does so, the additional revenue to the private developer should permit the conveyance of a public benefit, such as perhaps the operation of a public arts or play program in the adjoining park.  I'd welcome any examples, especially of projects at this scale, that would illustrate how other communities have permitted density in singel-family neighborhoods while also preserving historic structures and enhancing the community at large.  Other interesting projects also welcome.  You can e-mail me at millers <at> uidaho.edu.

(Article about the house here.) 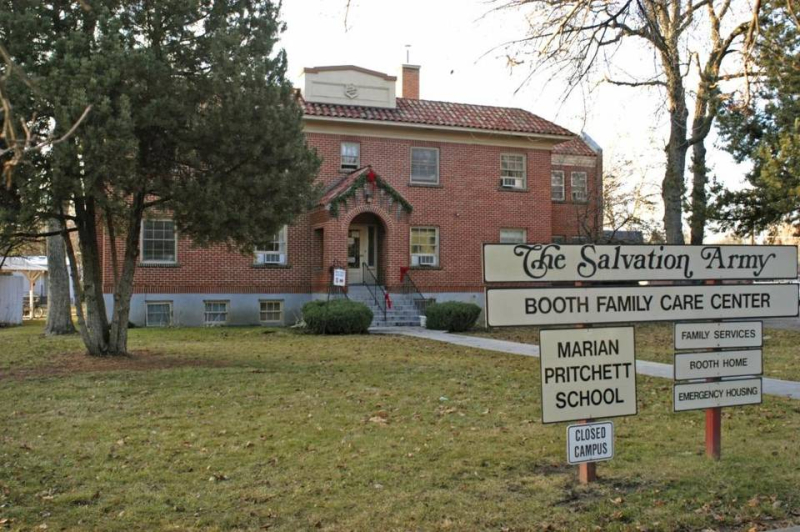 Our Land, not Trumpland

A "huge crowd" at today's march in Boise.  Not unexpectedly, my sign was land use-themed. 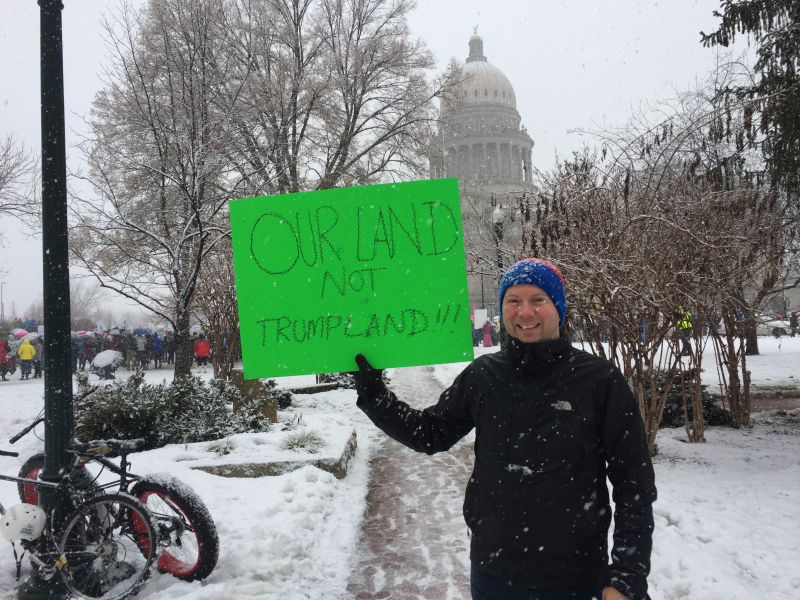 Schleicher on the Economic Consequences of Residential Stability

David Schleicher (Yale) has just posted a new article, Stuck in Place: Law and the Economic Consequences of Residential Stability.  Here is the abstract:

America has become a nation of homebodies. Rates of inter-state mobility, by most estimates, have been falling for decades. Even research that does not find a general decline finds that inter-state mobility rates are low among disadvantaged groups and are not increasing despite a growing connection between moving and economic opportunity. Perhaps more important than changes in overall mobility rates are declines in mobility in situations and places where it is particularly important. People are not leaving areas hit by economic crises, with unemployment rates and low wages lingering in these areas for decades. And people are not moving to rich regions where the highest wages are available.

This Article advances two central claims. First, declining inter-state mobility rates create problems for federal macroeconomic policy-making. Low rates of inter-state mobility make it harder for the Federal Reserve to meet both sides of its “dual mandate” of stable prices and maximum employment; impair the efficacy and affordability of federal safety net programs that rely on state and local participation; and reduce both levels of wealth and rates of growth by inhibiting agglomeration economies. While determining an optimal rate of inter-state mobility is difficult, policies that unnaturally inhibit inter-state moves worsen national economic problems.

Put together, the Article shows that big questions of macroeconomic policy and performance turn on the content of state and local policies usually analyzed using microeconomic tools. Many of the legal barriers to inter-state mobility emerged or became stricter during the period in which inter-state mobility declined. While assigning causality is difficult, public policies developed by state and local governments more interested in local population stability than in ensuring successful macroeconomic conditions either generated or did not push back against falling mobility rates. The Article concludes by suggesting ways the federal government could address falling mobility rates.

The article was also recently featured in Slate.

When you want to travel fashionably...

Vogue named Idaho one of the world's top 10 travel destinations of 2017.  I look forward to welcoming the land use glitterati among you to our fabulous state this year!

From the Vogue write-up...

7. Idaho
Idaho is having a moment. The capital, Boise, may not have an Ace Hotel yet, but it’s quietly setting itself up to be one of America’s most desirable second-tier cities with hip lodging like the Modern Hotel + Bar, indie coffee shops, creative hubs, distilleries, and a serious craft beer scene. And then of course, there’s the incredible access to the outdoors, including more than 190 miles of trails to hike, run, and bike in the Boise Foothills. Hemingway’s beloved Sun Valley, while often overlooked for glitzier mountain towns like Telluride, Park City, and Jackson Hole, is having a renaissance. America’s first destination ski resort area offers some of the best slopes in the U.S. and still maintains a laid-back mountain-town feel (think Aspen in the ’60s). The December 30 opening of the Limelight Ketchum, the first new hotel in more than two decades, will bring some youthful energy to the mountains. And this March, the Sun Valley Resort will host the U.S. Alpine Championships for the first time since 1951. Farther afield, Selkirk Powder Company recently announced it will be offering heli-skiing trips to the Idaho panhandle beyond the Schweitzer Mountain backcountry, giving adventurers access to the rugged and untapped American Selkirk Range of northern Idaho.

I am delighted to be the chair of the newly-formed Sharing Economy Committee of the ABA State and Local Government Section.  We will be sending more information about the committee very soon.  In the meantime, please feel free to e-mail me (millers@uidaho.edu) if you are interested in participating in the Committee.  You do not need to be a member of the ABA to participate.

We will have an organizational meeting later this month, at a date to be determined.

Jamila Jefferson-Jones (UMKC) is the vice chair of the committee, and you can also feel free to reach out to her, as well.

As some may know, Jamila and I are working on the ABA's forthcoming State and Local Government Sharing Economy Manual, which we hope to have out in late 2017.