[This post is part of a series on wildfire planning.  View previous posts in this series at the bottom of the page.  Download the full wildfire planning guide from which these posts are excerpted, here.]

The “wildland-urban interface” is a term commonly used but seldom precisely understood.  There is good reason for that:  the meaning of the term varies tremendously.  There are at least three important ways to think about the WUI:  as a policy definition; as a legal definition; and as a variable concept that changes along with development patterns over time.  This variation does not indicate the term is “meaningless”; it does mean, however, that context matters and such context must be closely evaluated throughout the WUI wildfire planning process.

The WUI as a policy definition emerged primarily out of the work of demographers and sociologists that were trying to give form to a development phenomenon happening across the country.  People were not just moving from the cities to suburbs, they were moving further out into agricultural lands and, in western states especially, onto the ridgelines of foothills and into areas adjacent to federal lands that previously had little habitation.  Different approaches to defining the WUI emerged, which included prioritizing either a designated area on a map or a set of conditions which contributed to wildfire risk.[1]  In 2001, a federal report adopted a definition of the WUI as “where humans and their development meet or intermix with wildland fuel.”[2]  In 2006, the Forest Service adopted a similar policy definition that:  “The WUI is the area where structures and other human development meet or intermingle with undeveloped wildland. Wildland urban interface is any area containing human developments, such as a rural subdivision, that may be threatened by wildland fires.”[3]  Since that time, other researchers have sought to quantify that definition, with some researchers offering alternative WUI definitions, as illustrated in the graphic below:[4]

Independent of these policy definitions, there are additional legal definitions of the WUI that are especially important for wildfire planning.  Many wildfire-related laws and regulations apply specifically to the WUI, but different laws can have different requirements for how the WUI is defined.

For instance, the Healthy Forest Restoration Act of 2003 (HFRA) provides a complicated definition of the WUI.  On the one hand, if a community has adopted a WUI definition in a CWPP, federal agencies will abide by that determination.  If no community has not done so, however, an alternative default definition is supplied.[5]

This definition of WUI is very important to wildfire planning under HFRA; indeed, some funding through the law can only go to areas defined as the WUI.  As a result, this legal definition of WUI has an important role to play in whether local communities are eligible for funding under HFRA.  If a local community drafts a community wildfire protection plan (CWPP), that community can define the WUI for purposes of HFRA at a local level and in a manner generous to the community.  If the community fails to complete a CWPP, this default definition will impose a very limited interpretation of the WUI.  Take, for example, the definition of the WUI from this recently-completed Teton County, Idaho CWPP: 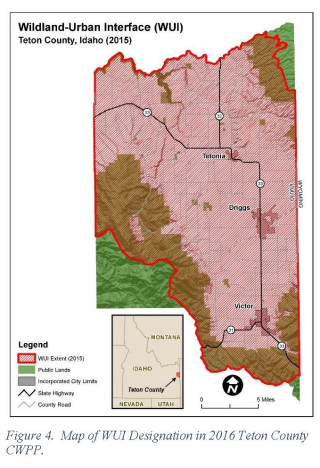 This CWPP map presents a legal WUI definition for Teton County that covers all of the private property—including urban areas, commercial properties, infrastructure and other community amenities—and some federal lands in the county.  This illustrates that the legal definition of the WUI under HFRA can vary substantially from the default rule when a community undertakes to define the process.  This map also illustrates that the legal definition of the WUI for purposes of HFRA provided by this map can also vary from policy definitions of the WUI, which would typically not include urban areas such as the cities within the county.

Further, it should be noted that legal definitions of the WUI can vary by statute or even executive order.  For instance, in May, 2016, President Obama signed an executive order that required federal buildings in the WUI to meet certain wildfire standards defined by the order.[6]  However, the order also stated that, “[w]hen determining whether buildings are located within the wildland-urban interface, agencies shall use the U.S. Department of Agriculture Forest Service's, ‘The 2010 Wildland-Urban Interface of the Conterminous United States,’ or an equivalent tool.”[7]  Here is how that map defines the WUI in Teton County: 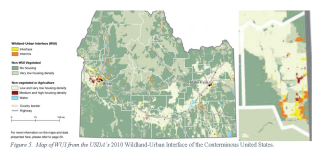 In this legal WUI definition that applies to the President’s executive order, there is only a small portion of Teton County in the WUI even though, for purposes of HFRA, all private property in the county is within the WUI.

The purpose of investigating this difference is to illustrate that legal definitions of the WUI can vary, even among legal tools.  In planning for wildfire, it is important to make sure that all relevant legal considerations are addressed in defining the WUI both for compliance with federal and state laws, but also for integrating with planning, building, and fire functions of local governments.  For instance, coordinating the CWPP definition of the WUI with a local government’s definition of the WUI in its comprehensive plan and development codes facilitates the alignment of federal, state and local policies.  In particular, it ensures that different departments within larger local governments—such as fire departments, planning departments, and building departments—are working toward a common vision of the areas subject to WUI wildfire risk and thus necessitating additional wildfire preparedness.

Finally, it is important to remember that the concept of the WUI is a fluid one.  As development occurs, an area that was once the WUI may become a bona fide suburb or even a town center of its own.  Similarly, as properties undertake mitigation efforts such as hazardous fuel treatments or building construction changes, WUI risk levels can change.  For this reason alone, WUI wildfire planning requires an ongoing process that responds to the pace and scale of development along the urban fringe.

[1] See Office of Inspector General, U.S. Dep’t of Agric., Audit Report:  Forest Service Large Fire Suppression Costs i n. 1 (2006), http://www.usda.gov/oig/webdocs/08601-44-SF.pdf, archived at http://perma.cc/9YDE-LS2P; see also Urban Wildland Interface Communities Within the Vicinity of Federal Lands That Are at High Risk from Wildfire, 66 Fed. Reg. 752,753 (Dep’t of Agric. Jan. 4, 2001) (notices) (defining the WUI as “where humans and their development meet or intermix with wildland fuel”); Headwaters Econs., Solutions to the Rising Costs of Fighting Fires in the Wildland-Urban Interface 5 (2009), http://perma.cc/45TW-GLVU (In the western states, “on average 3.2 acres per person are consumed for housing in the wildland-urban interface, compared to 0.5 acres per person on other western private lands.”).

[5] The HFRA definition is as follows:

(A) an area within or adjacent to an at-risk community that is identified in recommendations to the Secretary in a community wildfire protection plan; or

(i) an area extending ½ -mile from the boundary of an at-risk community;

(ii) an area within 1 ½ miles of the boundary of an at-risk community, including any land that--

(I) has a sustained steep slope that creates the potential for wildfire behavior endangering the at-risk community;

(II) has a geographic feature that aids in creating an effective fire break, such as a road or ridge top; or

(III) is in condition class 3, as documented by the Secretary in the project-specific environmental analysis; and

Previous posts in this series:

Part 2: The Price of Wildfire