Beginning this week, Land Use Prof Blog is hosting a series of posts that are excerpts from book chapters in the recently released Contemporary Issues in Climate Change Law and Policy:  Essays Inspired by the IPCC.  The book was co-edited by Robin Kundis Craig (Utah) and me.  The posts will progress in the order of the book's chapters.  We begin today with an excerpt from Prof. Craig's chapter, "Climate Change, Sustainable Development, and the IPCC’s Fifth Assessment Report."  Read Prof. Craig's entire chapter here.

In this excerpt, Prof. Craig argues that there are three models of sustainable development that have emerged in relationship to environmental law.  Citations are omitted. 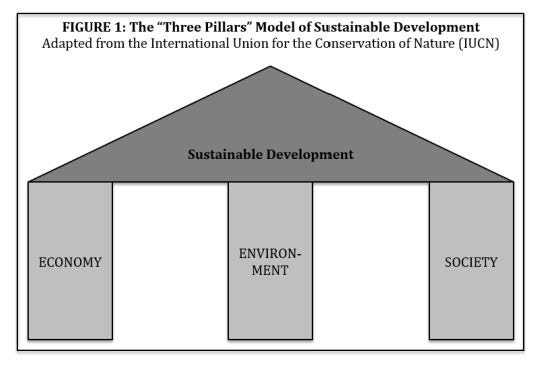 This conceptual view of the social and economic pillars as independent helps to explain the difference between “weak” and “strong” sustainability. “Weak” interpretations of sustainable development view human and physical capital as  adequate substitutes for natural capital in the environment in terms of “the total capital stock passed onto the next generation. . . .” In this view, for example, an increase in roads might be deemed an adequate substitute for loss of wetlands in terms of resources left to the next generation. Weak sustainability perspectives thus underplay the ultimate dependence of all human societies and economies on functional ecosystems. In contrast, “[s]trong sustainability demands the protection of critical natural capital because once lost, these assets are lost forever, and they cannot be recreated.” “Critical natural capital” are the natural resources “required for survival,” including both functional resources such as the ozone layer and valued resources such as rare species or species helpful to medical care.

Unlike the three pillars model, the interlocking circles model of sustainable development (Figure 2) more clearly communicates “the need to integrate thinking and action in sustainable development across traditional disciplinary boundaries and established policy-making departments. . . .” Indeed, the IUCN, in its Programme for 2005–2008, adopted “the interlocking circles model to demonstrate that the three objectives need to be better integrated, with action to redress the balance between dimensions of sustainability. . . .”[16] The middle area of overlap represents the area in which the goals of all three spheres are all maximized—i.e., “the possibility of mutually supportive (‘win-win-win’) gains” in all three areas (economic, social, and environmental) simultaneously. Moreover, “[t]he small area of overlap relative to the whole sphere portrays the unsustainable nature of much activity, but also opens the idea of the potential to expand this area of positive overlap.” 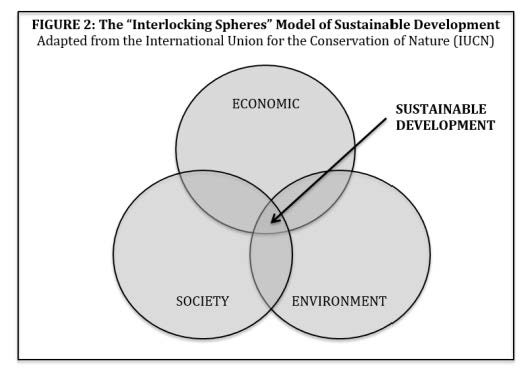 this model supports understandings that achieving sustainable development in practice regularly involves trade-offs across the different spheres; that difficult choices have to be made at particular points in time and at particular scales as to what is being pursued and how; that certain goals can be compromised in the achievement of others; and that any action will carry unequal impacts for particular interests and for groups of people. An important but often overlooked aspect of the overlapping spheres model is the concept of tradeoffs. Specifically, the small area in the center representing true sustainable development is the product of tradeoffs among the three areas. As such,

this model supports understandings that achieving sustainable development in practice regularly involves trade-offs across the different spheres; that difficult choices have to be made at particular points in time and at particular scales as to what is being pursued and how; that certain goals can be compromised in the achievement of others; and that any action will carry unequal impacts for particular interests and for groups of people.

The interlocking circles model thus also supports the idea that sustainable development requires systems thinking—that is, an approach that acknowledges that society, economic development, and the environment exist as complex interactions rather than isolated arenas. The IUCN, for example, has identified “two fundamental issues” for sustainable development, “the problem of environmental degradation that so commonly accompanies economic growth, and yet the need for such growth to alleviate poverty.”

However, like the three pillars model, the interlocking circles model treats the three areas of focus as equal and somewhat commensurable—i.e., it suggests no limits on humans’ ability to trade improvements in one sphere (say, economic development) for degradations in another (say, the environment). As such, the interlocking spheres model, like the three pillars model, can support a weak sustainability approach that undermines the environmental “bottom line” of human existence. Environmental limits do emerge, however, in the third model of sustainable development, the nested circles model (Figure 3). In this model, “the spheres of economy and society are shown as embedded in a wider circle of ecology,” portraying “an understanding of environmental limits setting boundaries within which a sustainable society and economy must be sought.” Furthermore, this model acknowledges that “activities that damage the functioning of natural systems ultimately weaken the basis of human existence itself.” Thus, this model underscores that the societal and economic goals within sustainable development ultimately depend on a rich and well-functioning environment that supplies at the very least critical natural capital and preferably more extensive ecosystem goods and services.