Land Use and the Law of Armed Conflict 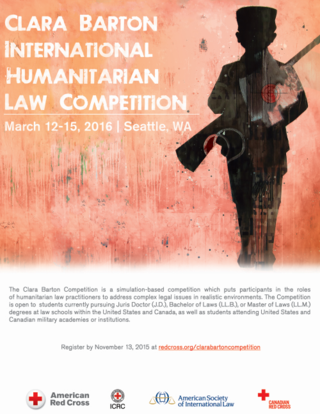 What does the law of land warfare have to do with the law of land use? Quite a lot, actually. Greetings from the Clara Barton International Humanitarian Law Competition,  sponsored by the American Red Cross and its IHL Section. Several property law issues are prevalent in the law of armed conflict.

I’m coaching my South Texas team (sponsored by the Frank Evans Center for Conflict Resolution) in this unique event that challenges students to advocate and role-play in realistic scenarios involving international humanitarian law (IHL), also known as the law of armed conflict (LOAC) or more traditionally, the law of war.

The LOAC/IHL is mostly focused on protection of persons, but it also covers a lot of property law. The bottom line is that wars and armed conflicts involve a lot of property issues—the rules about what actions armed forces can or must take with regard to public and private, real and personal property. There is a complex international law regime, codified through the Geneva and Hague Conventions, the UN Charter, and other treaties and customary international law, that deals with land and property rights.

Here at the American Red Cross IHL competition (named for ARC founder Clara Barton, who performed medical and humanitarian assistance during the Civil War, including a field hospital at the Fairfax church where I was married(!)), the scenarios included detainee interviews, targeting decisions, public relations, and international criminal court arguments. Several of the scenarios involved issues of seizure, occupation, requisition, and cultural protection of property. Other armed conflict issues include claims, restitution, and post-conflict governance questions such as titles, registration, and resolving property disputes. These property issues are governed by the international law of armed conflict.

While most of the public perception of the Red Cross is based on its important missions of disaster relief and blood donations, the movement was founded to establish and enforce international humanitarian law in the wake of disastrous nineteenth-century battles. The ICRC is the world's lead organization on this and you can read its Intercross blog; the ARC also has an important IHL section with the mission to educate, train, and promote IHL, which you can read about at the Humanity in War blog.

As some of you know, I have been busy over the past few years in my Army Reserve assignment as an Associate Professor of International & Operational Law at the U.S. Army Judge Advocate General’s School in Charlottesville, Virginia. I’ve been focused more on the law of land warfare than the law of land use. That’s why I haven’t been blogging much here at the Land Use Prof Blog, while Stephen Miller has been outstanding in continuing to lead this crucial forum for the land use academic community. Going forward, I plan to contribute some thoughts about the relationship between land use and the law of armed conflict, and more broadly, international property law . . . and also get back to blogging about land use here in the "unzoned city" of Houston.

Very cool, Matt! Glad to see you back.