Field notes on navigating a POPO

This weekend, my family and I rented a wonderful home in a mountain town of the great Northwest.  In the notes for the house was the following unusual invitation: 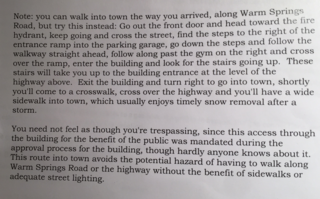 In other words, the ordinary way into town would be to follow a road that did not have a sidewalk; the alternative was to use a privately-owned public space, or POPO, that would allow us to cut through the condo building across the street, go up some stairs, and immediately be in a safe, pedestrian-friendly downtown.  Of course, the invitation to actually use a POPO was one that I couldn't turn down, the toddler and newborn in tow, notwithstanding.

But as the description in the house notes would suggest, knowing that there was a POPO that would provide easy access to the downtown was not readily advertised.  Here are a series of pictures I took that illustrate the serpentine route described in the house notes above.

Here is the approach.  Can you spot the POPO entrance? 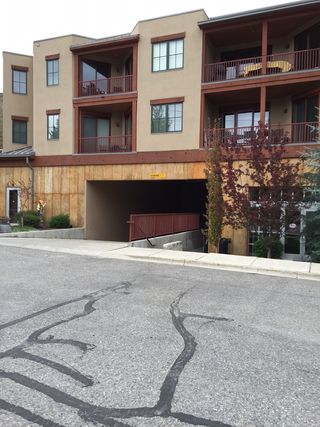 As with many POPOs, there is no signage indicating that there is a public space where the public can pass through the building.  Further, the route is not marked and is not easily determinable.

I had some trepidation taking my family beyond the inexplicably placed stationary bike and the deep abyss beyond. 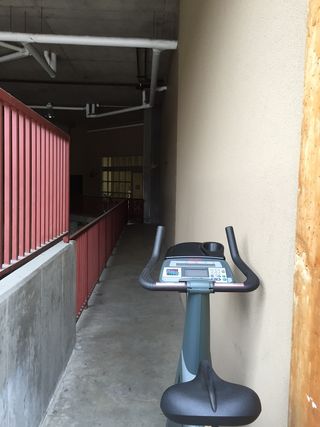 Past the bike was an unmarked door, which might have led to the street, or nowhere. 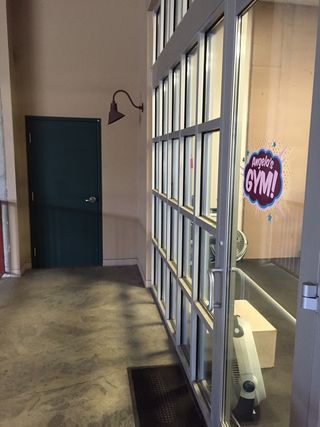 It turned out it the door led to a stairwell.  And two flights up, one landed safely in a pedestrian walkway. 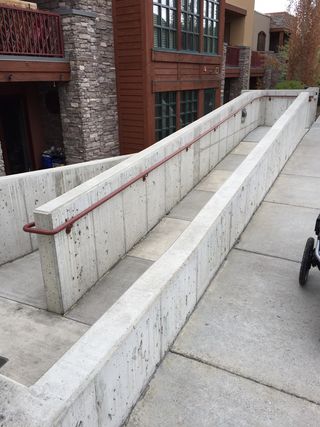 Unfortunately, though, there was absolutely no signage on this side either that would indicate that this passage was a public space that could help pedestrians navigate a stretch without sidewalks.

I tip my hat to the community for requiring this space because it does provide a much needed access point for pedestrians; however, like many POPOs, there is inadequate signage to make it of value to most people, especially those that do not know the area well.  As is the case in many places, what is needed to make POPOs really work is a community that makes sure the space is actively used and information about the space is widely distributed.  That is what the house notes provided to us.

Communities need to ensure that these POPOs, which are typically conditions of approval, can actually be used by checking up on things like signage over time, and also making such adequate signage a part of the condition of approval.  POPOs can serve great public functions, but the public needs to know the space is there or it won't serve the purpose.

Great post Stephen. This joins the long list of POPOs that are essentially still private spaces, such as rooftop parks, public parks in gated communities, and walkways through all sorts of private property.