Space and the City - Special edition of The Economist

Yesterday, I blogged about an article in the April 4, 2015 edition of The Economist.  The whole edition, entited "Space and the city:  The high cost of wasting land," is chock-ful of wonderfully researched discussions of land use issues.  In particular, I'd recommend the lead article, "Space and the city."  Since The Economist is behind a pay-wall, I am listing the abstracts of several articles I enjoyed below.  It might be easiest, though, to just buy it on your iPad. 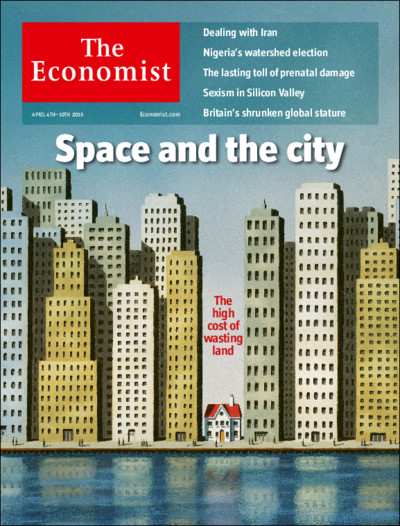 Space and the city; Urban land

(Apr 4, 2015): 11.
Land is not really scarce. What drives prices skyward is a collision between rampant demand and limited supply in the great metropolises like London, Mumbai and New York. In the past ten years real prices in Hong Kong have risen by 150%. Residential property in Mayfair, in central London, can go for as much as L55,000 ($82,000) per square metre. A square mile of Manhattan residential property costs $16.5 billion. Even in these great cities the scarcity is artificial. Regulatory limits on the height and density of buildings constrain supply and inflate prices. The costs of this misfiring property market are huge, mainly because of their effects on individuals. High housing prices force workers towards cheaper but less productive places. Lifting all the barriers to urban growth in America could raise the country's GDP by between 6.5% and 13.5%, or by about $1 trillion-2 trillion. Two long-run trends have led to this fractured market. One is the revival of the city as the central cog in the global economic machine. Another trend is the proliferation of green belts and rules on zoning. Zoning codes were conceived as a way to balance the social good of a growing, productive city and the private costs that growth sometimes imposes. But land-use rules have evolved into something more pernicious: a mechanism through which landowners are handed both unwarranted windfalls and the means to prevent others from exercising control over their property. Policymakers should focus on two things. First, they should ensure that city-planning decisions are made from the top down. Second, governments should impose higher taxes on the value of land.

Not so special; Special economic zones

(Apr 4, 2015): 14.
Now everyone seems to be an admirer of "special economic zones" (SEZs) that offer a combination of tax-and-tariff incentives, streamlined customs procedures and less regulation. Three out of every four countries have at least one. The world now counts about 4,300 SEZs, and more are being added all the time. Fans of SEZs can point to several success stories, none bigger than China's zone near Hong Kong, set up in 1980 and since dubbed "the Miracle of Shenzhen". The craze for SEZs suggests that governments too often see them as an easy win: make an announcement, set aside some land, offer tax breaks, and - hey presto! - deprived regions or struggling industries are healed. If only it were that easy. Popular as they are, SEZs are often flops.

The present past; The South

(Apr 4, 2015): 25-26.
For something that ended 150 years ago on April 9, America's civil war is strangely newsworthy. The war has created a divide that has yet to disappear. For all the economic dynamism of the South, which over the past few decades has almost caught up with the rest of the country economically, it remains a region apart, from the bedroom to the ballot box. If you know whether a state was part of the Confederacy, it is possible to make a reasonably accurate guess about where it stands on a range of seemingly unconnected matters, from party politics to gay marriage. Does race explain the persistence of difference? This may have been true in the 1960s and 1970s, when the Republicans energetically wooed southern white Democrats who were outraged by Lyndon Johnson's civil-rights laws. But it no longer fits. Religion is a better explanation of southern exceptionalism. The civil war divided most of America's Protestant sects, says Mark Noll of the University of Notre Dame.