"The Ancients Stole All Our Good Ideas"

Protecting the Environment Through Land Use Law: Standing Ground, starts with this quote from Emerson, “All of my best thoughts were stolen by the ancients.” The quote introduces Chapter One entitled The Long Arch of Local Environmental Law, which illustrates that law has been employed for centuries to balance land development and natural resource protection.  The chapter begins with this background:

“By one standard, 2013 was the 100th anniversary of the birth of comprehensive zoning in America: 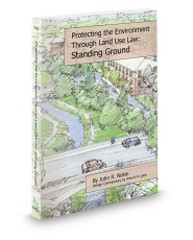 our principal method of controlling the private use of the land. In 1913, a commission was formed in New York City that later led to the adoption of the country’s first comprehensive, citywide zoning law in 1916. Before then, cities used their police power to protect the public health, safety, and welfare to pass laws prohibiting nuisance-like uses, such as horse stables and brick manufacturing, in developed neighborhoods. Zoning—a function of local government—became America’s method of determining the use of land: exactly what goes where on the landscape. The ideas behind public control of private land use and the law’s struggle to balance land development and natural resource conservation, however, are much older. Many of our contemporary strategies, such as green infrastructure, environmental impact review, open space preservation, and smart growth, for example, have been around for a long time.

Truly ancient antecedents stem from 450 BCE when a Roman commission adopted a land use law governing lot development, including the placement of hedges and pedestrian paths. This is possibly the oldest local environmental law whose objective, in today’s terms, was to insinuate green infrastructure into the local urban fabric. Under the 1572 Law of the Indies, King Philip II of Spain developed guidelines for city development that varied depending on climate, terrain, and the characteristics of the place. Latin American viceroys completed surveys, similar to today’s environmental impact statements. These surveys were sent to Spain, where planners developed the blueprints for many of Latin America’s great cities and regional centers, introducing parks, plazas, and open space into city design. Street widths, solar exposure, and connections between residences and the public realm were central to city planning: all topics that can be found in the credits and prerequisites of today’s Leadership in Energy & Environmental Design-Neighborhood Development (LEED-ND) rating system.”

Recognizing the considerable challenges we face as planners and lawyers, Chapter One ends with thoughts that provide a strategy and some hope for the future:

“The population expands, communities become more crowded, and development proposals cause greater rancor. Disputes erupt, change is needed, and a search for solutions ensues. Technologies emerge that were unknown a few short years ago. It is the law that needs to be changed; it is land use lawyers and planners who know its possibilities and limitations. Just as important, it is citizen leaders, educated in the workings and wiles of the local land use system, who can work to adjust the current legal system to accommodate and shape fast-paced trends.

These professionals and leaders are listened to when they suggest that local policymakers and stakeholders convene to consider appropriate change. It is the law of the community that requires adjustment for proper development patterns to emerge. People turn out for law reform meetings when they understand that their visions of the future and their embrace of new technologies can be memorialized and achieved by adjusting local land use plans and standards. In the end, it is this system that holds hope for achieving the balance between growth and development that has been the aspiration of land use planning from its inception.”

More about Standing Ground is available at  http://www.eli.org/eli-press-books/protecting-the-environment-through-land-use-law%3A-standing-ground.