This blog post follows-up a pair of August 5th and August 12th New Orleans posts.  Although I’m home in Atlanta getting ready to begin the new school year, I’m continuing an observance of Katrina’s 9th anniversary by ‘walking’ O.C. Haley Boulevard and looking at one of the city’s emerging post-storm neighborhood revitalization stories.

At the outset of this post, it is important to note that there are many more neighborhood stories that deserved to be told, ranging from stretches of St. Claude, Carrollton, and Claiborne Avenues to Freret and lower Magazine Streets.  There are also many neighborhood corridors still struggling to come back all over the city, but particularly neighborhoods lying generally east and a little north of the French Quarter, including the vast area of New Orleans East as well as the Upper Ninth Ward and the Lower Ninth Ward.

As the son of an architect, I’m always ready to begin discussion of any neighborhood transformation by flashing slides of the ‘bricks and mortar’ improvements.  Those are also the improvements that we as lawyers are most directly involved in supporting: the land acquisitions, the tax credit financings, the bridge loans, the condo documents, the parking easements.  But to get any neighborhood to the point where it can provide the social and economic buttressing to support significant private market transactions, there’s often a foundation of community activism and advocacy.  O.C. Haley Boulevard is no exception.

Very rarely is any one individual or organization the sole ‘mover’ behind a neighborhood’s re-emergence.  Long before the levees and flood walls breached, non-profit, business owner, and neighborhood advocacy groups were working to lay the groundwork for O.C. Haley Boulevard’s resurgence.  Carol Bebelle, co-founder of the Ashé Cultural Arts Center, moved the Center onto the Boulevard in 1998 in order to sustain and nurture  the stories and traditions of New Orleans’ African American community.  The Cultural Arts Center’s historic building, an adaptive use of a former department store, became a foothold for the Boulevard’s resurgence, supporting non-profit office space, exhibit and meeting space, and 29 apartments.

About the same time, O.C. Haley Boulevard Merchants and Business Association gathered local businesses to spearhead creation of a strategic plan for the Boulevard’s revitalization.

A couple of years later, in 2000, Café Reconcile opened across the street as an adaptive use of another large historic commercial building, housing a full-service restaurant dedicated to providing culinary training and life skills development to young men and women from the surrounding neighborhoods.

Along the way, the Boulevard attracted key regional community development partners, and led them to call the Boulevard ‘home.’  These partners included Hope Federal Credit Union (http://www.hopecu.org/) and Good Work Network (http://www.goodworknetwork.org/), both of which concentrate their resources on serving low and moderate income families and developing opportunities for minority and women-owned businesses.

In short, the Boulevard’s momentum had already been triggered when Katrina’s storm surge filled-up 80 percent of city, leaving the Boulevard and only a handful of other major corridors navigable by car as opposed to boat.  (A relatively current map of the businesses that have grown-up on the Boulevard in the last fifteen years is found on the Merchants and Business Association’s website, http://ochaleyblvd.org/?page_id=5).

Lawyers – often community development lawyers – figure critically in these first stages of a neighborhood’s redevelopment, well before building projects begin ‘going vertical.’  Lawyers are counseling neighborhood groups and businesses on drafting their articles of incorporation and their bylaws or preparing their Form 1029 to seek IRS 501(c)(3) status.  They are helping review applications seeking funding from foundations for planning and predevelopment award monies.  They may be advising their clients to seek funds for a market study to help give current and future businesses a sense of where and how they might invest their capital and other resources.  Or, they may be advocating at city hall for stricter enforcement of health and safety code violations affecting vacant or abandoned properties.  Law students interested in pursuing urban and community development work should gain an appreciation in law school of these critical supporting and counseling roles that lawyers play for community groups.

Earlier this month, I visited with Kathy Laborde, President and CEO of the non-profit Gulf Coast Housing Partnership (GCHP).  Laborde, who has worked on the Boulevard for almost two decades, described the factors that convinced her and the neighborhood’s stakeholders that they could turn around the Boulevard’s fortunes.  GCHP has been a main driver of redevelopment on and around the corridor since Katrina.  In sharing her thoughts and recollections concerning the Boulevard’s rebirth, Laborde described not only the last nine years’ key redevelopment projects, but at the same time she highlighted additional pieces of the urban redevelopment ‘puzzle’ that successful urban and community development lawyers need to appreciate to serve their clients well. 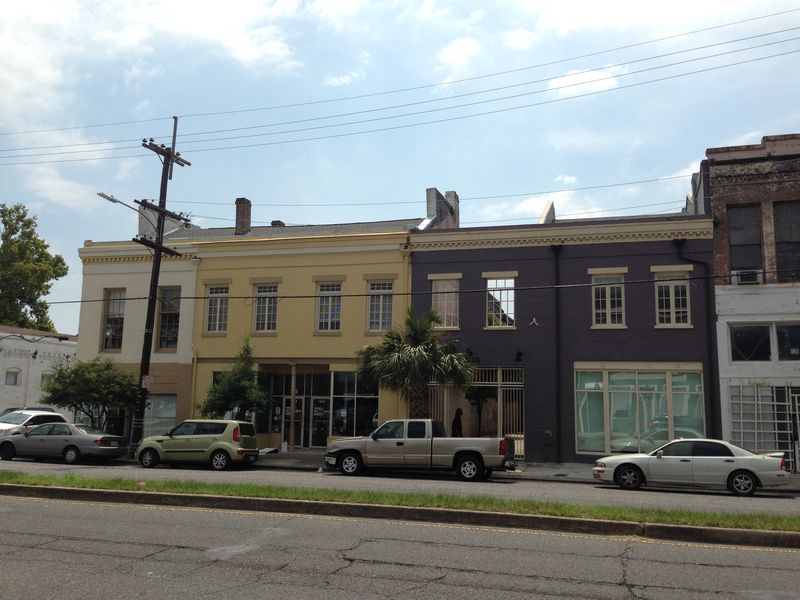 Location is an essential consideration for any urban redevelopment project.  Against the essential backdrop of an engaged group of neighborhood stakeholders, Laborde outlined the following factors as critical:

Katrina fundamentally altered the way those inside and outside New Orleans viewed the city.  To those living in New Orleans, the telltale watermark stains left by the epic flooding clearly distinguished O.C. Haley Boulevard as ‘high ground’ that did not flood.  To those outside New Orleans, particularly local and national foundations and philanthropies, O.C. Haley Boulevard bordered one of the city’s toughest neighborhoods with one of its deepest pockets of poverty.  Outsiders also appreciated that the Boulevard was surrounded by areas of significant strength, including the city’s wealthier Uptown neighborhoods, the Central Business District, St. Charles Avenue, and the former C.J. Peete (Magnolia) development which was a 1930s-era public housing development then-slated to receive millions of dollars in HUD funds for complete redevelopment into the new mixed-income Harmony Oaks community.

Outside funders immediately saw the Boulevard in a new way.  It stood out not only as a neighborhood where the private foundations and philanthropic funders saw they could achieve programmatic goals of creating more equitable, inclusive, and prosperous inner-city neighborhoods, but also these private funders were buoyed by the fact that high levels of investment were occurring all around the Boulevard.  Further, just as foundations and philanthropies were looking to leverage their investments, so too was the New Orleans Redevelopment Authority (NORA), which was responsible for making decisions about deployment of a tranche of federal disaster block grant monies for commercial corridor investments.  It was a ‘no brainer’ for NORA to join the catalytic investments of the Greater New Orleans Foundation, Kellogg, Rockefeller, Ford, Surdna, and the J.P. Morgan Chase Foundations.

Make no mistake – even with this level of interest, the Boulevard was hardly awash in cash.  In a post-Lehman Brothers world, banks had a low temperature for risk, and in post-Katrina New Orleans where the levee and flood control system rebuilding was not yet complete, caution was the rule for commercial lenders.  But what the philanthropic and government funding accomplished was to make the development ‘math’ work for deals dependent on tax credits and tax exempt bonds.  A non-profit developer could run a development pro forma that now yielded at least a sliver of a development fee.  The challenge for those developers and their clients was to complete successful residential and commercial development projects that would help New Orleanians and visitors alike see O.C. Haley Boulevard as a safe place to live and work.  As Laborde explains, this was the “show me stage” of the corridor’s redevelopment.  Beginning in 2007, this is exactly what the Boulevard’s stakeholders began to do.

Over the last seven years, GCHP and the Boulevard’s other stakeholders have completed a steady stream of housing, restaurant, office and retail projects.  The first pivotal project was GCHP’s completion of The Muses, a 263-unit mixed-income apartment community, which opened in 2009.  This project brought hundreds of new residents to the Boulevard and helped bridge the three-block real estate market 'canyon' between St. Charles Avenue and the Boulevard. 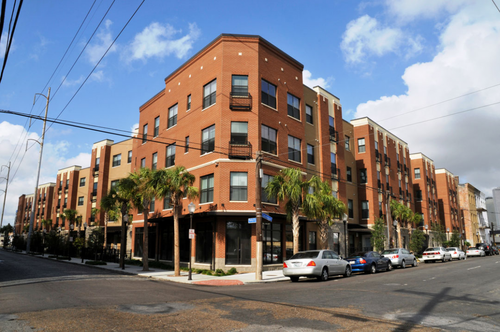 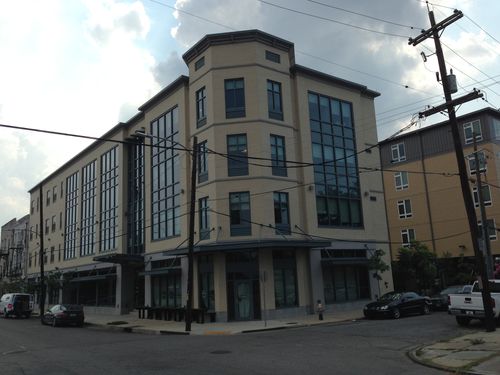 Another important project was Café Reconcile’s expansion and rehabilitation of its existing restaurant and training space. 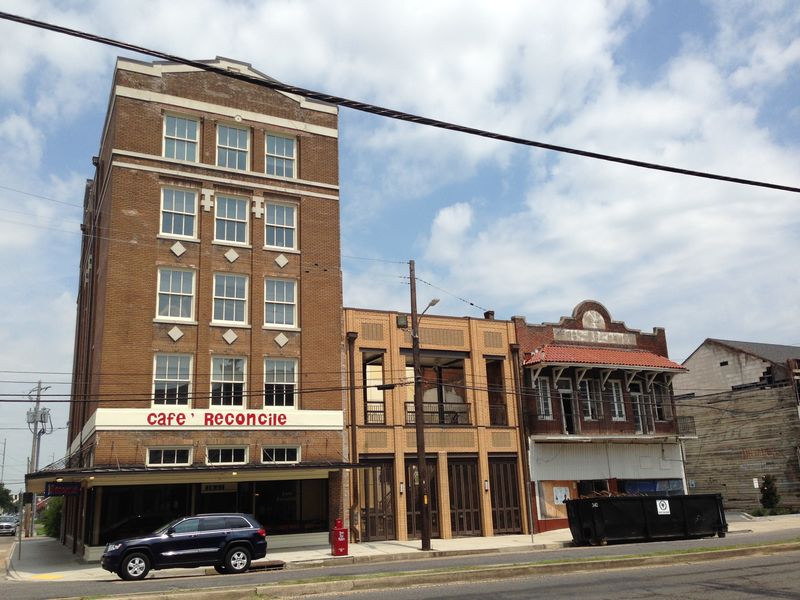 “Success in community development,” Laborde stresses, “is about getting people to follow.”  And they are doing so on the Boulevard.  More projects are just weeks and months from completion, including the adaptive use of an historic school as a grocery store and offices, the renovation of two large retail buildings into the Southern Food and Beverage Museum (SoFAB), including The Museum of the American Cocktail, as well as the first home of the New Orleans Jazz Orchestra (NOJO), including its 360-seat performance venue.  The projects soon coming on-line include: 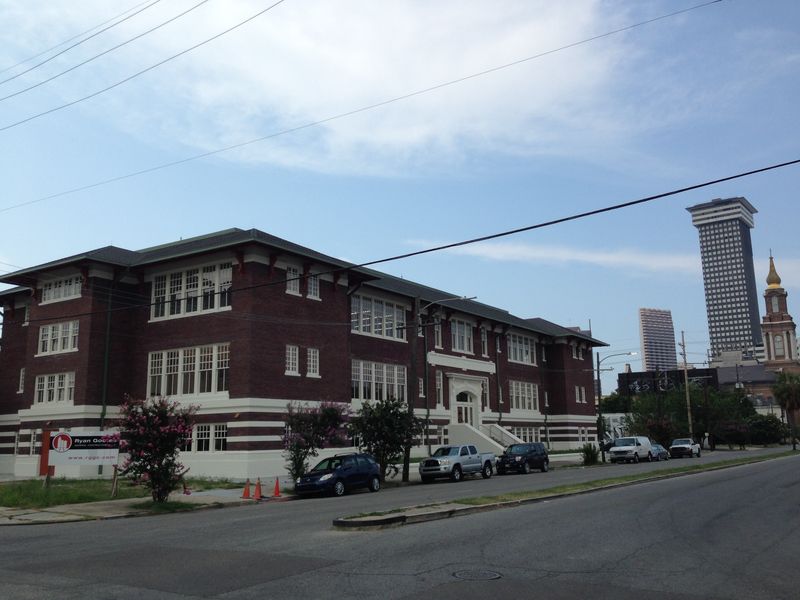 (Photo: the former Myrtle Banks School at 1307 O.C. Haley Blvd., which is being redeveloped by Jonathan Leit of Alembic Community Development.) 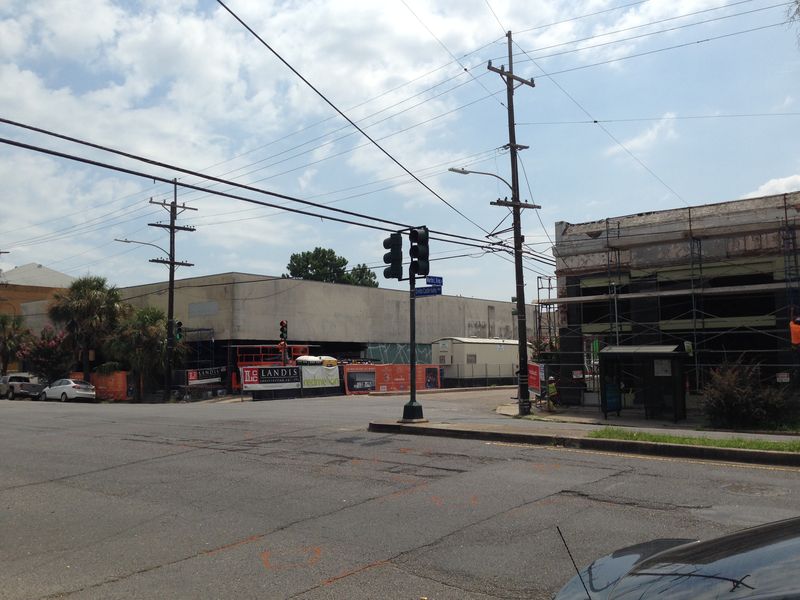 Next week we will wrap-up our discussion of O.C. Haley and Katrina’s 9th anniversary with a discussion of what urban redevelopment professionals are looking for in the attorneys they hire.