This is the second in a series of posts from New Orleans. The first appeared last Monday, August 4th. As I promised in that first piece, today we’re just beginning to take a walk down one of New Orleans’ historic commercial corridors, Oretha Castle Haley Boulevard (O.C. Haley Blvd.), which is named after a leading local civil rights activist. Today’s post looks at the fortuitous intersection between post-Katrina federally-funded long-term recovery programs and the extensive pre-storm efforts of O.C. Haley Boulevard activists and stakeholders to reclaim this historic corridor. 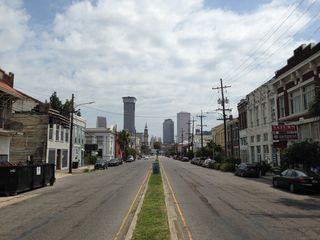 In the decades leading up to the 1960s, O.C. Haley Boulevard (formerly known as Dryades Street) was one of the principal shopping destinations for black families and also a pre-Civil Rights Era hub for the City’s best black musicians. During the 50 years since the mid-1960s, O.C. Haley withered a little more each passing year. First, the corridor lost in increasing numbers its shoppers; then its businesses began to close; and then families in surrounding blocks began to move away. Finally, in the years leading up to Hurricane Katrina, the Boulevard started losing its architecturally distinguished commercial structures – one by one. 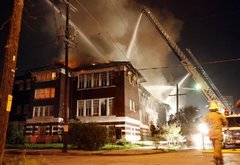 Photo (2008):  Fire destroys the interior of another of the Boulevard's important historic structures, the circa 1902 Myrtle Banks School.

Earlier this spring, in his CityLab article, The Overwhelming Persistence of Neighborhood Poverty, Richard Florida tacitly suggests that O.C. Haley’s fate has been the fate of our oldest urban neighborhoods all across the country.  Florida’s article, citing a May 2014 study by Joseph Cortright and Dillon Mahmoudi, disclosed a number of fascinating tidbits about cities, but the statistic that really jumped out is this one: since 1970 “for every single gentrified [urban] neighborhood, 12 once-stable neighborhoods have slipped into concentrated disadvantage.”

That statistic about declining inner city neighborhoods stopped me in my tracks. As long as I can remember, I’ve been fascinated by two things: old inner city neighborhoods (my dad is a preservation architect) and the Red Sox (born and raised in Boston). This is to say that I'm easily captivated by box score style statistics, such as the one Florida cites.  I'm also no stranger to extended periods of adversity for the teams I love. But I clearly did not have an accurate idea of the extent to which so many inner city neighborhoods had faced such long odds for so long a period of time.

The statistic Florida cites concerning the decline of inner city neighborhoods got me to thinking about what I taught my land use students last semester. If our land use, local government, real estate finance, and community and economic development clinic students aim to work in cities, Richard Florida is telling us that they have their work cut out for them. The data suggests there are many hundreds of O.C. Haley-like Boulevards across the country.

Of course the problem of distressed inner city communities is not new. As we all know, lawyers have for years played critical roles in representing community groups, developers, banks, philanthropic funders, and local government clients on every side of urban revitalization deals. But Florida’s article reminded me how large the challenge of neighborhood revitalization looms for cities. There’s a lot of ground to cover in a basic land use class, but I found myself asking what my students and I learned this past semester that would help them do this work better or smarter. The short answer is that we squeezed in as much time as we could to study the redevelopment ‘tool box’ a city and its neighborhood organizations can use to stabilize and revitalize neighborhoods: land trusts, land banks, eminent domain, code lien enforcement, tax credits, etc. But thinking about Florida’s article reminded me that this approach is missing a key element. After all, most of these stabilization and revitalization tools were available to young lawyers and planners and community groups for the better part of the 45-year period that Florida observes the rapid evaporation of inner-city neighborhood vitality.

In thinking about the statistics Florida discusses and about the long decline of O.C. Haley Boulevard, it struck me that the conversation that I didn’t have this spring with the land use students is about the nature of urban revitalization work. It is often a slog. Some describe the work as being as slow and painfully incremental as ‘trench warfare.’ I prefer how some describe it as caring for a patient recovering from a debilitating life-threatening injury. That is, urban revitalization work concerns much more than strategic deployment of those redevelopment “tools.” It goes far beyond helping your client close on tax credit financing for a major catalytic redevelopment project. Rather, it also depends on the patient persistence of a diverse team of ‘caregivers’ over a long period of time. Some of those ‘caregivers’ are internal to the community. They are the local merchants associations and neighborhood advocacy groups. They are also the local community development corporations, code enforcement staff, city councilpersons, assistant city attorneys, philanthropic foundation program officers, and the law school clinics with neighborhood organization clients.  Neighborhood revitalization ordinarily requires keeping at least part of these diverse teams together for years – often more than a decade. In other words, it is worth discussing with our students that while they need to know the law and understand the nuances of the ‘tools’, the work of revitalizing a neighborhood is not usually just a transactional matter, but it is much more an organic process.

Kathy Laborde, is President and CEO of Gulf Coast Housing Partnership, one of Louisiana’s leading developers of commercial and residential projects serving low and moderate income communities. Beginning in the late 1990s as a community development banker, Laborde has worked with representatives of the O.C. Haley Boulevard neighborhood on redevelopment projects. Prior to Hurricane Katrina she also moved her development firm’s offices onto the Boulevard. Like the neighborhood merchants association and local community groups, Laborde knew O.C. Haley Boulevard had enormous potential to rebound – even as most New Orleanians ignored the corridor and consciously avoided it for fear of encountering the  crime for which the Boulevard had become known. Together with a strong and cohesive band of neighborhood advocates, she has long been a steadfast proponent of revitalizing the Boulevard. In a meeting in her office earlier this month, I asked her why, in the late 1990s, she and neighborhood leaders believed that they could turn around the Boulevard’s fortunes.

In the next blog post, we look at snapshots of the Boulevard's challenging 15 year journey through and beyond Hurricane Katrina to an active neighborhood renaissance that continues to catch the attention of both the city's visitors and long-time residents.