Notes on getting by in a small western town: A visit to Dubois, Idaho

In late April, my Economic Development Clinic traveled to Dubois, Idaho, a town of just 700 in 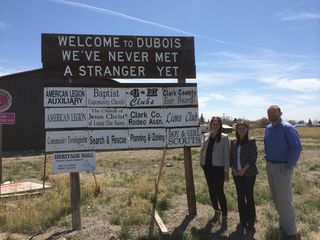 eastern Idaho located in a county with just a few hundred more people in its census counts.  We were there to work on a project that I will discuss in greater detail in another post; however, I was taken with several aspects of the town, it's "never say die" attitude, and the unexpected vitality still there in a place that would otherwise be easy to miss.  Some of what we learned seemed to speak volumes about the future of small towns in America generally, and so I thought I'd share some of these facts, as they were told to me, which may prove of interest to those interested in the life and death of small towns.

The main street of Dubois has few businesses.  The town's heyday was almost a hundred years ago when the railroad had a turn-around here.  When the railroad left, the town withered.  But there are other, structural reasons to the town's hard times.  An hour's highway drive from Dubois is the largest city in eastern Idaho, which is called Idaho Falls.  An economic impact study found that $7 million a year leaves Dubois for Idaho Falls as almost everyone shops at the Wal-Marts, Targets, and Costcos that have sprung up in that larger city.  The loss of that revenue--and the tax based on that retail--impoverishes the local government to the benefit of Idaho Falls.  Of course, as in most places, Idaho Falls has no responsibility to share the taxes it generates from Dubois' citizens.

While Dubois suffers at the hands of its municipal neighbor, there are pockets of industry here that are suprising.  The railroad still runs through this town and, several years ago, a hay farmer convinced the railroad to put in a new spur.  He now loads hay on cars parked on that spur, then ships the hay to China, where he has a buyer that pays twice the price he can get in Idaho.

Another farmer has given up potato farming, which he was losing money on, in favor of the newly-hip grain barley.  Potatoes and barley generate about the same revenue but the barley costs much less to produce and thus produces a profit.

The folks on this high desert plain have also banded together in ways you might not expect in a place where libertarianism rules the political roost.  Several years ago, the community became fed up with the price of propane, which was over $4 per gallon.  The community started a propane cooperative and, last winter, prices from the cooperative never rose above $3 per gallon and were as low as $2.37 a gallon.  Across the mountain in Montana, prices still top $4 per gallon.

In a small town, you never know what business will come your way.  For Dubois, new business has several forms.  The first is rodeo.  It turns out there is a sizable Canadian rodeo market and many of the riders in Canadian rodeo come down I-15 on their way to American rodeos in Nevada and California.  They have a hard time finding a place to stop where they can keep their horses.  And so, the owner of the local gas station and convenience store is planning to convert a down-on-its-luck apartment complex into an extended stay hotel with one much-sought after amenity:  a big dirt lot where horses are welcome.

The second unexpected industry to come Dubois' way is climate change energy rules in Europe.  On the far end of town, a wood pellets factory is about to set up shop in a new energy park the State has established.  The investor is a European firm that plans to manufacture the wood pellets in Dubois, then ship them on a rail line to a ship that will transport the wood pellets to Europe where they will be burned instead of coal as part of European efforts to reduce greenhouse gas emissions.

And then there is the future.  The State wants to shut down the school because of low enrollment.  If they do, that would mean students would have to be bussed to a town almost an hour away.  Some with kids might stay, but most would probably leave for a larger town.

Dubois struggles, but it holds on and, in some unexpected ways, prospers.  The future of life in most small western towns--opportunities, spirit, and problems--are mostly permutations of what Dubois faces now.  It is seldom, though, to get such a close look at a place like Dubois, and I am thankful to all the great folks who invited us into their community and showed us around.

Listed below are links to weblogs that reference Notes on getting by in a small western town: A visit to Dubois, Idaho: