Resilient Cities: A Conversation with Tony Arnold and Barbara Cosens 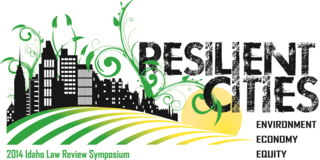 approaching.  It will be held this Friday, April 4, 2014, in Boise, Idaho and also live-broadcast for free on the Internet.  The full schedule is here and also reproduced below.

This year, we also decided to try something a little hi-tech for a bunch of law profs.  I convinced Tony Arnold (Louisville) and Barbara Cosens (Idaho) to have a chat with me about resilient cities; however, I was in Boise, Barb was in Moscow, Idaho, and Tony was in Louisville, Kentucky.  In addition, two radio hosts from Boise's Building a Greener Idaho also joined us.  Together, we created an hour's discussion broadcast as a Google Hangout, captured on You Tube below, and which will be edited for a radio show to air here in Boise the next few weeks.

I'm not going to say it all went according to plan--we had some glitches with audio and video at times--but overall, the experience proved to me that this format can be a valuable way to bring together law profs--and disseminate ideas from the academy--in a cost-effective and potentially powerful manner.

I owe many thanks to Tony and Barb for agreeing to give this a try the first time around.  I'm hoping that, should all go according to plan, there will be future hangouts integrating discussions of land use profs into this blog in the near future.

Here is the schedule for the Resilient Cities symposium on April 4, 2014 in Boise and also streamed live on the Internet (all times Mountain):

Listed below are links to weblogs that reference Resilient Cities: A Conversation with Tony Arnold and Barbara Cosens: