A response from Bill Fischel on school district consolidation, and a query on why special districts continue to fascinate scholars

I was delighted over the weekend to see a response from Bill Fischel (Dartmouth) on my blog post series about local government units.  Bill is undoubtedly well known to many readers of this blog for his work on land use and local government, such as The Homevoter Hypothesis.  Because I find our blog software tends to hide comments, I thought I’d re-post Bill’s comment in italics and then respond.  Here is Bill’s comment on my earlier post:

Stephen, as I show in my 2009 book, Making the Grade, almost all of the decline in school district numbers comes from consolidation of rural, mostly one-room schools, into larger districts. The one-room school statistically disappeared in 1972, and the number of school districts has held steady since then, with very little change in the number of urban and suburban districts. In terms of the districts that serve most of the population, their borders have been remarkably stable for about 70 years.

Special districts are another matter. They have increased, but I remain puzzled as to why they occupy scholars' attention as much as they do. Almost all of them do only one thing, have no general police powers, and tax only those they serve, mostly in proportion to benefits. The major exceptions are western water districts, whose main curiosity is their Court-permitted deviation from popular voting standards.
Bill

Unbeknownst to Bill, I had meant to mention his book, Making the Grade, in a post some time this week because that work had been recommended to me in conversations I had with folks at the U.S. Census, Joseph Dalaker and Liz Accetta, on this subject.  Joe and Liz also pointed me to this excellent presentation Bill did on Making the Grade, which I just watched and would highly recommend:

It seemed that this series of posts has generated some interest, and so I decided to go back through the Census data and try to find a way to elegantly portray the data underlying what Bill talks about in his comment.  To that end, I have excerpted Census tables on special districts and school districts from the data source I provided earlier.  Folks who review the data tables at the end of this post (click on tables to enlarge) will find Bill’s assertions above well supported.

That leaves the question Bill has identified in the second part of his comment:  why are scholars so obsessed with special districts? Moreover, are scholars rightfully obsessed with them?  I have several ideas on the subject I will post later in the week.  In the meantime, I thought I’d see if Bill’s comment, and the addition of this data to the discussion, will engender comments before I take my crack at it.

And thanks, Bill, for taking the time to write! 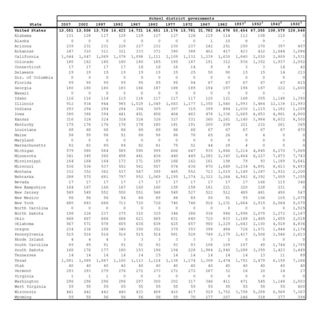 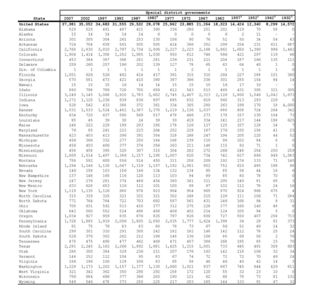 Listed below are links to weblogs that reference A response from Bill Fischel on school district consolidation, and a query on why special districts continue to fascinate scholars:

Also, spurred partly by your original posting on the subject and my own research, I've started an entire series on local government fragmentation on my research blog (http://cgoodman.com/2013/05/20/local-governments-in-the-united-states-2012-edition/). I think it helps to visualize these data.