Could it be that American local governments are actually more centralized than they were a generation ago?

When I teach State & Local Government Law, one of the narratives of the course is jurisdictional 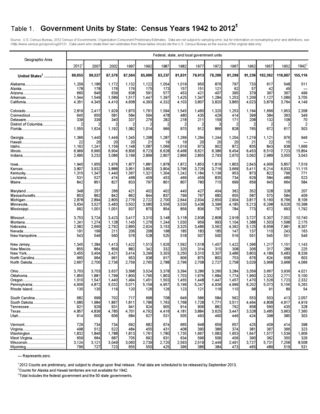 I find these numbers staggering, and I don’t know what to make of them.  My presumption is that a lot of the lost local government units were hyper-specialized special use districts of one type or another; for instance, maybe there were five mosquito abatement districts in some rural western county, but now there is just one mega-mosquito abatement district.  But I wonder, what was a state like Minnesota doing with 10,398 local government units in 1942 where it has just 3,634 local government units in 2012?  I plan to dig into this over the next couple months but, in the meantime, I thought I’d crowdsource it and see if anyone out there has a thought as to what this is all about.  And, moreover, does it mean that I need to revise the narrative I tell about fragmentation of American local governments?  Is the trend, in fact, toward more centralized power of local governmental units?

Listed below are links to weblogs that reference Could it be that American local governments are actually more centralized than they were a generation ago?:

do we have numbers from before 1942? I think the new deal resulted in a flurry of local govt corps.

also, it would be interesting to see what kind of power many of these local governments from 1942 had compared to some newer entities that have power to appropriate enormous amounts of tax dollars collected by a city or state rather than forced to earn a meager assessment through a special election.

More powerful local government corps that manage to siphon away real power and dollars away from cities and states may actually result in decentralization of local authority even if there are less entities doing the decentralizing.