Boudreaux on The Housing Bias 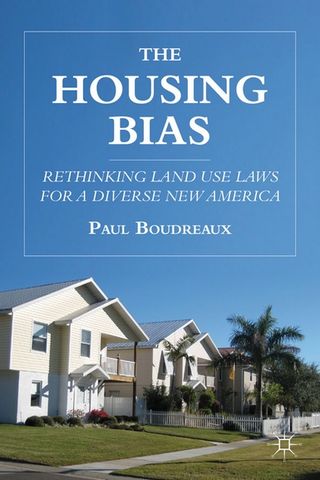 Paul Boudreaux (Stetson)--the original Founding Editor of the Land Use Prof Blog-- has published a book that addresses one of the most critical issues in American land use in the 21st century: The Housing Bias--Rethinking Land Use Laws for a Diverse New America (Palgrave MacMillan, 2011).  Here's the SSRN abstract:

As more than 300 million Americans squeeze into our country, and as single-person households now outnumber families of parents and children, it's time to rethink our land use laws that favor the single-family house. Our zoning laws were created in an age that assumed that nearly everyone outside of central cities preferred to live a house separated from neighbors; this assumption is no longer valid and no longer sustainable for a crowded nation. The Housing Bias explores the legal discrimination against apartment buildings and other forms of low-cost residences and how these laws make housing more expensive for modest-income Americans – a key factor in the development of subprime loans and other risky practices that eventually sparked our current economic crisis. Why do our laws prohibit the construction of low-cost housing? It is largely because existing homeowners prefer to exclude them – an astonishing example of law’s granting a legal privilege to wealthier citizens, a privilege that our nation can no longer afford.

This provocative book explores real-world 21st-century controversies of the housing bias. It visits the recent effort of Virginia suburbs to enforce “overcrowding” laws against mostly Latino families who migrated to the area to build new subdivisions, and then moves to New York, where eminent domain is used through a dubious interpretation of law to seize condominiums of middle-class families to build a new pro basketball arena. The book reports on the story of how laws requiring large house lots prevented the construction of a mobile-home community in a growing rural county in southern Michigan, and then examines the failed effort to legalize the widespread phenomenon of small “granny flats” in the backyards of the middle-class homes in the packed city of Los Angeles.

The Housing Bias concludes by exploring how we could update our laws to accommodate the housing needs of a diverse new America, in which half of all households now consist of only one or two persons. The prescriptions range from the complex, such as using state laws to override the power of local homeowners to zone out low-cost housing in certain zones, to the simple, such as facilitating the construction of apartments above suburban malls. It is useful for libraries and for college courses on society or law or for any intelligent reader. Written in an entertaining and jargon-free style, The Housing Bias is essential reading for understanding the flaws and the future of the American community.

One of the great things about land use is that it is fundamentally about places and their stories, and in this book Paul uses these examples to make a larger point about a critical issue of law and policy.  The Housing Bias is definitely worth reading and thinking about.

Listed below are links to weblogs that reference Boudreaux on The Housing Bias: