The Greatest Grid: New Exhibit at the Museum of the City of New York

While visiting New York City recently for the Association of American Geographers' annual meeting, I took in a great exhibit at the Museum of the City of New York entitled The Greatest Grid: The Master Plan of Manhattan 1811-2011.  The exhibit coincides with the 200th anniversary of the adoption of the famous street grid for the island of Manhattan.  It is a fascinating exploration of one of the most significant urban planning endeavors in American history.  You can see an overview of the exhibit here, and the New York Times Review of the exhibit here.  My thoughts on the exhibit, with pictures, are below:

The major goal of the grid system was to enable the construction of cheap housing in a growing city.  In 1811, most of the settlement in Manhattan was limited to the island's southern tip.  North of that the land was broken up into large, irregularly shaped estates, such as this one: 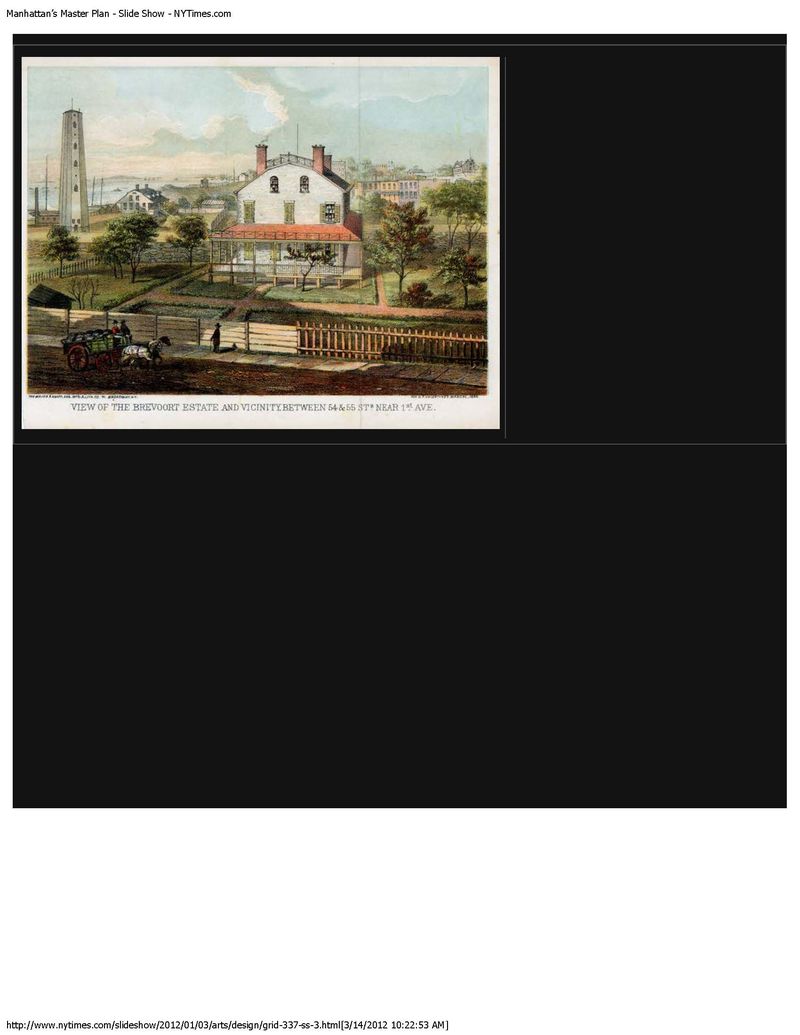 The plan's architects believed that breaking up large parcels of land into smaller, more regularized and accessible parcels would encourage the development of smaller, mass-produced, and, hence, cheaper, housing.

Judged on these terms, the plan worked brilliantly.  The exhibit illustrates this with a fascinating discussion of the estate of Clement Clarke Moore, known as the author of “Twas the Night before Christmas."  Mr. Moore was the owner of a very large estate on Manhattan's west side called Chelsea (now a fashionable neighborhood of the same name).  Moore initially opposed the division of his estate into small rectangular parcels, but he eventually accepted the inevitability of the grid and began subdividing and selling off small lots for housing, just as the authors of the grid plan anticipated.  Moore's subdivision map for Chelea is below, and property nerds will note that Moore included restrictive covenants on all the lots, as indicated by the barely-readable text on the lower right-hand side prohibiting "nuisances of any kind" and the like: 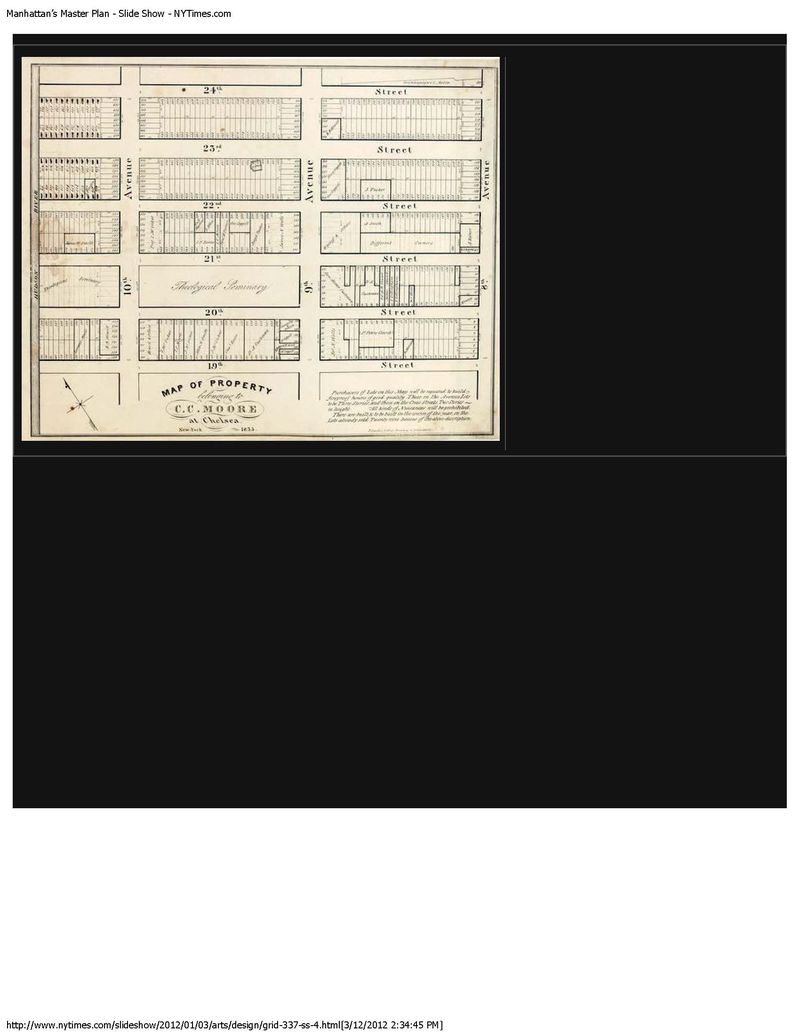 As this map shows, the grid system encouraged (although it did not mandate) lots about 100 feet deep (1/2 block in length) and 20 feet wide for a regular dwelling.  This way every unit would have access to sunlight from one side.  Larger facilities would have wider lots at the same depth, and seminaries occupied an entire block.  Similarly, the grid encourages a pattern in which buildings within a block are connected to each other to create a uniform street wall with a single vista leading out to the horizon.

In this way, although the grid was not aimed at affecting design, it had a powerful aesthetic impact, effectively encouraging a uniformity of design much as the later 1916 zoning resolution did.

Although the grid system provided a windfall for landowners like Moore, many landowners were very hostile to the grid scheme, seeing it as part of a land grab.  The surveyors who came north to lay down markers for future intersections were often met with jeers or worse, and landowners were known to sabotage the markers.  Eventually, the city began to use huge, heavy markers that were imbedded deeply into the ground so they could not easily be uprooted by angry landowners.

It's not hard to see why many landowners opposed the grid system.  Manhattan was very hilly terrain, but the roads were laid out at a low, flat grade.  As a result, many homes, especially those located at new intersections, were left lurching on a precipice, as here: 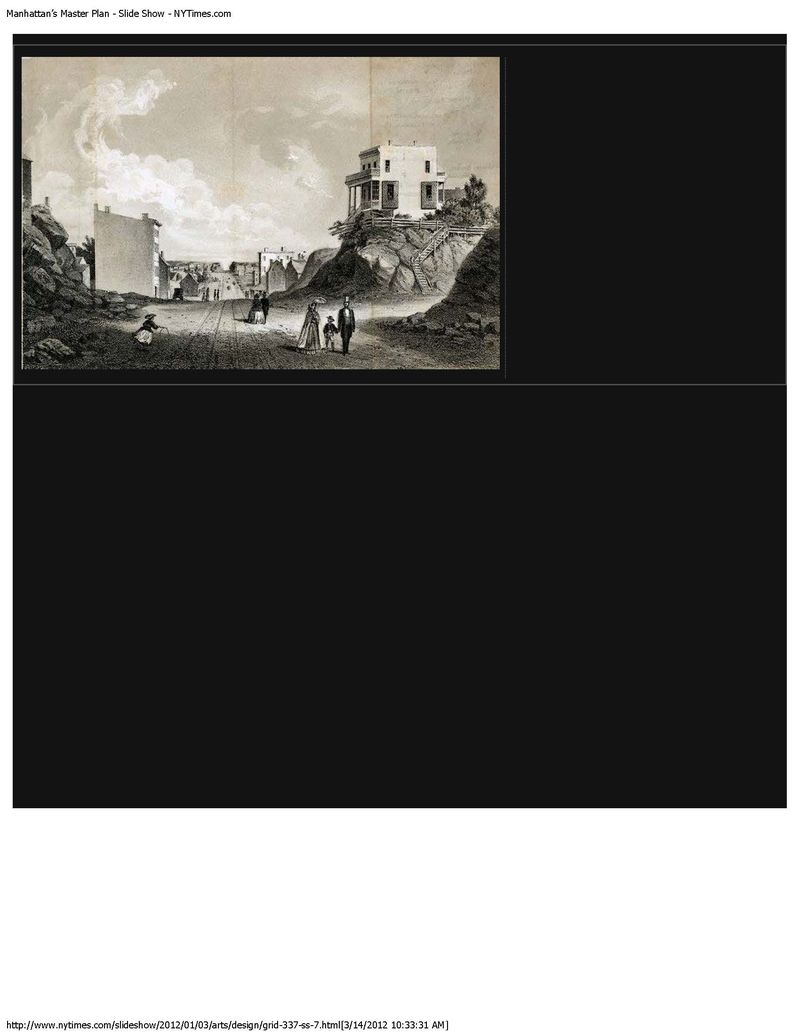 As you can see, although Manhattanites and the rest of us have accepted the grid as a matter of course, perhaps as an inevitable product of modernity, it was a massive disruption of daily life (and property rights) at the time and required some pretty heavy-handed government intervention to accomplish.  I'll have more thoughts on the exhibit later.

Listed below are links to weblogs that reference The Greatest Grid: New Exhibit at the Museum of the City of New York: