Property Prof Blogger extraordinaire and official Land Use Prof Blog Buddy Steve Clowney draws attention to an interesting recent column from NY Times architecture critic Michael Kimmelman about NYU's plans to expand within Greenwhich Village.  I agree with Steve's assessment that the column focuses too much attention on the effect the expansion would have on a little used plot of park space.  It is curious that Kimmelman opens the column describing NYU's expansion plans as "acrimonious" but then immediately pivots away from describing any of the actual acrimony to an issue that only he seems to care about, to wit, this "underrated" park that nobody know exists.

Kimmelman's main argument appears to be that NYU itself is responsible for the park space in question falling into disuse, and so the city should leverage its zoning power to force NYU to make the park more accessible.  At this point, I was running for my land use casebook to consult the Supreme Court's exactions jurisprudence (For land use newbies: governments are generally not allowed to leverage their zoning power for concessions absent an "essential nexus" between the concession sought and the land use approval requested).

In any event, I can't say Kimmelman is wrong as a policy matter.  He may be right that the village needs more open space and that NYU's plan is antithetical to that need.  To me, the most interesting part of Kimmelman's piece was his contention that the original Modernist "tower-in-the-park" design that spawned the endangered park space had actually done a good job of bringing much-needed open space to the village before NYU messed it all up.  This is at odds with the conventional wisdom that the tower-in-the-park idea was a monstrosity that necessarily brought about extremely alienating public spaces (wisdom made conventional, of course, by a previous crusader against Greenwhich Village construction plans, Jane Jacobs).  For an example of such an alienating space, check this out: 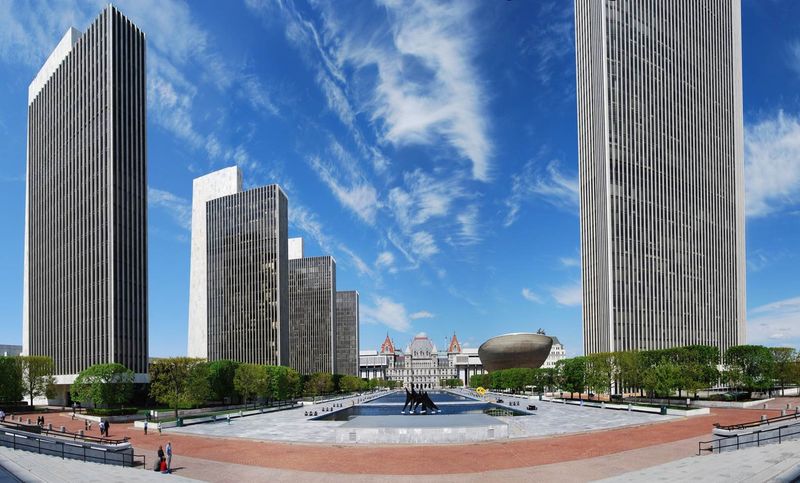 For those wondering, this is Empire State Plaza in Albany, New York, a gift of Modernist-loving governor Nelson Rockefeller.

I see an interesting parallel between Kimmelman's affection for Modernist park design in this column and his paean to the virtues of Modernist housing complexes in another column about which I blogged previously.  Kimmelman seems committed to resuscitating a form of urban design that has been largely relegated to the dustbin of bad planning ideas. For that, I commend him!

Listed below are links to weblogs that reference NYU's Controversial Expansion Plans: