An interesting local government story from the L.A. Times: East Los Angeles, an unincorporated and predominantly Latino neighborhood of 126,000 in Los Angeles county has had its latest petition to incorporate as a municipality denied by the Local Agency Formation Commission (LAFCO.)

Unlike many states, which simply permit any unincorporated area to incorporate if it can gather enough signatures for an incorporation petition, California actually requires all proposed municipal boundary changes to be approved by LAFCO, and one of the major factors LAFCO considers is the fiscal viability of the proposed municipality.  In this case, the LAFCO concluded that East L.A. lacks sufficient taxable resources to generate sufficient tax revenue to finance the municipal services (fire, police, etc.) that the new city would require.

East L.A.'s situation is interesting for many reasons.  For one thing, it highlights what Michelle Anderson has referred to as the problem of municipal "underbounding."  Take a look at the map of the Los Angeles basin below: 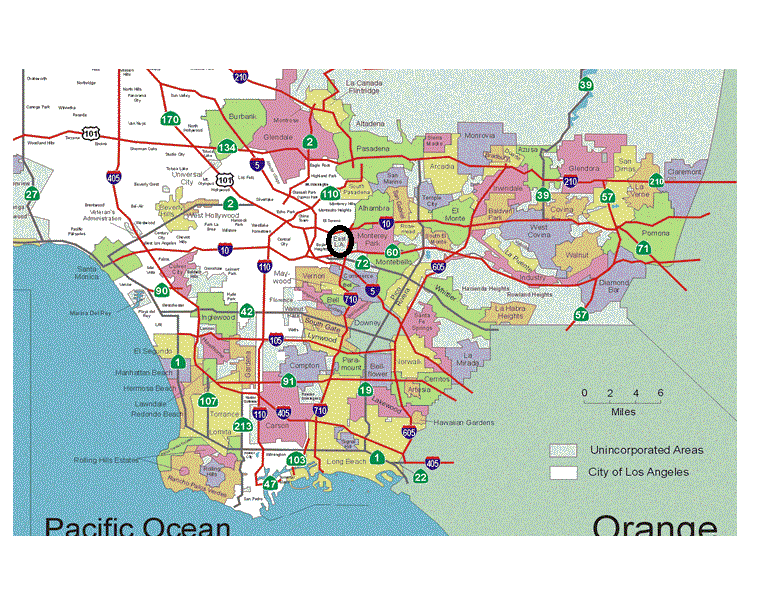 It's hard to read, but you can see that I have circled East LA in the center of the map.  The white portion of the map to the west and north of East LA are all encompassed within the city of Los Angeles.  The multi-colored territories to the East and South are other incorporated cities.  You can see that aside from a few small "islands" of unincorporated territory, most of the urbanized part of LA county lies within some incorporated municipality.  So what happened?

So why did East LA not incorporate?  Frankly, no one wanted to annex poor areas like East LA, so East LA had no reason to incorporate. And, even under the Lakewood plan, incorporated municipalities would still be required to finance their schools out of their own tax base, which is a very significant expenditure for a poor area.  The result is that East LA remained unincorporated.  So why incorporate now?  And why are they being prevented from doing so?

The second question is somewhat easier to answer.  After the rash of Lakewood plan incorporations, someone in California state government decided this system of willy-nilly incorporation was crazy, and the LAFCO was formed in order to create a more orderly process of dealing with municipal boundary changes.

Now the harder question: why would east LA want to incorporate in light of the crushing financial burden that would impose?  Remember, by remaining unincorporated, East LA receives services from LA county that are highly subsidized by residents of incorporated cities, who are still required to pay property taxes to the county in addition to the fees they pay for the contracted services.  Why forego this subsidy and have to pay your own way?  Incorporating would give East LA control of its own zoning, schools, and tax base, but with such a minimal tax base they would apparently be better off (and LAFCO certainly thought so) getting their subsidy from the county.

According to the website for the East LA cityhood movement, the goal is the basic one of bringing local government closer to the people.  LA county government is the largest local government in the United States, with a population of 10 million, but has only a five-person board of supervisors.  If my remedial math serves, that means each supervisor governs roughly 2 million people.

The East LA incorporation drive runs counter to the received wisdom that municipal boundary change follows a kind of "public choice" logic in which the motivation of annexing cities is to loot the tax revenue of unincorporated areas and unincorporated areas are driven by the selfish desire to hoard their stash from being redistributed to the urban masses.  Here, it seems, the desire to incorporate stems from a yearning for self-government by a group of people who perceive themselves as a distinct community within the larger city.

Richard Briffault writes that there are two competing conceptions of local government in our political system: the polis and the firm.  Local governments are sometimes seen as little democratic republics, and other times as participants in a marketplace.  East LA's incorporation petition seems to rest on the former conception of local government -- a city is a forum for enlightened self-government. The reason East LA's petition has been stymied, however, is because LAFCO adheres to the latter conception -- local governments are business organizations.  It is telling in this regard that the principal reason LAFCO gives for disapproving the incorporation is that East LA lacks a sufficient number of big-box stores to support an independent city.

Listed below are links to weblogs that reference East L.A. Cityhood Proposal Defeated: