Wolf on the Supreme Court and the Environment 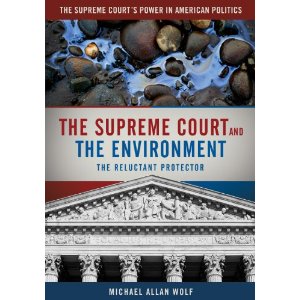 Michael Allan Wolf (Florida) has a new book out called The Supreme Court and the Environment: The Reluctant Protector (CQ Press, 2012).  Here's the Amazon blurb:

Silent Spring (1962) can arguable be cited as one of the most influential books of the modern era. This book, along with 1960's rampant activism reacting to high-profile ecological calamities, helped create the modern environmental movement. The Supreme Court and the Environment, written by Michael Wolf, discusses one of this movement's most important legacies, namely the body of federal statutory law amassed to fight pollution and conserve natural resources that began with the enactment of the National Environmental Policy Act of 1969. Instead of taking the more traditional route of listing court decisions, The Supreme Court and the Environment puts the actual cases in a subsidiary position, as part of a larger set of documents paired with incisive introductions that illustrate the fascinating and sometimes surprising give-and-take with Congress, federal administrative agencies, state and local governments, environmental organizations and private companies and industry trade groups that have helped define modern environmental policy.

And for a preview, Prof. Wolf has posted the introduction on SSRN.  The abstract:

This document contains the Introduction and Contents for The Supreme Court and the Environment: The Reluctant Protector (CQ Press/Sage 2012). When one views the body of modern environmental law — the decisions and the other key documents — the picture that emerges is not one of Supreme Court dominance. In this legal drama, the justices have most often played supporting roles. While we can find the occasional, memorable soliloquy in a Supreme Court majority, concurring, or dissenting opinion, the leading men and women are more likely found in Congress, administrative agencies, state and local legislatures, nongovernmental organizations, private industry, and state and lower federal courts.

What one learns from studying the Supreme Court’s environmental law output is that the justices for the most part seem more concerned about more general issues of deference to administrative agencies, the rules of statutory interpretation, the role of legislative history, the requisites for standing, and the nature of the Takings Clause than the narrow issues of entitlement to a clean environment, the notion of an environmental ethic that underlies written statutes and regulations, and concerns about ecological diversity and other environmental values. When we widen the lens, however, and focus on the other documents that make up essential parts of the story of the Supreme Court and the environment — complaints by litigants, briefs by parties and by friends of the court, oral argument transcripts, the occasional stirring dissent, lower court decisions, presidential signing statements and press conference transcripts, media reports and editorials, and legislative responses to high court decisions — we discover what is often missing in the body of Supreme Court decisions.

Looks fascinating, and is a very original take that situates the cases themselves within a broader context of Supreme Court jurisprudence and goes beyond to the larger networks of actors that shape law.

Listed below are links to weblogs that reference Wolf on the Supreme Court and the Environment: