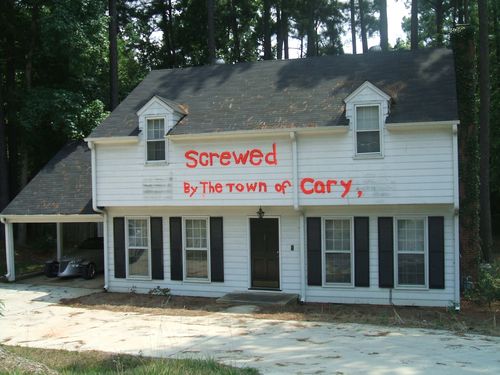 against the sign pictured here. The District court held that the Town’s code was content based because certain categories of signs (holiday decorations, public art, signs for town events) are exempt from regulation because of their content. The plaintiff’s received $44,000+ in attorney’s fees and the town is now appealing.

Content Neutral: In contrast, the district court in Neighborhood Enterprises v. St. Louis found the zoning code for the City of St. Louis  to be content neutral even though exceptions to the definition of “sign” include “works of art”. Here, the Missouri Eminent Domain Abuse Coalition displayed a 363 square foot sing which said,” End Eminent Domain Abuse” inside a red circle and slash.

I heard summaries of these cases as part of today’s APA 2011 Planning Law Review. During this webinar Dwight Merriam (VLS) summarized another first amendment case at the Supreme Court, Nevada Commission on Ethics v. Carrigan. This is an interesting recusal case, but not as exciting as the proposed construction of a Wal-Mart in the Town of St. Albans, Vermont.  An issue currently at the Vermont Supreme Court is whether the Environmental Court erred in affirming the site plan of this Wal-Mart despite obvious conflicts of interest on the part of several development review board members.  The alleged behavior of the board members is particularly surprising given other incidents by board members in this town with regard to the same proposal. In 2004, a board member wore a hat with the inscription “St. Albans Needs Wal-Mart.”

“In the deposition, he stated that he wore the hat  because “[i]n America I thought it was a free country so I wore the hat” and that “I thought in America you could wear anything you wanted on your head at any time because it’s still a free country.” In answer to a request that he further explain his interrogatory answer that he chose to wear the hat for its historical significance, he stated: “Historical, historically because there’s a gentleman named Sam Walton had nothing in his pocket and he built himself an empire. I say the American dream came true to him. That’s the only reason I wore the hat. No other reason."”

Listed below are links to weblogs that reference Test for Content-Neutrality: