The Final Four and Land Use in the Unzoned City 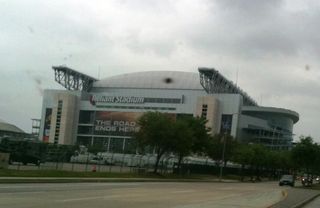 As many of you might be aware, the NCAA Men's Basketball Final Four has been this weekend in Houston, where I live and teach.  As I write this, the championship game is set to tip off in about an hour in Reliant Stadium, about a mile from my home.  So of course you must be thinking "how is Festa going to turn this into a land use issue?"

Already done, with my students' help.  On the first day of the semester, to make the point that land use issues intersect with almost everything that goes on in our communities, I put up the home page of the Houston Chronicle and challenged them to explain the land use issues in a given story.  The lead story was something about the then-upcoming Final Four.  So here's some of what we came up with on the fly:

Land assembly--where did they get the land to build the stadium and the parking?  It's next to the old Astrodome (you can see a corner of it in the picture), so I don't believe eminent domain was needed this time around, but you know that's always a big issue with new sports stadiums.

Use--the Reliant/Astrodome complex was just used up until about two weeks ago for one of the nation's largest Livestock Show & Rodeo events with accompanying carnival.  It's impressive that they could retrofit for the Final Four so quickly.

Transportation--can people get there?  Do the roads need to be widened, etc.?  If so, who pays, and are there legal changes needed?  Houston has a seven-year old light rail that goes from downtown through the Texas Medical Center to the stadium, and it's been quite busy the past weekend.  Also, there've been lots of limos, helicopters, and blimps around town the last few days--where do they go?

Local government--the stadium is goverened not by the City of Houston, but by an independent quasi-public County Sports Authority.  Plus the transportation is governed by a separate Metro agency.  However a lot of coordination is necessary for big events like the Final Four. 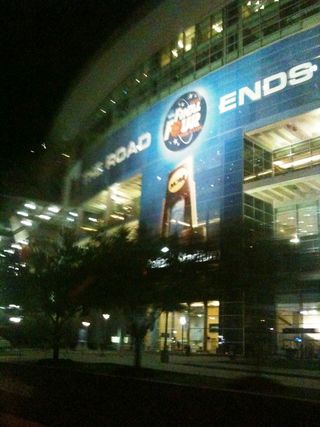 Facilities--lots of people coming in from all over the country; where do they stay, etc.  For example, I took a ULI-sponsored construction site tour about a year ago of the just-opened Embassy Suites downtown.  The city's goal was to get a hotel opened in time for the Final Four, so there was a fairly complicated tax incentive scheme put in place that involved changing the law to provide an occupancy-tax break for new hotels sited in a particular space (and they say we don't have zoning based on use).  The incentivized siting was between the light rail and the new Discovery Green park--where a lot of free concerts have been given as part of the festivities--and the downtown convention center, where the "Bracketown" official hoopla program was held.  All of this is just a few blocks from where I teach at South Texas College of Law.  Discovery Green is itself also a recently-built and critically acclaimed new urban park and public space.  Finally, all of the planning and coordination that involves a city's hosting a big event requires lots of logistics, regulatory changes, and many many permit approvals, for things ranging from temporary buildings to new signs.

So my students and I think there are a lot of land use issues involved with having the Final Four in town, and it goes to show that even in the Unzoned City, there are many ways that land use gets regulated and controlled.  It's been fun having all the activity in town, and . . . Go Butler!

UPDATE: It wasn't to be for the underdogs, so congrats to Connecticut.  The photo above was taken by Natalie Festa at almost the exact time that the national championship game tipped off.  "The Road Ends . . ." = land use metaphor?  Tuesday is the women's championship--don't tell my fellow Texans that I'll be pulling for Notre Dame vs. A&M.

Listed below are links to weblogs that reference The Final Four and Land Use in the Unzoned City: