Now it's time to try and make a land use-related post about St. Patrick's Day.  First of all, the legend of St. Patrick has it that he drove the snakes out of Ireland.  If that isn't an awesome land use regulatory feat, then nothing is!

St. Patrick is credited with bringing Christianity to Ireland, and the Church played a major part in land control over the centuries.  Later on in Irish history, the Catholic-Protestant struggle had a great deal to do with English land ownership and the relationship of the Irish people to the land.  Even until recent years, the symbol of St. Patrick has been part of the controversy over the IRA and Northern Ireland.

St. Patrick's Day has spread throughout the Irish diaspora worldwide.  In the U.S., St. Patrick's Day has, of course, served as a semi-official Irish-American holiday.  Irish immigrants moved throughout the country, but are particularly known for rising to political power in the cities.  Anti-Irish/Catholic prejudice loomed over the Gilded Age ("no Irish need apply") and the Progressive Era (multifamily housing (the "pig in the parlor") associated with immigrants).  Irish Catholic churches played a major role in urban affairs and continue to have a presence in First Amendment and RLUIPA issues.  After attaining some political power in urban political systems such as Tammany Hall, Irish-Americans have played a central role in city governance for over a century.  My undergrad alma mater, Notre Dame, served as a source of pride for Irish-Americans for its competitiveness in that land-use struggle known as football, and later in academics.  When John F. Kennedy was elected President, it seemed to many Americans of Irish extraction that they had finally become accepted into the American Dream. 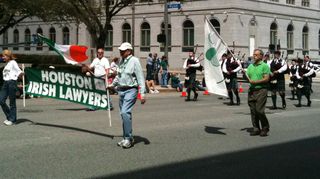 In the last few decades, St. Patrick's Day has continued to influence American land use issues.  Major celebrations take place in many U.S. cities, and places like Chicago, most famously, and Savannah dye their rivers green for the occasion.  [ancillary question: is being "green" a good thing, in this sense?]  In some American cities the St. Patrick's Day parade has become one of the most important political events of the year, which has led in turn to protracted litigation over the question of who gets to decide who marches in privately-organized yet publicly-sanctioned St. Patrick's Day parades.  The U.S. Supreme Court weighed in on the matter in Hurley v. Irish-American Gay, Lesbian & Bisexual Group of Boston, 515 U.S. 557 (1995).  Justice Souter's opinion for a unanimous Court upheld the First Amendment associational rights of the parade organizers to exclude an Irish-American GLBT group (would the case come out the same way today?).

St. Patrick's Day has a lot of cultural significance and a little bit of land-use significance too.  So hoist a green beer and celebrate.  [And in 2011, Jim and I are hoping that the luck of the Irish works all the way to Houston for the Final Four!]

Listed below are links to weblogs that reference Happy St. Patrick's Day 2011: