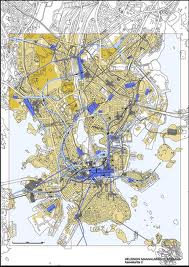 Hello all and thanks for the welcome, Matt.

For years cities, such as Montreal (the RESO), have been developing space underground.  In what CNN reports as a "first," Helsinki has developed an Underground Master Plan.  The plan designates a diverse group of uses for the underground area, ranging from industrial to recreation uses, such as an existing swimming pool (which, fortunately, doubles as a bunker when necessary).  According to the report, Helsinki sits on bedrock strong enough to support the existing streetscape even when space is carved out for the lower levels.  The CNN report claims a host of environmental benefits from the action, many of which are disputed in the comments.

As cities such as Helsinki start to think about the relationship between the street level and the subsurface (as inhabitable space), the next step may be to craft a three dimensional master plan.  And who knows, this may be Seattle's chance to recommission its underground, although "[w]hen your dreams tire, they go underground and out of kindness that's where they stay." (Margaret Fuller).

Listed below are links to weblogs that reference Three Dimensional Master Plan?: