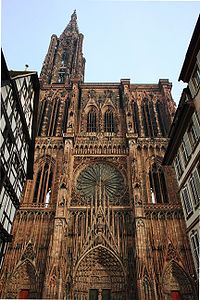 The beautiful cathedral city of Strasbourg, France, has some lessons to teach the US about inner-city transit.  It's interesting to note that the debate in Strasbourg wasn't over whether to build more public transit (or eliminate it), but whether to build it above-ground or underground.  Ben Adler writes:

"This being France, where the entire political spectrum is to America’s left, the conservatives running for city council in 1989 actually favored building a subway. But the socialists, led by Catherine Trautmann and Roland Ries, wanted to build a new tram. Conservatives and local business owners objected, arguing that a tram would take precious lanes away from cars. But that was exactly the point: to transform streets from hectic, unpleasant gasoline alleys into vibrant, multi-use communal spaces. “The tram means that you change the city,” explains Jonathan Naas, transportation policy coordinator for Roland Ries, who is now mayor. By creating a buffer from the cars, he says, “You create places to walk, outdoor cafes to sit outside.”

Click here for a link to Ben Adler, "The French Revolution:  How Strasbourg Gave Up the Car (And Why Midsized American Cities Can Too)," Next American City (Winter 2009).

Will Cook, Charleston School of Law

Listed below are links to weblogs that reference French Lessons: