The federal Wilderness Act, enacted back in the optimistic year of 1964, defines such areas as federal land “where the earth and its community of life are untrammeled by man, where man himself is a visitor who does not remain.”  Today, Congress began debate on legislation to expand the stretches of lands designated largely as off limits to construction, forestry, mining, and other human intrusions.  But here is a fascinating story of a growing rift in the environmental community over whether some lands –- especially the open deserts of the Southwest, including California’s Mojave –- might be better-suited for large-scale solar development or wind farms.  While the traditional environmental line is that conservation, not increased production, should take precedence in the nation’s energy policy, places such as the Mojave also offer some of the best opportunities in the nation for large-scale production of renewable energy.  And California has, of course, pledged to increase vastly its renewable energy share, largely in order to decrease its carbon emissions. 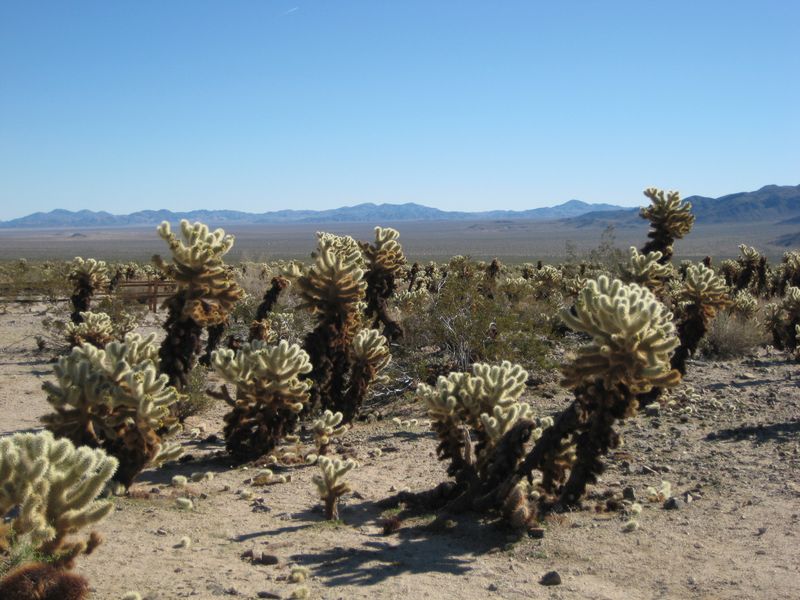 I find it nonsensical to make categorical assertions that either one of two worthy land uses –- be it pure wilderness or renewable energy –- should always take precedence in land use policy.  But it does seem to me that the ideal of the Wilderness Act was always a bit cockeyed.  While we once might have imagined “untrammeled” nature, we now know that few areas of the planet have been untouched by humans, as far back as centuries ago.  Humans, like beavers, birds, and tortoises, have made their mark to some extent in most places, including the Mojave.  As a veteran hiker in wildernesses from Virginia to California to Alaska, I also know that designated wilderness areas are trammeled by hiking boots and horse hooves and altered by fire rings and foot bridges.  So while of course I wouldn’t want my personal favorite areas, such as California’s Joshua Tree Pinto Basin (see my January 2009 photo), filled with solar panels, my inclination is that our age needs land for renewable energy in California perhaps more than it needs more wilderness areas.  After all, in 100 years, when we figure out how to beam down fusion-created electricity from the moon, we can always remove the panels (unlike with houses) and let the desert return to its relatively untrammeled state ….

[Comments must be approved and thus take some time to appear online.]

Listed below are links to weblogs that reference Wilderness or renewable energy? …:

It is such a false choice though. There's PLENTY of non-wilderness land available for solar and power. It isn't Joshua Tree Pinto Basin or no solar at all.

There could be no better investment in America than to invest in America becoming energy independent! We need to utilize everything in out power to reduce our dependence on foreign oil including using our own natural resources. Create cheap clean energy, new badly needed green jobs and reduce our dependence on foreign oil.The high cost of fuel this past year seriously damaged our economy and society. The cost of fuel effects every facet of consumer goods from production to shipping costs. It costs the equivalent of 60 cents per gallon to charge and drive an electric car. If all gasoline cars, trucks, and SUV's instead had plug-in electric drive trains the amount of electricity needed to replace gasoline is about equal to the estimated wind energy potential of the state of North Dakota.We have so much available to us such as wind and solar. Let's spend some of those bail out billions and get busy harnessing this energy. Create cheap clean energy, badly needed new jobs and reduce our dependence on foreign oil. What a win-win situation that would be for our nation at large! There is a really good new book out by Jeff Wilson called The Manhattan Project of 2009 Energy Independence Now. http://www.themanhattanprojectof2009.com