The media coverage and debate about the protests in Wisconsin over the Governor's plan to remove public sector collective bargaining rights has been extremely engaging. It's been frustrating to see it at times superficial and fascinating when at times it's been quite in depth. I have to admit that watching and reading it all has been both stressful and energizing--and public sector labor law isn't even really my field, although I am mostly a product of public schools, was a government worker for most of my time in practice, my parents have been public workers for much of their working lives (different government), and my grandparents too, were public workers (yet a third government), so I feel connected to the issue.

And so suitable for a Friday, when we all likely need some levity to relieve the stress, enjoy the 100 Best Protest Signs at the Wisconsin Capitol courtesy of Buzzfeed. My favorite, shown above, are the anguished snowpeople.

I'm off this morning to Kuala Lumpur, Malaysia, for my Fulbright.  I'll be facilitating a mediation training program coordinated by the Industrial Court (here's a brilliant idea the U.S. should consider: channel all labor/employment cases through a single administrative/adjudicatory agency!), and learning all I can about the labor and employment law of Southeast Asia.

I expect my blogging will slow down a bit while I'm there.

If you have recent accomplishments to share, don't forget to send them our way.  One of the best things about blogging here on Workplace Prof Blog is the opportunity to keep up with -- and brag to the rest of the blogosphere about -- the myriad accomplishments of our readers.  So please -- let us know what you're up to.

Marcia, Jeff, Paul, and I are thrilled to announce the addition of Charlie Sullivan as a fifth permanent editor of Workplace Prof Blog. Charlie's posts over the last several months have added real depth and insight to the Blog.  We are exceptionally happy to have him on board.

... for a favorable citation in today's Washington Times.  The article, Is Use of Interns Abuse of Labor?, picked up on Jeff's post Sunday on Unpaid Internships.  Here's an excerpt of the Washington Times article:

Labor law blogger Jeffrey M. Hirsch, associate professor at the University of Tennessee College of Law, said, "It's obviously been an issue for some time, but the bad economy has given employers more incentives to pinch pennies and made interns more desperate for experience - even the unpaid variety."

While demand for coveted internships is at an all-time high, "they can also undermine the purpose of wage laws and highlight class problems when only more wealthy students can afford months of unpaid full-time work," Mr. Hirsch noted.

Kevin is a shareholder in the D.C. office of Littler Mendelson. He currently teaches Cross Cultural Management and Negotiations, and next semester he will teach Global Labor and Employment Law, both at Georgetown University's School of Continuing Studies.

Kevin began his career in employment and labor law with the U.S. Equal Employment Opportunity Commission as an investigator, law clerk, and administrative judge. Kevin now represents clients in employment litigation before administrative agencies and state and federal courts, labor arbitrations, collective bargaining negotiations, and equal employment counseling and training. He represents a variety of employers, including those in the transportation, education, hospitality, distribution, healthcare, government contracting, and nonprofit industries.

Kevin's airline and railroad experience includes representation proceedings and carrier interference cases before the National Mediation Board; federal court litigation with unions under the Railway Labor Act; system board of adjustment and public law board arbitrations; collective bargaining negotiations, including initial contracts, concession bargaining, and merger agreements; and advice regarding contract administration.

Kevin received his B.A. from Boston University in 1992 and his J.D. from American University Washington College of Law in 1996. He lectures regularly on public charter school and education matters. In 2007, he addressed the American University Journal of Gender, Social Policy & the Law's conference on assisting law students with disabilities. His comments about workplace issues have been quoted in TIME Magazine, USA Today, and The Washington Times.

We are proud to introduce Jason Bent as Workplace Prof Blog's Inaugural Distinguished Guest Blogger.  He'll be blogging with us over the next month or so.

Jason's employment litigation experience includes defending an employer against a novel class action brought by the United States EEOC alleging a "pattern or practice" of sexual harassment in the workplace. Jason has represented a number of employers against discrimination claims before the EEOC and the Illinois Department of Human Rights. Jason has also represented an employer in connection with a Department of Labor audit of the employer's wage and overtime payment practices under the Fair Labor Standards Act.

Prior to forming Smith & Bent, Jason was an associate at Foley & Lardner, LLP. Before entering private practice, Jason clerked for Judge Cornelia Kennedy of the Sixth Circuit, and for Judge Joan Gottschall in the U.S. District Court for the Northern District of Illinois.

Jason is the author of Systemic Harassment (forthcoming Tennessee L. Rev. 2009) and What the Lilly Ledbetter Act Doesn’t Do: “Discrete Acts” and the Future of Pattern or Practice Litigation (Rutgers Law Record 2009).  He serves on the Editorial Board of The Labor Lawyer.

Workplace Prof Blog is looking to help bridge the gap between traditional scholarship and blogging by hosting periodic guest bloggers.  The guest bloggers would be welcome to contribute short pieces and links about new developments, but their primary focus will be to contribute longer, perhaps multi-part posts on their current scholarship.  This would be an especially good forum for junior scholars working on labor/employment topics that are currently in the news -- labor law reform, healthcare/pension reform, disability law, the evolving test for employment discrimination, etc.

The commitment is short-term (perhaps a month or so), and the guest blogging will benefit bloggers and readers alike.  If you think you might be interested, email Rick.  If you're swamped now but would be interested in guest blogging in the future, let me know.

Or, consider commenting to this post to nominate someone.

I'll be guest blogging this month over at PrawfsBlawg, mostly on law school governance issues.  Check out my first post. 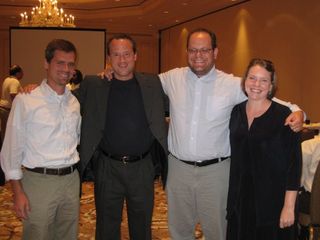 Thanks to Cynthia Nance for taking this photo at the SEALS conference and sharing it with us.  (Was this right after the panel on self-promotion?)

It's official -- Paul Secunda is rejoining Workplace Prof Blog.  The divorce was painful, but reconciliation is ever so sweet.  (Paul:  Have you told Mindy yet?)

Paul Caron at Tax Prof Blog has the latest rankings of law-professor-edited blogs over the last 12 months.  Pardon the self-congratulation, but this blog did well.  We had over 400,000 visits and moved up a couple of spots from last year to become #14 out of all of the ranked sites.  We're also #5 out of 17 ranked subject-specific sites.

Most important, thanks to all of you for your support.  And although the quantity is nice, I've been far more impressed with the quality of our readership.  So keep reading, writing comments, and forwarding news (even if we don't have time to post them all).

-JH and the rest of the crew

Thanks to the Delaware Employment Law Blog for listing us in their top-20 list of Employee Benefit Blogs. Hat tip: Paul Secunda.

Thanks to all of you for making Workplace Prof Blog the 16th most-read law prof blog (by number of visitors), and 17th by number of page views.  For the complete list, see Paul Caron's chart.

What with the abrupt transition from the holidays and conferencing in San Diego to beginning-of-the-semester catch-up, I haven't found time to properly thank Paul for his last several years of service to Workplace Prof Blog and his ongoing service to the labor/employment law academic community.  A few months after I inherited the blog that Rafael Gely had founded but then discontinued, while I was still in the process of emailing every labor/employment professor individually to let them know I was resurrecting the blog, I received an email out of the blue from Paul asking whether I was interested in having a co-blogger.  I immediately accepted, and it was the best blog-related decision I ever made.

Paul has a level of energy that I wish I had when I was 20.  He's been a compulsive blogger, which no doubt helps explain why he's feeling burned out.  His posts often dug beneath the superficial story to the deeper meaning below.  He's a team player in the best sense of the phrase -- one of the things I like most about Workplace Prof Blog -- and it's a value Paul helped instill -- is that it's not about the bloggers, but rather about helping readers forge and maintain connections in the labor/employment law academic community.

Paul's a brilliant academic, a cheerleader for all of us, a great friend, and an all-around fantastic person.  It's been a privilege working with him on the blog, and it's comforting to know that the one thing Paul will never be to anyone is a stranger.

It is with somewhat mixed feelings that I have determined to cease blogging at the Workplace Prof Blog.  Considerations of spending more time with my family and having more time to write have led me to this difficult decision.

Over the three years that I have blogged here with Rick and then Jeff and Marcia, I have learned so much from the various individuals who have sent me interesting articles and stories.  It has also been my pleasure to keep the labor and employment law community up-to-date on the all the happenings in our community and around the world. I hope that I have been able to contribute just a little bit to the formation of a more cohesive labor and employment law professor community.

I look forward to seeing many of you at the various conferences and colloquiums in the coming days and years.  I will also try to contribute a guest post once in a while on this site.

Thanks to all the blog readers and my fabulous co-bloggers for all the great times.

See the update to Jeff's post yesterday on undocumented employees cleaning the house of Department of Homeland Security Director David Chertoff.  Don't DHS employees have anything better to do?  In any event, I'm glad DHS folks are reading Workplace Prof Blog.  Perhaps they'll learn a thing or two.

Workplace Prof Blog received this morning its 1,000,000th visit.  Thank you for reading, offering suggestions, and sending us content.  What makes Workplace Prof Blog so successful is the uniquely supportive community of labor/employment/benefits colleagues.  It is a privilege to be a part of such an incredible group of people.

Paul Caron at Tax Prof Blog has the latest rankings of law professor blogs.  Not to toot our own horn (heck, let's be honest, that's exactly what we're doing), but this blog did quite well.  We had over 400,000 visits during the past year, ending on September 30.  Given that we've had just under a million (!) visits since 2004, that's quite a strong year.

This year's traffic makes us #16 out of all the ranked sites.  We're also fourth out of 17 ranked subject-specific sites (fifth out of 18 if you classify Leiter Report as a philosophy site, but it's usually much more general than that).  Not bad for an area of law that's on almost no bar exams.

Most important, thanks to all of you for your support.  We would be nothing without our readers and this is yet another reminder of how lucky we are on that score.  So keep reading, writing comments, and forwarding news (even if we don't have time to post them all--sorry about that).

-JH and the rest of the crew