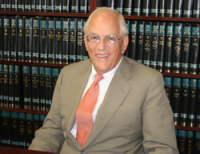 Many thanks to Alvin Goldman (retired, U. Kentucky) for contributing this tribute to Paul Tobias:

Paul H. Tobias, a graduate of Harvard College (AB 1951) and Harvard Law School (LLB 1958) died early this year. He spent the majority of his long career representing individual employees. Paul was a founder and first Executive Director of the National Employment Lawyers Association, an employee rights organization that with its affiliates now has over 4000 members. Mr. Tobias authored 15 published articles and 3 book chapters in the field of labor and employment law, was an employee advisor for the American Law Institute’s Restatement of Employment Law, and a frequent speaker at bar and other programs examining employee rights.

Paul Tobias was perhaps best known as an innovative litigator who challenged the traditional American approach to dismissals and urged colleagues to battle against what he characterized as the “just cause conspiracy”. His efforts in this area prompted him to study and to urge others to study how other employment law systems do so much more to protect workers from unfair dismissal.

I initially met Paul when I was teaching at Northern Kentucky -- Paul's firm is across the river in Cincinnati. Such was his humility that I did not realize until later that I had met a giant in the field. He is sorely missed. The world is a better place because of him.

Thank you for posting this. Paul was one of the kindest souls I ever met, as well as a tireless and effective advocate for workers. He will be missed.

Paul was a treasure... his many years of service as a Board member were a gift to the organization and to everyone who served with him.

What a loss. Paul Tobias had a genius for law, and, just as important, was a really lovely, down-to-earth person. I met him very early on in my academic career when I was conducting a survey of NELA lawyers for my very first tenure article. RIP, Paul Tobias.