There is a great story at the Washington Post which addresses Delta's union avoidance campaign targeted at thousands of its workers.  The tactics are nothing new in the world of labor law, but have caught widespread attention in the era of social media.  In particular, Delta has received enormous criticism for its posters which suggest that workers would be better off using their union dues to watch football with friends or to buy a video game system.  The posters can be seen here: 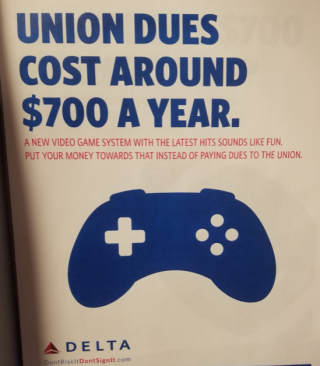 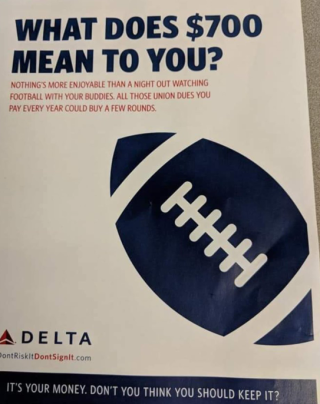 Again, while we have all seen these types of campaigns in the past, going too far in today's digital age can have an unanticipated backlash -- including from presidential candidates and others in the current highly politicized environment.

I worked as a blue collar airline worker from roughly 1978-1992. Historically, Delta has ALWAYS been the southern-based, anti-union airline. Of course, even going back a few decades it had to operate on a “me too” basis because unions at United, Eastern, American, & etc. delivered the goods. Delta is now de facto Delta/Northwest. While Northwest was a unionized carrier, the union at times had a shaky reputation amongst union folk. Back in the dinosaur days airlines campaigned by VCR tape and the like. I still have a tape entitled, “Destroy Your Ballot!” Given the “50% + 1 of the eligible voter” electoral structure there was no need to run on “Vote No.” Plus ca change . . .

If a customer wants to choose an airline (for travel in the United States) based on each airline's stance about labor unions, is this a feasible thing to do?