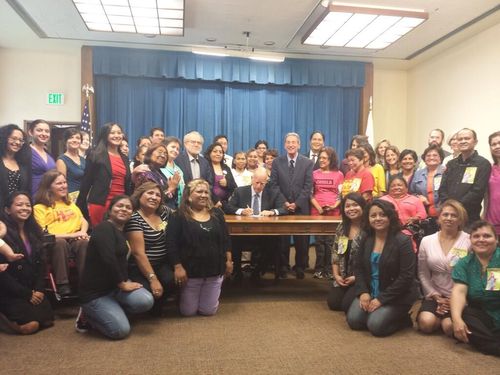 On September 26, 2013, Governor Jerry Brown signed into law AB 241,extending overtime protection for California domestic workers who spend a significant amount of time caring for children, elderly and people with disabilities.  Last week, the federal Department of Labor finalized rulesthat significantly extend federal minimum wage and overtime protections to domestic workers who care for the elderly and people with disabilities as well as those hired by third-party agencies.

These two significant changes to federal and state law will end nearly 75 years of exclusion of domestic workers from basic wage and hour protection.

The Women's Employment Rights Clinics of Golden Gate University School of Law has served as legal counsel to the California Domestic Workers Coalition, which sponsored AB 241.   It has been a momentous journey for its students and the Clinic to be part of grassroots worker-led movement to redress the unfair and unequal treatment of domestic workers.

Thanks to Hina Shah for letting us know.

Listed below are links to weblogs that reference California Acts on Overtime for Domestic Workers: