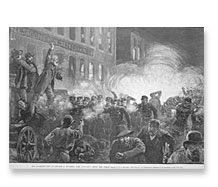 The Haymarket Affair Digital Collection, an offering of the Chicago Historical Society, brings to life an important moment in the history of both Chicago and the American labor movement.  In May 1886, a crowd gathered in Chicago to protest the killing, by police, of two laborers during a confrontation the previous day.

A large group of police officers intervened to break up the protest and, as they ordered the crowd to disperse, a bomb was thrown toward the officers ultimately killing seven of them.  Numerous political radicals were arrested and, ultimately, eight were found guilty of murder with four being executed.  Scholars today find the legal proceedings in the matter to be tainted with prejudice against the views of the defendants and the labor movement generally.  The site is composed of several sections that provide historical background and many primary source documents.  The Chronology provides a concise recounting of events from May 1, 1886 when coordinated strikes were held to demand the eight-hour workday to June 26, 1893 when three of the defendants were finally pardoned.  Another section of the site provides an interesting explanation of the evidence used by historians to document the affair.  As the site states, “Most of what remains from the Haymarket Affair are documents and artifacts that some citizens decided . . . ought to be preserved as part of the enduring narrative of the event.”  The collection itself contains images of trial documents, manuscripts, artifacts, broadsides, photographs, engravings, and other items.  Items of particular interest include witness testimony, trial exhibits, Chicago police reports, the national eight-hour law proclamation, and photographs of the defendants.  Overall, the site provides users with a significant resource in researching American labor history.

Listed below are links to weblogs that reference Haymarket Affair Digital Collection: