Rise in Unemployment Negatively Correlated With Support for Unions 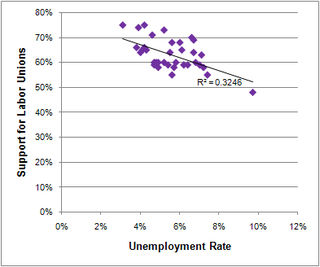 Have to admit that I was a little taken aback when I saw this post (and chart) from Nate Silver at 538.com:

Gallup recently found sympathy toward labor unions is at an all-time low, at 48 percent. but then again, unemployment is close to its post-WWII highs. Gallup did not happen to ask this question in late 1982 or early 1983, when unemployment exceeded 10 percent. They did ask in August 1981, when unemployment was up to 7.4 percent and rising rapidly, and at that point support for labor was at 55 percent, which was the lowest figure it had achieved before this year's survey.

The regression line finds that, for every point's worth of increase in the unemployment rate, approval of labor unions goes down by 2.6 points. Alternatively, we can add a time trend to the regression model, to account for the fact that participation in labor unions has been declining over time. This softens the relationship slightly, but still implies a decrease in approval of 2.1 points for unions for every point increase in unemployment. Both relationships are highly statistically significant.

So why does support for labor unions go down when unemployment rates rise? Here are some possibility, but would love to hear other thoughts from the reader:

1. The Blame Game:  "It is because of unions and their unreasonable demands for higher wages and benefits that American companies are losing jobs to global competition."

2. We Need More Unions: "The decrease is union support has actually caused higher unemployment rates, not vice versa. If there were more supports for union, we would have a large middle class, greater consumer spending, and more jobs for everyone."

3. Need More Safety Nets: "Unions have shot themselves in the foot. Rather than working for saftey net legislation like their European peers, unemployment means that those unemployed blame the unions for not helping them negotiate this difficult economic climate."

4. Resentment of Unions: "When unemployment is high, the non-unionized working class resent unions for giving their members greater job security while they're left out in the cold."

There are many more explanations/theories obviously, so please provide your own in the comments.

Listed below are links to weblogs that reference Rise in Unemployment Negatively Correlated With Support for Unions :

I agree with "Need More Unions", but another possibility is the labor movements effects on trade agreements. Trade agreements allow companies to move overseas taking jobs with them. Labor Unions are seen as protectionist. While severe protectionism is a bad thing, so is allowing jobs to leave without increasing the buying power of the foreign workers so they import products made from kept jobs.

I think these are all reasonable explanations. I would also add that the percentage of Americans working in traditionally organized fields (ie. manufacturing) has decreased while other less organized fields (technology for example) have grown. That changing landscape has no doubt had an effect. Support for labor is often times a tradition passed down through a family. I support labor because my father is very active in his union and I understand that the advantages I enjoyed in life (Jesuit education, college and eventually law school) can be traced directly to the good wages that came from my father's union job. As fewer and fewer people are union members the effect is exponential - their kids don't have sympathy for labor and on down the generations.

1. I'm going to play dimestore shrink and suggest that we've got a twist of Stockholm Syndrome-type behavior going on with workers & their employers during recessions. During tough times, having a job, i.e., not being laid off, makes workers more loyal to their employers even in the face of reduced/frozen pay and more stressful working conditions.

2. Let's not forget about public perceptions of public sector labor unions. During recessions, stories about pension abuse, public employee corruption, and the unions associated with these shenanigans become magnified and press worthy. The labor movement becomes an easy target for recession-stressed workers who believe their tax dollars are being wasted or misused.

The conservative media has successfully spun the "blame game," e.g. if it weren't for "greedy" autoworkers, the American auto industry would not be collapsing. The solution is not just accurate information (it's already out there to a large extent), but learned accuracy via lived experience. The more unionized workers, the more workers who will see past the conservative and corporate smokescreen.

I agree strongly with David's #1, or maybe a slight variation of the notion. I was a union organizer throughout the 1980s and can attest that, when the unemployment rate was highest union organizing was very difficult because employees were far more committed to the employer's worldview. The slight variation is that I'm not sure about the full dimensions of the syndrome: it was something more akin to the naked fear of losing one's job. So, during the crisis, I will sound more convincingly as if I support the employer's views (even to the point of providing consistent responses on presumably anonymous polls.) By the late 1980s we were able to make headway with the same employees who had been in opposition because the terror of the early 80s had subsided somewhat.

I'm with David. I think many people do not understand unions and buy into the conservative jargon that unions and their "inflexible and unsustainable demand for high wages" have brought about the downfall of the auto industry, the airline industry, etc.

I also think that labor must take part of the blame as well. Too many people think that employment rights are a given (some kind of universally recognized natural right) and that unions are no longer relevant. I think that unions (the people who brought you the weekend) need to do more to boost their image with the public at large and keep in-fighting (which is viewed as wasteful and petty)out of the limelight. Right now, unions make an attractive scapegoat that is easier for people to understand than complicated economic theories.