The U.S. current-account deficit decreased to $130.4 billion (preliminary) in the first quarter of 2019 from $143.9 billion (revised) in the fourth quarter of 2018, according to statistics released by the Bureau of Economic Analysis (BEA). The deficit was 2.5 percent of current-dollar gross domestic product in the first quarter, down from 2.8 percent in the fourth quarter. 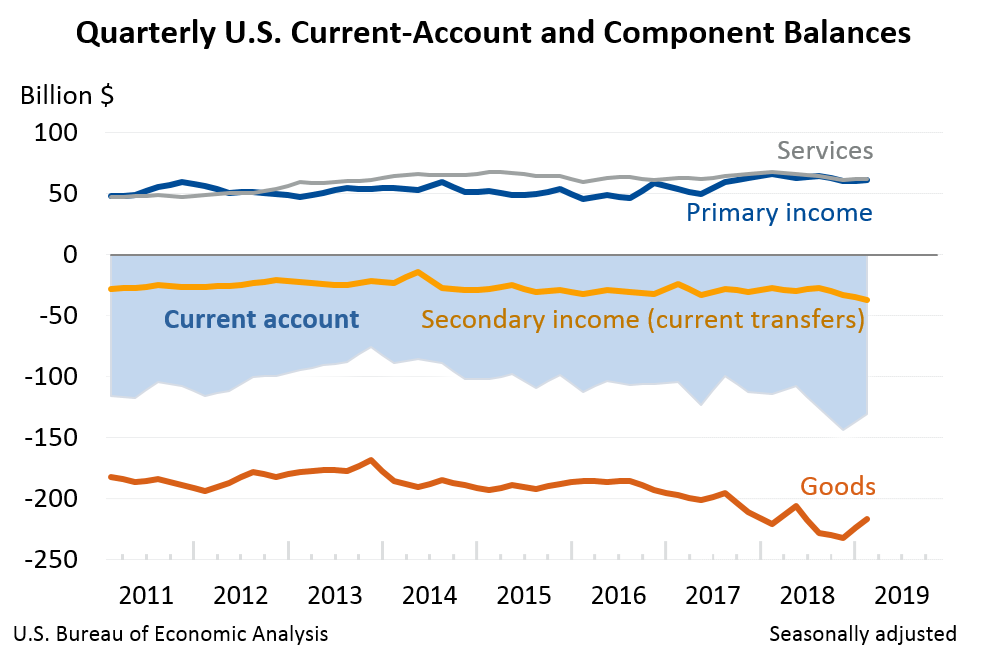 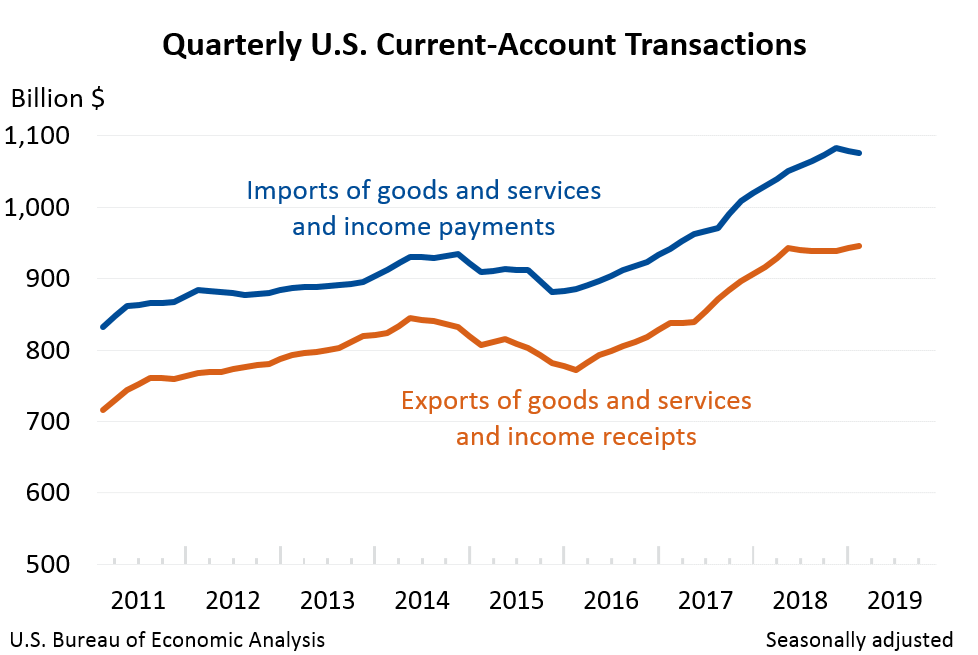 Exports of goods and services and income receipts

Exports of goods and services and income receipts increased $7.2 billion in the first quarter to $945.9 billion.

Imports of goods and services and income payments

Imports of goods and services and income payments decreased $6.3 billion in the first quarter to $1.08 trillion.

In the international transactions accounts, income on equity, or earnings, of foreign affiliates of U.S. multinational enterprises consists of a portion that is repatriated to the parent company in the United States in the form of dividends and a portion that is reinvested in foreign affiliates. In response to the 2017 Tax Cuts and Jobs Act, which generally eliminated taxes on repatriated earnings, some U.S. multinational enterprises repatriated accumulated prior earnings of their foreign affiliates. In the first, second, and fourth quarters of 2018, the repatriation of dividends exceeded current-period earnings, resulting in negative values being recorded for reinvested earnings. In the first quarter of 2019, dividends were $100.2 billion while reinvested earnings were $40.2 billion (see table below). The reinvested earnings are also reflected in the net acquisition of direct investment assets in the financial account (table 6). For more information, see "How does the 2017 Tax Cuts and Jobs Act affect BEA’s business income statistics?" and "How are the international transactions accounts affected by an increase in direct investment dividend receipts?"

There were no capital-account transactions recorded in the first quarter, following receipts of $2.7 billion in the fourth quarter. The fourth-quarter transactions reflected receipts from foreign insurance companies for losses resulting from the wildfires in California. For information on transactions associated with natural disasters, see "What are the effects of hurricanes and other disasters on the international economic accounts?"

Transactions in financial derivatives other than reserves reflected first-quarter net borrowing of $21.4 billion.