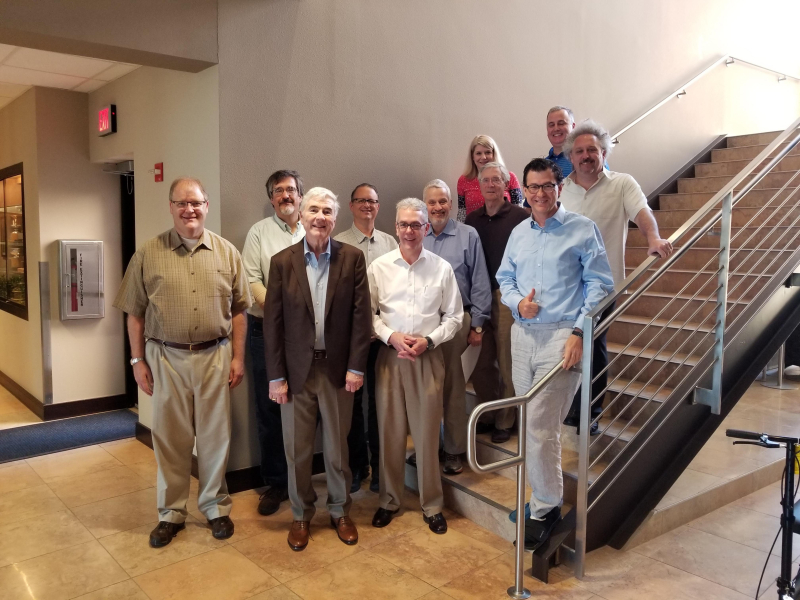 The Texas tax professors gathered in Lubbock, Texas, at Texas Tech University School of Law. The papers critiqued included:
Session #1: Paper from Terri Helge (A&M) (tax exempt orgs)
Lead Commentators: Dennis Drapkin (SMU), Alyson Outenreath (TTU)
Session 2: Paper from Jack Manhire (A&M) (tax compliance)
Lead Commentator: Steve Black (TTU)
Session #3: Paper from Brett Wells (UH) (§355)
Lead Commentators: Bruce McGovern (South Texas), Mark Cochran (St. Mary's)
Session #4: Open Discussion of Current Projects
Session #5: Paper from Cal Johnson (UT) (tax and economics)
Lead Commentator: William Byrnes
Session #6: Paper from Andy Morriss (A&M) (English tax rule)
Lead Commentator: Jack Manhire (A&M)
Session #1: Terri Helge’s paper will be a follow-up to her article Rejecting Charity: Why the IRS Denies Tax Exemption to 501(C)(3) Applicants, 14 Pitt. Tax Rev. 1 (2017). This new paper will be an empirical study of IRS revocations of exemptions.
Session #2: Jack Manhire’s paper will be a follow-up to his article Tax Compliance as a Wicked System, 18 Fla. Tax Rev. 235 (2016). Jack’s new paper is tentatively titled Visualizing a Wicked System Theory of Tax Compliance. Jack’s paper will consider whether tax compliance can usefully be considered in terms of compliant vs, non-complaint returns. Jack writes: "The hope is to see, via a heuristic model, how parameters that the tax authority can directly control interact with indirect attributes (including parameters that non-tax regulatory authorities can directly control) to a affect the positive or negative growth of the population of compliant tax returns. In this way, the heuristic hopes to account for the complicatedness" of tax compliance (the \top-down" organization of a structural system), and the iterative \complexity" of the system (the \bottom-up" non-directed and self-organizing attributes of a dynamical system) that are both found in \wicked systems."
Session #3: Brett Well’s paper will be on Section 355. Brett writes: "I would like to present a paper on how to reform Section 355. Section 355 is a hodgepodge of bolt-ons that have not been thought through in a comprehensive way, and at the heart of 355 is a very subject business purpose and device test. The device test was designed under an old bailout of E&P at capital gains rates concerns, but we have had rate parity for a decade yet the device test lives on unchanged. The device test should be refocused for the issues that are relevant today, and the business purpose test should be more objectified, and Section 355(d), Section 355(a)(2)(D), and Section 355(e) should be harmonized into a coherent regime. This is the focus of the paper, and I would greatly benefit from a good discussion from others.”
Session #5: Cal Johnson’s paper will be on the macro effects of the 2017 Tax Bill. Cal writes: “Johnson argues that the $2.5 trillion spent on incentives for capital over ten years in the 2017 Tax Bill are a waste of money because American capital cannot find investments with positive returns, above inflation. The Tax Bill will reduce the returns further into the negative range. Wasting $2.5 trillion on no-growth capital is going to push federal debt to the critical breaking point where our creditors no longer believe us and no longer consider U.S. debt to be risk-free. As that crisis approaches, we will need to undo incentives to no-growth capital.”
Session #6: Andy Morriss’ paper is not a follow up to anything! It concerns the codification of a common law rule called the “Hastings-Bass Rule” by Jersey (old, not new). The rule allows for correction of errors by trustees in some circumstances (mostly tax). After English courts dramatically restricted the common law rule, Jersey codified the broader version. Andy writes: “In this paper, I argue that this represents a positive example of the O’Hara-Ribstein law market in action, with Jersey seeking a competitive advantage in the global competition for trusts by enshrining the Hastings-Bass rule in its statutes and using the opportunity to improve on the common law version the statute replaced.”