Forgive the alarmist headline.  But I just read Citizens for Tax Justice Network (CTJ)*/ITEP defending FATCA because it can raise $40 billion to $70 billion tax revenue a 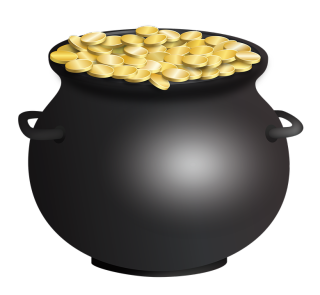 year for the U.S.  Enough already.  I hope that Citizens for Tax Justice/ITEP are correct and that $70 billion a year remains to be recovered by the IRS from non-reported foreign income.  I work for a public taxpayer-funded academic research institution.  If all the FATCA digging can discover a $70 billion treasure chest that can be spent on higher education support (instead of the Great Southern Wall) then I'm first in line with my hat out for further research funding.  While there may be supportable reasons for Tax Justice / ITIP to argue for requiring foreign institutions to submit the equivalent of the 1099 series to the U.S. Treasury, the collection of an additional $70 billion in tax revenue is likely not one of them.  So let's look at the $70 billion of hidden tax revenue waiting to be discovered....

The article states that "it is estimated that the United States loses $40 to $70 billion in revenue annually due to individual income tax evasion."  Its citation of this data is the September 2016 Congressional Research Service report: FATCA Reporting on U.S. Accounts: Recent Legal Developments.  However, I read the CRS report and it is primarily about the status of IGAs and protection (I argue lack thereof) of taxpayer information shared.  I could not find in the CRS the $40 - $70 billion figure or even a discussion about the calculation of revenue annually lost to individual income tax evasion.

And that term implies "all" tax evasion (domestic and foreign-based nonreporting) which is quite different from previous claims of $150 billion tax revenue lost from nonreporting of foreign income.

I think what the CTJ / ITEP commentator meant to citation is a Congressional Research Service (CRS) Memorandum of July 23, 2001 referencing an inquiry made by the House Majority Leader as to the method used by attorney Jack Blum, an IRS contract consultant, to construct the then estimate of $70 billion of illegal tax evasion losses due to tax havens. This figure was contained in his affidavit submitted in support of the government’s request from the federal court for a John Doe summons for records from MasterCard and American Express.  However, according to the CRS Memorandum: “Mr. Blum’s estimate was contained in a declaration filed in connection with a petition the Internal Revenue Service filed with the U.S. District Court for the Southern District. In response to your request, we contacted Mr. Blum and discussed his estimate; he was not able to send us a written discussion of his estimating procedure … We did not discuss these particular aspects of the estimating process in our initial conversation with Mr. Blum and our attempts to contact Mr. Blum on a follow-up basis have not been successful.” (see my 130-page SSRN article for footnotes ad nauseum)

On March 4, 2009 the IRS Commissioner Charles Shulman testified before the Subcommittee that there is no credible estimate of lost tax revenue from offshore tax abuse.  Treasury Departments have often stated large figures of unreported annual taxable income in foreign jurisdictions, and a huge asset base from which that income percolates.  By example, the IRS has stated that underreporting and underpayment of tax liabilities account for more than 90 percent of the $450 billion tax gap dollars. While the IRS has not estimated the size of the international tax gap, the Treasury Inspector General for Tax Administration reported in 2012 that estimates range from $40 billion to $123 billion annually.

I fancy myself a two-bit political economist of sorts and thus understand the difficulty in measuring an unseeable "black hole" (I recall Dutch Prof. Dr. Brigitte Unger of Utrecht referring to her measuring of the opaqueness of the money laundering industry in this way, but it may have been my crime fighting friend Prof. Dr. Dionysios Demetis of Hull).  However, just like with 'proving' the existence of a black hole, we can research for and analyze data of 'measurable' surrounding circumstances.  In 2000, the U.S. State Department estimated that assets 'secreted' in offshore jurisdictions totaled $4.8 trillion. In 2007, the OECD estimated the total at $5 trillion to $7 trillion.  If banks, like UBS,  had such significant 'secreted' assets in 2007, then I wonder why it is that these same banks required capital bailouts in 2008 from sovereign wealth funds, direct governments intervention, and central banks? Seems to me a disconnect.  Several academics and economists with various motivations have sought to measure the AUM of international financial centers, naming just two examples from many: the IMF and Brook Harrington.  I welcome a research grant and a collaborative team (without a political opinion to express in its findings) to undertake an exhaustive research and analysis.

The CTJ/ITEP article then points to the egregious UBS  conduct wherein the bank assisted clients in evading U.S. tax on $15 billion of assets (I recall it being $20 billion but I'll go with Citizen's for Tax Justice's figure).  I also recall that after the full investigation of Credit Suisse's international clients that more than half of the clients turned out to be 'tax compliant', or so the bank testified under oath about the findings of a robust audit of its international client base by a respected outside U.S. law firm.  See my commentary of 2014  Of about $10 billion of Credit Suisse AUM initially identified as potentially non-compliant with U.S. tax laws, it turned out that $5 billion were compliant and another $2 billion had lost a U.S. tax during the time in question.

Still, $4 or 5 billion of non-compliant AUM is $ 4 or $5 billion of AUM.  Not something that should go unnoticed by a reputable bank.  Not excusing Credit Suisse or UBS in any way. The bank and its employee(s) should be held accountable for assisting individuals in committing a crime against the U.S. government.  The other governments of the world may not like the U.S. jurisdictional criminal reach into their business' affairs, but that's the reality they live in for exposing themselves to the U.S. market.  Especially banking institutions that are both subsidized and protected by U.S. taxpayers, or take advantage of the U.S. financial markets (UBS had significant U.S. exposure during the time of its non-compliant behavior).

Let's say it all of UBS was non-compliant dollars hidden from the IRS though probably some portion was compliant.  5% return on $15 billion is $750 million. Take an average 15% tax rate on portfolio income and that gives is $112.5 million.  UBS, the biggest wealth manager for foreign assets under management, I recall reading in industry reports back when the UBS case broke, had 10% of the market.   Let me cut that figure in half for sake of argument.  So if UBS is representative of only 5% of the market, we are still in the $2 billion range of lost tax revenue - a very far cry from the articles $40 - $70 billion, or previous $150 billion.  More likely, it's a lot less.  (see my previous commentary on Kluwer's Tax Blog)

Since the first edition written in Spring of 2012, the industry leading 2,000 page analysis of the FATCA and CRS compliance challenges,  79 chapters by FATCA and CRS contributing experts from over 30 countries.  Besides in-depth, practical analysis, the 2017 edition includes examples, charts, timelines, links to source documents, and compliance analysis pursuant to the IGA and local regulations for many U.S. trading partners and financial centers.   Byrnes’ Lexis Guide to FATCA Compliance, designed from interviews with over 100 financial institutions and professional firms, is a primary reference source for financial institutions and service providers, advisors and government departments.  This treatise also includes in-depth analysis of designing a FATCA internal policy, designing an equivalent form to the W-8, reporting accounts, reporting payments, operational specificity of the mechanisms of information capture, validation for fit for purpose, data management, and exchange by firms and between countries, insights as to the application of FATCA, CRS, and the IGAs within BRIC, SEA and European country chapters.  This fifth edition provides the financial enterprise’s FATCA compliance officer the tools for developing and maintaining a best practices compliance strategy.  No filler of forms and regs – it’s all Texas beef folks!

* In an earlier version this morning I inadvertently swapped TJN for CTJ.  I am separately examining a TJN post of yesterday citing to a Finish government sponsored Global Financial Integrity report measuring illicit flows (see here) based upon matched-trade methods to estimate misinvoicing. Trade misinvoicing is calculated by comparing a country’s reported trade statistics with those of its “advanced economy” trading partners (see p. 46 of the GFI report).

You may in looking at trade misinvoicing find Maya Forstater's work a helpful resource as well:https://hiyamaya.wordpress.com/