Reuters reported yesterday that in highly dramatic fashion the French tax authorities and IT specialists raided Google's headquarters.  I don't own Google stock. I don't live in 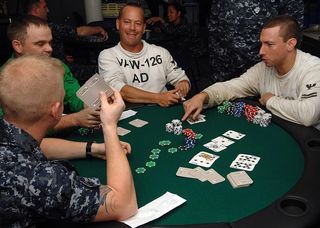 California anymore where Google has its US campus with a vast amount of jobs.  And I'm not in favor of Google's near monopoly on search (though it has accomplished this by offering a really great product and (free) work tools that make my life much easier).

But my U.S. nationalistic eyebrows rise high on my forehead when I read the headline.  And I thought of Texas Hold'em.  Let me explain....

"Google, now part of Alphabet Inc, pays little tax in most European countries because it reports almost all sales in Ireland.  ...  If staff in countries like France finalize contracts with local clients, then the company would be obliged to report the revenues nationally and pay taxes in each country."

Prof. David Herzig (Visiting at Loyola Law, Los Angeles this summer) and I discussed for an hour yesterday whether Google may, or may not, have a PE.  Whether the activities of the Irish company in France, or the French company on behalf of the Irish company, rise to the level of a permanent establishment under the Ireland-French tax treaty will inevitably require a Court to decide.  At least, we couldn't decide and we consider ourselves reasonable minds.

Perhaps the France authority will beat Google down to just accept a UK deal, albeit a bit higher.  But I take a contrarian perspective that will be as unpopular with my academics colleagues as my current Starbucks stance.  (see  Starbucks’ Transfer Pricing & The EU Commission Decision)

The UK Revenue, at least according to its testimony in Parliament, with a fine tooth comb, swept all of Google's operational practices and procedures, examined emails and memos, interviewed dozens of staff and executives, and after this three-year intensive investigation concluded that Google did not have breach the threshold of a PE  (at least according to the Ireland - UK tax treaty).

I think it unlikely, albeit recognize it is plausible, that Google France may have different operational procedures, or that Google may have hoodwinked the UK revenue authorities. France, on the same set of facts, may find under its law that the treaty PE threshold has been breached whereas the UK may not (which would be a damaging finding to the EU system of Rule of Laws and to the general tax treaty system PIL, but that's another issue).

But does it require a "raid" upon another US multinational to collect the facts?  Would a disclosed subpoena have been sufficient legal protocol for both sides to then establish a time for the meeting, document collection, and interviews, in an orderly fashion.   Would a MAP request under the Ireland - France treaty with EoI not been effective?  France could have requested an EoI from the UK Revenue for the evidence gathered from the UK exhaustive investigation.

But instead, the French government chose to organize a "raid" on a US company - equivalent of a perp arrest walk.  Obviously, the French are seeking headlines, the French President seeking votes (kicking the Americans is always a popular French vote getter)  and nationalistic social - political pressure on Google (perhaps the French will boycott the Internet).

Perhaps the PE system must be changed or its definition in treaties?  But that's not where the law stands today.  If France wants to capture more tax revenue from Google, let France change its laws to do so.

What I see is a U.S. company, bushwacked then drug through the mud, because the French government has decided that the company under a doctrine of equity and fiscal necessity does not pay enough tax to support the French joie de vivre.  My question: What is the U.S. Treasury going to do about it?  File another "I protest" speech?  (See Will the US Impose IRC Section 891 - Double US Tax Rates - on EU Companies for State Aid Retribution?).

A French colleague has reminded me that the "American Chicken has come home to roost".  Not Colonel Sanders.   BNP's $10 billion OFAC fines.  $10 billion fine for breaking "American OFAC rules".  Apples and Oranges my French friends.  OFAC was, at the time, clear law, that BNP clearly violated, and its chief executive team lied about violating.  It wasn't a civil tax dispute based on heavy facts.  It was a fundamental human rights matter of a bank funding  governments known for genocide and terrorism, accepted as such by the French government.  Anyway, I said then that the large US fine of BNP was merely passing on the blame to the government and pension fund shareholders - where the blame clearly did not attach.  But the French wanted to protect the executives from criminal responsibility so it cost $10 billion to do so.  The clear lesson - do not fund genocidal, terrorist regimes.

I think BNP has something to do with this Google raid though.  The French have a long memory, and experts at diplomacy.  The French government did not fold on BNP, rather it traded on a bad hand.  It knew that the hand was a loser, and thus accomplished a trade-off to keep the executives from being hunted down like Swiss bankers.  Perhaps the Google raid is a feint - not about Google and whether it has a PE in France, but instead is a warning to the U.S. federal authorities in general about geo-politics.

If it is the sore feelings left from BNP, then France is playing like a game of poker with a wry smile.  Will the U.S. fold, call, or up the ante.

But in Texas we play Texas Hold 'em poker with the cards face up, not face down.  Because more information is available, we bet aggressive on a good hand but fold quickly on a bad hand.  I hope the U.S. Treasury follows Texas Hold 'em style and realizes it has a good hand.  Up the ante by languaging a bill for Section 891 Congressional input!  Up it again by conducting a couple IRS "raids" of French companies to gather evidence for a Section 482 intangibles audit.

And once the French fold, agree to let the normal tax protocols and procedures work without political interference, domestically for tax audits, and international for policy changes.  Internationally, France and the US should work within the agreed framework of the OECD to prospectively evolve the international tax system.  "Raids" [on Google] do not help build credibility for a cooperative framework.