On March 16, the International Court of Justice (ICJ) granted Ukraine's request for provisional measures and ordered Russia to immediately suspend military operations in Russia. Despite Ukraine's emphasis regarding the urgency of the situation, the ICJ set the schedule for pleadings over the next year with Ukraine's Memorial due in September 2022 and Russia's Counter-Memorial due in March 2023.

Will the Court's order make any practical difference? It can help to further mobilize the international community against Russia's invasion of Ukraine and bolster international criminal proceedings against President Putin and others who may be responsible for war crimes and crimes against humanity in Ukraine.

The Prosecutor of the International Criminal Court (ICC) has opened a criminal investigation and has called on the international community to assist in the collection of evidence of possible war crimes and crimes against humanity in Ukraine. Several states have offered financial and legal assistance. The ICC Prosecutor has pledged that President Putin will not act with impunity. 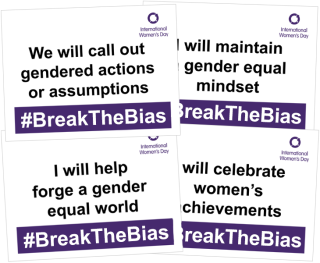 The theme for International Women's Day 2022 is #BreakTheBias. Women have made so much progress in international law. There are women leaders in virtually every area of our society including in international law. We are inspired by the female judges on the International Court of Justice, led by President Joan Donoghue, the Director General of the World Trade Organization, Ngozi Okonjo-Iweala, and human rights activists such as Amal Clooney, among many others. Yet so much more remains to be done.

"Imagine a gender equal world. A world free of bias, stereotypes and discrimination. A world that's diverse, equitable and inclusive. A world where difference is valued and celebrated. Together we can forge women's equality. Collectively we can all #BreakTheBias."

Ukraine v. Russia at the International Court of Justice

The International Court of Justice held an emergency hearing today on Ukraine's complaint against Russia under the Genocide Convention. Russia was a no-show. Ukraine is asking the Court to order Russia to halt its invasion and argued that Russia has already committed war crimes by targeting civilians, among other actions. Unfortunately, even if the Court does act quickly to order a suspension of armed hostilities, Russia is unlikely to comply. However, the Court ruling could give the U.N. Security Council additional justification for action despite any Russian objections.

There is so much happening in the Russian-Ukraine conflict right now, it is hard to keep up. But here are a few recent developments that may be of particular interest to international lawyers and international law scholars:

First, on February 26, Ukraine filed an application instituting proceedings against the Russian Federation at the International Court of Justice (ICJ) for alleged violations of the Convention on the Prevention and Punishment of the Genocide Convention. The ICJ press release may be found here. Ukraine alleges that Russia has falsely claimed that Ukraine has committed acts of genocide in certain regions of Ukraine, using that to justify Russia's military intervention. Ukraine "emphatically denies" Russia's claims of genocide. Ukraine also alleges that Russia is planning acts of genocide in Ukraine and has requested provisional measures be ordered by the Court, specifically that the Court order Russia to immediately halt all military actions in Ukraine.

Second, Ukraine has filed an application to become a member of the European Union based on its commitment to European values. Pictures of Ukrainian President Zelensky have been circulated on social media showing him signing the declaration requesting membership.

Third, Ukraine has called on the United Nations to investigate war crimes by Russia. The U.N. Human Rights Council agreed yesterday to hold an emergency debate on the situation in Ukraine.

Fourth, the Prosecutor for the International Criminal Court (ICC) announced yesterday that he is opening an investigation into possible war crimes and crimes against humanity in Ukraine. Neither Ukraine nor Russia belong to the Rome Statute of International Criminal Court (ICC). However, Ukraine signed the ICC Statute and has submitted declarations accepting the ICC's jurisdiction over alleged crimes under the Rome Statute committed on its territory with respect to Russia activities there over the last decade.