Snapshot of the Covid-19 Pandemic 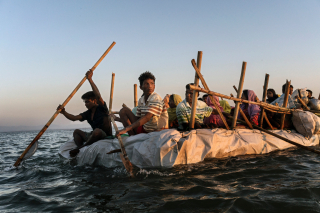 June 20 is World Refugee Day. Sadly, the number of persons who are forcibly displaced from their homes and who seek refuge in another country continues to grow to record levels. The UN High Commissioner for Refugees (UNHCR) estimates the number of forcibly displaced persons to be almost 8o million - twice the number just a decade ago. New regional and international solutions are desperately needed for this growing crisis. For more information, go to the UNCHR website.

Photo of Rohingya refugees from NYT.

Nasrallah is a citizen of Lebanon who became at lawful permanent resident of the U.S. in 2006 at age 18. In 2011, he pled guilty to two counts of receiving stolen property in interstate commerce. The government sought to deport him based on his convictions. The Immigration Judge (IJ) determined that one of his convictions constituted a crime involving moral turpitude (CIMT) under 8 U.S.C. § 1227a(2)(A)(1) and a particularly serious crime. However, the IJ also determined that Nasrallah had established a clear probability that he would be persecuted and tortured if returned to Lebanon because of his Druze religion and Western ties, so the IJ granted him deferral of removal under the Convention Against Torture (CAT).  On appeal, the Board of Immigration Appeals held that the IJ erred in granting Nasrallah a deferral and ordered his removal. Nasrallah appealed to the U.S. Court of Appeals for the Eleventh Circuit, arguing that the IJ acted with prejudicial bias and that the BIA erred in finding his crime to be a CIMT as well as a particularly serious crime and in overturning his deferral of removal. The Eleventh Circuit denied the appeal on the ground that the court lacks jurisdiction to review factual findings underlying the removal order under pursuant to 8 U.S.C. § 1252(a)(2).

On appeal, the Supreme Court agreed with Nasrallah that federal courts have jurisdiction to review factual findings underlying an agency’s denial of deferral of removal under CAT. However, the review is the highly deferential substantial evidence standard. As a result, Nasrallah will have another opportunity to seek relief from removal to Lebanon.