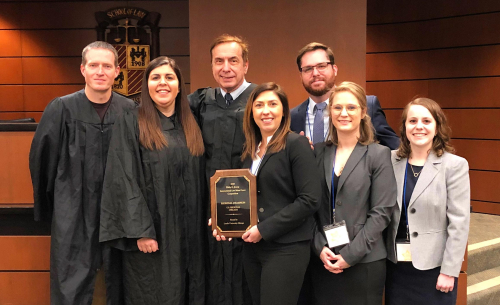 The Philip C. Jessup International Law Moot Court Competition is the oldest, largest, and most prestigious moot court competition in the world.  Every year, law students from more than 600 law schools and more than 90 countries take part in a simulation of a fictional dispute between countries before the International Court of Justice, the judicial organ of the United Nations.

The 2019-2020 season marks the 61th edition of the Jessup Competition worldwide.

The Case Western team received the award for the third-best brief and awards for best speaker in the competition (Laura Graham), eighth-best speaker (Andrea Shaia) and ninth-best speaker (Anthony Severyn). The applicant side, composed of Laura Graham and Elizabeth Safier, then proceeded to beat Wayne State in the quarter-final round, Loyola in the semi-final round and Wisconsin in the final round.

It was the second year in a row that CWRU won the Chicago Jessup International Law Moot Court Championship, earning a berth in the International Rounds in Washington DC in April for the ninth time in 17 years. CWRU is the most recent U.S. team to win the World Championship of the world’s largest, oldest and most prestigious international moot court competition. The Jessup team was coached by CWRU Dean Michael Scharf and Jones Day partner Christopher McLaughlin, assisted by Professors Avi Cover, Jim Johnson, Andrew Pollis and Cassandra Robertson.

Congratulations to all of the teams competing in Jessup Rounds around the world, and thank you to the host institutions and armies of judges for both the memorials and the oral advocacy rounds. If you're a Jessup alumnus, we urge you to visit the website of the International Law Students' Association and make a small (or large) contribution to support the world's largest international law moot court competition.