The Belt and Road Initiative (BRI) of the People’s Republic of China is also variously known as “One Belt One Road” (OBOR), the “Silk Road Economic Belt,” and the “21st-century Maritime Silk Road.” Chinese President Xi Jinping originally announced the BRI strategy during official visits to Indonesia and Kazakhstan in 2013. As of February 2019, China had signed “Belt and Road” agreements with 152 countries and international organizations in Europe, Asia, Middle East, Latin America, and Africa, spending billions of dollars in developing countries around the world. 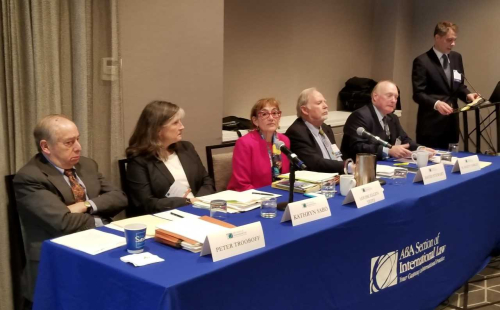 The American Bar Association Section of International Law meets this week in Washington, D.C. for its Annual Conference (an event previously known as the Spring Meeting). The SIL Annual Conference is well known for its high-quality panels and presentations, incredible networking opportunities, and social events in extraordinary venues. Whether or not you're also here in D.C. this week you should plan to attend the SIL 2020 Annual Meeting in New York. The annual conference of the American Bar Association Section of International Law included a roundtable discussion on law schools and legal education.

Since 1983, the Theberge award has been presented to individuals who have contributed outstanding, career-long service to the field of private international law.

Mr. Byowitz was a partner at Wachtell for more than 30 years, specializing in antitrust and competition law. He has represented multinational corporations on major domestic and international mergers, acquisitions, joint ventures, and corporate takeovers at the U.S. Department of Justice, the Federal Trade Commission, and State Attorneys General in the United States. He also consults on antitrust investigations in the European Union, the United Kingdom, Argentina, Australia, Brazil, Canada, China, Colombia, Mexico, Venezuela and many other countries. He has served as antitrust counsel on many major matters including, among many others, for United Technologies in its acquisitions of Rockwell Collins and Goodrich, Valspar in its acquisition by Sherman-Williams, Novartis in acquiring Alcon, and Maytag in its acquisition by Whirlpool.

Mr. Byowitz is a frequent speaker on antitrust issues in the U.S. and abroad. He is consistently ranked among leading antitrust specialists in peer reviews including Global Competition Review, Who’s Who Legal, Super Lawyers, Best Lawyers and Chambers.

Mr. Byowitz received an A.B. (1973) from Columbia College and a J.D. (1976) from New York University School of Law (Order of the Coif and editor of New York University Law Review). Before joining Wachtell Lipton (1983), Mr. Byowitz served as Senior Trial Attorney with the Antitrust Division, U.S. Department of Justice.

Mr. Byowitz has long been active in the American Bar Association. He serves on the ABA Board of Governors and previously served for 12 years in the ABA House of Delegates. He is a member of the Board of Directors of the American Bar Foundation (ABF) and is a Past Chair of the Fellows of the ABF, was previously New York State Co-Chair of the Fellows, and has received the Outstanding State Co-Chair Award. He has served as a member of the ABA’s Presidential Appointment Committee, the ABA’s Standing Committee on Membership, and an ABA Presidential Task Force on Federal Pleading Standards. He has served as Chair of the Section of International Law, Chair of three of its divisions, Chair of its International Antitrust Law Committee and Co-Chair of its International Pro Bono Committee. He has also received the Section’s Lifetime Achievement Award.

The problem for the 2020 Philip C. Jessup International Law Moot Court Competition was announced today at the conclusion of the final round of this year's competition (United States -- Columbia University v. Hungary).

The 2020 problem will involve:

The ICJ is Hiring 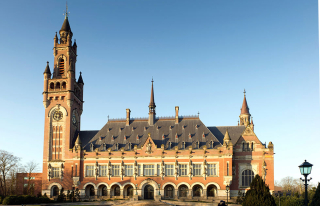 You still have two weeks to apply by April 15, 2019 for the position of Registrar at the International Court of Justice.