In an emotional and highly-divisive vote, the Greek Parliament voted 153-146 to approve its neighbor's name change from FYROM (the Former Yugoslav Republic of Macedonia) to North Macedonia. The measure will now allow North Macedonia to join NATO and the European Union.

Many Greeks will still reject the name North Macedonia, as seen by the closeness of the parliamentary vote. But the Greek Parliament's approval of the new name will now clear the way for North Macedonia to join both NATO and the European Union.

Best Job Posting of the Week 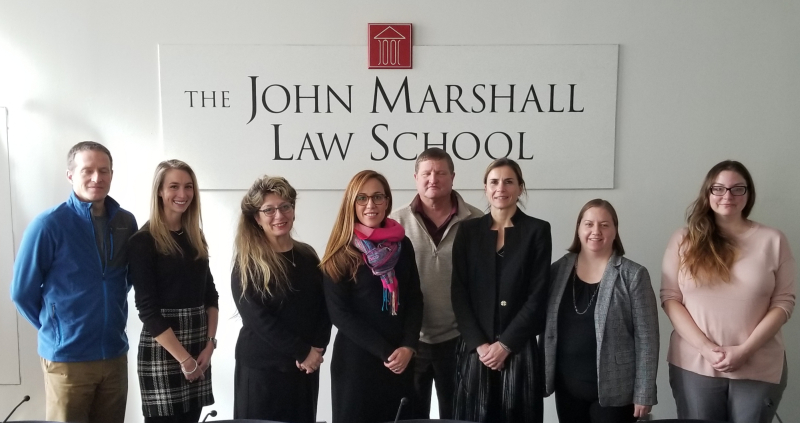 The International Courts and Tribunals Interest Groups (ICTIG) of the American Society of International Law (ASIL) is holding a program on Friday, January 25, 2019 at The John Marshall Law School in Chicago to present various works in progress. Speakers include:

Nominations Open Until February 15 for the 2019 Scribes Book Award

Since 1961, Scribes--The American Society of Legal Writers--has presented an annual award for the best work of legal scholarship published during the previous year. The Scribes Book-Award Committee receives between 30 and 40 nominees each year. The Scribes Book Award is presented at a CLE program held in conjunction with the Scribes' annual meeting, which this year will be held in Washington, D.C. on Friday, April 12, 2019.

International law experts may remember that the 2018 winner of the Scribes Book Award was The Internationalists: How a Radical Plan to Outlaw War Remade the World by Oona A. Hathaway and Scott J. Shapiro. Honorable mentions went to The Color of Law: A Forgotten History of How Our Government Segregated America by Richard Rothstein, and to Miles Lord: The Maverick Judge Who Brought Corporate America to Justice by Roberta Walburn.

Nominations for the 2019 Scribes Book Award will be accepted until February 15, 2019. To nominate a book for this year's book award, all a publisher needs to do is send a copy to each of our book award committee members.  For more information, please contact the Executive Director of Scribes, Philip Johnson, at scribesleglwriters@gmail.com.

The Association of American Law Schools Section on International Law elected a new slate of officers for the 2019-20 term. These officer will serve until the end of the next AALS Annual Meeting, which will be held from January 2-5, 2020 in Washington, D.C.

The Chicago Council on Global Affairs announced today it has received a $5 million multi-year commitment from the Pritzker Foundation to support its annual three-day global cities forum. Launched in 2015, the forum convenes civic, business, cultural and academic leaders from around the world to raise provocative questions about the influence of global cities and how they can solve pressing global challenges. The forum, cohosted with the Financial Times, will be named the Pritzker Forum on Global Cities in honor of the commitment made to the Council’s Second Century Campaign. The 2019 Forum will take place June 5-7, 2019.

Established in 1991, and funded with a three million dollar endowment, the Frederick K. Cox International Law Center is the hub of CWRU’s international law program.  Michael Scharf has served as the Center’s Director for the past sixteen years.  Since becoming CWRU’s Co-Dean in 2013, Scharf has continued to direct the Center with the assistance of several faculty and staff.  Now CWRU has announced that Steven Petras, a long-time CWRU adjunct professor, has accepted the position of the director of the Frederick K. Cox International Law Center.

Joining him will be Professor Juscelino Colares, who has taken on the role of co-director. Dr. Colares (PhD, JD) clerked for the Hon. Jean-Louis Debré, Chief Justice of France’s Constitutional Court (2008-09 term) and practiced at Dewey Ballantine, LLP, Washington, DC, where he litigated trade cases before federal agencies, federal courts and NAFTA panels. Colares served last year as the Chair of the University Faculty Senate. He was recently reappointed by the Office of the United Trade Representative to serve on the United States Roster of NAFTA Chapter 19 (Trade) Panelists.  Colares' research has been published in leading peer-review journals, including the American Law and Economics Review, Journal of Empirical Legal Studies, Journal of International Economic Law, Journal of World Trade and Jurimetrics.

The American Bar Association House of Delegates meets later this month with a full slate of resolutions, including proposals to change the bar passage rate standard for law graduates and another to oppose arming non-security personnel in the nation’s schools.

The HOD, as the ABA policy-making body is known, meets Jan. 28 at Caesars Palace in Las Vegas at the end of the 2019 ABA Midyear Meeting. Its preliminary agenda has about 30 different resolutions. The HOD consists of 601 delegates from state, local and specialty bar associations and meets twice a year.

In a significant change, the council of the ABA Section of Legal Education and Admissions to the Bar is asking the delegates to concur with Resolution 105, which would simplify the bar passage standard for the nation’s 203 ABA-approved law schools. The HOD rejected a similar change in 2017 that would require schools to have a bar-passage rate of at least 75 percent within two years for those who sat for the test. Now, schools can meet the passage standard through a variety of ways.

A study released by the council found that nearly 9 of 10 law graduates who first sat for the bar in 2015 passed it within two years. Under ABA procedures, the HOD can review a change in ABA legal education standards twice but the council can still enact it without HOD concurrence.

Resolution 106A would put the ABA on record as opposing laws that authorize teachers, principals or other non-security school personnel to possess a firearm in or nearby a pre-K through grade-12 school. The proposal also urges banning public funds for firearms training for teachers, principals or other non-security personnel or for firearm purchases for those individuals.

Other resolutions range from ensuring the accuracy of criminal records to rescinding the Trump administration’s zero-tolerance immigration policies. They include:

(Adapted from an ABA Press Release)

Founded in 2009, the philosophy of Trade, Law and Development has been to generate and sustain a constructive and democratic debate on emergent issues in international economic law and to serve as a forum for the discussion and distribution of ideas. In keeping with these ideals, the Board of Editors is pleased to announce Trade Facilitation as the theme for its next Special Issue (Vol. XI, No. 1).

Trade facilitation is the simplification, modernisation, and harmonisation of international trade procedures. It helps simplify customs procedures by reducing costs and improving their speed and efficiency through a multilateral understanding. The Trade Facilitation Agreement (‘TFA’) entered into force on February 22, 2017 and is one of the first major new agreements reached by the member countries of the WTO since its establishment in 1995. It contains provisions for expediting the movement, release and clearance of goods, sets out measures for effective cooperation between customs and other appropriate authorities on trade facilitation, and contains provisions for technical assistance and capacity building in this area.

There is extensive empirical data to suggest that trade facilitation can significantly boost trade. However, several concerns exist regarding the projected benefits of the TFA, its implementation, and its enforcement in an increasingly protectionist trade environment. There is also uncertainty as to how the TFA will bring uniformity and consistency in the border management of developing and least-developed countries and the role of the Committee on Trade Facilitation in this respect. Moreover, most regional and bilateral preferential trade agreements negotiated in the recent past have incorporated varying provisions related to trade facilitation. It is unclear whether the TFA has been successfully able to achieve broad application of these commitments. These subjects have not received sufficient attention from mainstream academia yet. Consequently, existing literature is inadequate to effectively equip policymakers to deal with such issues.

Alongside this, India has been championing trade facilitation in services at the WTO. Trade in services too faces various barriers at and behind the border, which poses difficulties for service providers from developing countries like India in accessing key markets. India’s proposal focussed on making existing market access meaningful through reduction in transaction costs arising from unnecessary regulation. The proposal received a mixed response. Some Members like China even supported the proposed agreement going beyond the scope of domestic regulation under GATS, while others expressed concerns regarding the need for a separate legal text for trade facilitation in services and the nature and scope of the obligations put forth therein.

This Special Issue, currently scheduled for publication in July 2019, will provide an ideal platform to deliberate on trade facilitation initiatives at the WTO and how they relate to more regional initiatives. Accordingly, the Board of Editors is pleased to invite original and unpublished submissions for the Special Issue on Trade Facilitation for publication as ‘Articles’, ‘Notes’, ‘Comments’ and ‘Book Reviews’.

Manuscripts may be submitted via e-mail, ExpressO, or through the TL&D website. For further information about the journal and submission guidelines, please visit www.tradelawdevelopment.com.

In case of any queries, please contact the editors at: editors[at]tradelawdevelopment[dot]com.