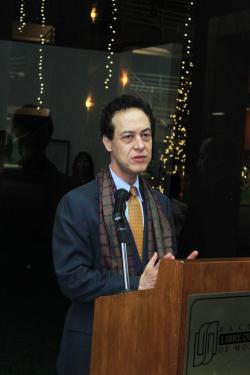 Gerardo Puertas Gomez, Presidente del Consejo, Facultad Libre de Derecho de Monterrey (“FLDM”) Mexico, was today elected as Chair of the Association of American Law Schools Section on North American Cooperation. He follows outgoing Chair, Professor Mark E. Wojcik of The John Marshall Law School in Chicago, who was himself elected as Chair of the AALS Section on International Legal Exchange (making it the 10th time he has been Chair of an AALS Section).

Professor Lisa Black of the California Western School of Law was elected as the Chair-Elect of the AALS Section on North American Cooperation. She will become Section Chair in 2018 when the AALS will hold its annual meeting in San Diego and serve through January 2019, when the AALS will meet in New Orleans.

The AALS Section on North American Cooperation also elected as Secretary Cara Cunningham-Warren (University of Detroit Mercy School of Law) and as Treasurer Kim Nayyer (University of Victoria Faculty of Law). Professors Cunningham-Warren and Nayyer were also speakers at the Section's program on Legal Research in Mexico and Canada (photo at right).