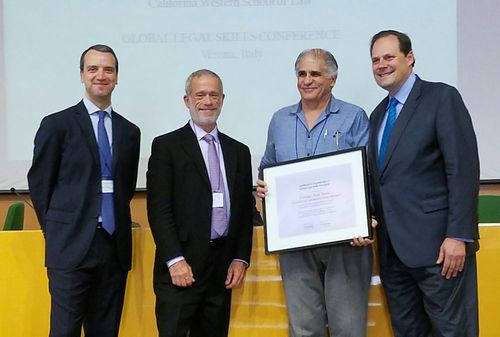 Professor Robin Palmer, Director of Clinical Legal Studies at the University of Canterbury in New Zealand, received a 2016 Global Legal Skills Award at the 11th Global Legal Skills Conference in Verona, Italy. He had been nominated for the award by Professor Chris Gallavin, Deputy Pro-Vice Chancellor, College of Humanities and Social Science at Massey University in New Zealand.

Before becoming a Professor of Law at the University of Canterbury in New Zealand, Professor Palmer was the Director of the Institute for Professional Legal Training (IPLT), affiliated to the University of KwaZulu-NataI, Durban, South Africa. He is also a practicing barrister (advocate).

Professor Palmer has been involved in numerous high-profile cases, including as defense counsel in the 'Trust Feed' trial, in which the existence of apartheid hit squads was conclusively proved. From 2006 to 2012, he was the lead specialist prosecutor of the 'Life' case, where international brokers, local hospital groups and surgeons were prosecuted for illegal organ trafficking. He has also run various training courses and consultancies for the UNDP, UNODC, OSI, OSISA, the Commonwealth, USAID, GIZ, DFID, EU, the IBA, and other organizations in diverse fields from 1995 to the present, including justice reform, legal aid, constitutional development and good governance projects in various African, Asian and East-European countries. He was a member of the International Bar Associaiton Human Rights Institute's Task Team into money laundering, tax havens, and poverty from 2012 to 2013. He was the lead consultant in the UNODC expert group meeting on private/public security cooperation Vienna. He initiated, and run a postgraduate diploma course in forensic investigation at the University of KwazuIu-Natal in South Africa since 2000, and is currently specializing in transnational and international criminal law, corruption issues, and legal sector reform. He has a special interest in developing and implementing generic general and specific legal skills, ranging from reasoning, oral, writing and negotiation skills, to applied court skills and the utilization of new technology in the law.

His nomination letter noted that Professor Palmer has developed simple, straightforward methods to train specialized legal skills, such as trial advocacy and clinical law skills such as interviewing, counseling, negotiation, statement-taking, letter , report and brief writing, and file management. His trial advocacy system is contained in his short book, Basic Trial Advocacy Skills (with co-author Professor David McQuoid-Mason, who wrote the ethics chapter), which has been used by law and other faculties in Africa since 2000. It's only one of seven books that he wrote or edited. After this particular book was circulated at the conference of African Chief Justices in Zambia in 2009, the publisher printed a special edition for judges and the book was distributed to the courts of most of the countries in Africa.

In 2012, Professor Palmer (with Professor David McQuoid-Mason) published for Open Society, Institute (Budapest) a well-received comprehensive African Law Clinician's Manual, with detailed, step-by-step guidelines, which has been distributed in hard copy and e-book format to over 60 countries. Professor Palmer has also edited, and was the main author, of a practical guide to the Law of Evidence in South Africa for Oxford University Press, and is currently completing the companion volume on Criminal Procedure. He was also co-author on two other books for Oxford University Press: A Practical Guide to Civil Procedure (2003; 2 ed: 2009; 3 ed 2016), and Criminal Law (2012; 2 ed 2015).

He was also the moderator and editor of a detailed practical International Criminal Justice syllabus, published by the Institute of Security Studies, which has been distributed free of charge to most African law schools. He also recruited a team of authors in New Zealand, and as editor and main contributing author, is currently preparing a detailed, skills-based book, The New Zealand Clinical Legal Studies and Internships Handbook (publication in August 2016- Thomson-Reuters).

OK, so he's basically amazing in the scope and impact that his publications have had in Africa and New Zealand. But he's also involved heavily in reforming legal skills education.

He has long advocated a more robust approach to the use of new technology in legal proceedings (especially where it can assist to avoid miscarriages of justice). For example, following up on the inclusion of a chapter written by him on the topic in the Evidence book, he and a research team were awarded a grant by the New Zealand to investigate the scientific validity and possible legal application of Brain-scan (EEG) technology (so-called 'brain-fingerprinting). Part of the project is the development on new skills protocols to ensure acceptable investigative and legal standards.

The GLS award was signed by the GLS Conference Co-Chairs, Professor Stefano Troiano of the University of Verona Department of Law (pictured at left) and Professor Mark E. Wojcik of The John Marshall Law School (pictured at right). The award was presented by Professor Anthony Winer of Minnesota, a prior recipient of a Global Legal Skills Award for his book on International Law Legal Research. Professor Palmer is pictured (above right) holding the award.

More information about the Global Legal Skills Awards is available at http://glsc.jmls.edu/2016/gls-awards.