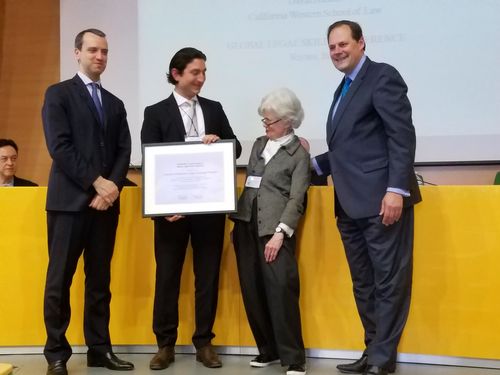 Lawbility is a firm that offers specialized courses in Legal English, courses on practical legal skills, and preparation for bar examinations. In 2013 it also published The Legal English Manual which, as many of the award nominators noted, is "an indispensible tool for teaching legal English in Switzerland."

The Legal English Manual published by Lawbility was co-authored by four lawyers and Legal English teachers: Alison Wiebalck, Clemens von Zedwitz, Richard Norman, and Kathrin Weston Walsh. The book covers 14 specific areas of law and has been well received by reviewers, course participants, and students who speak English as a second language.

The GLS Award was signed by the Co-Chairs of the GLS Conference, Professor Stefano Troiano of the University of Verona Department of Law (pictured at left), and Professor Mark E. Wojcik of The John Marshall Law School, who was the founder of the GLS Conference Series. The award was accepted by Lawbility's founder, Jean-Luc Delli of Switzerland. The award was presented to him by a previous GLS Award Recipient, Dr. Mary Campbell Gallagher of New York, who is the President and Founder of BarWrite and BarWrite Press.

The full list of GLS Award Recipients is available by clicking here.

The next GLS Awards will be presented in 2017.