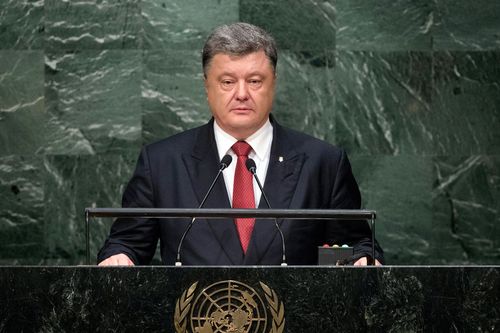 Ukraine is suffering from a brutal violation of the fundamental norms and principles of the United Nations Charter, President Petro Poroshenko told world leaders yesterday at the annual General Assembly debate.

“The aggressor is Russia – a neighbouring country, former strategic partner that legally pledged to respect the sovereignty, territorial integrity and inviolability of the borders of Ukraine,” President Poroshenko declared.

“In February 2014, Russia conducted an open and unprovoked aggression against my country, having occupied and annexed Crimea,” he continued. “Bluntly and brutally violating international law and shocking the whole world community […] Despite the fact the until now Russia refuses to officially admit its direct military invasion, today there is no doubt that this is an aggressive war against my country.”

Since the conflict began in eastern Ukraine in mid-April 2014, the UN reports that close to 8000 people– including Ukrainian armed forces, civilians and members of the armed groups– have been killed, and more than 17,800 injured.

The Ukrainian leader warned that to mislead the world community, Russian leadership orders that insignias be taken of its military servicemen and identification marks of its military equipment, to abandon its soldiers captured on the battlefield, and to “cynically use mobile crematoriums to eliminate traces of its crimes in Ukrainian soil.”

He noted that over the past few days, the global community heard “conciliatory statements from the Russian side” in which it called for the establishment of anti-terrorist coalition.

“Cool story, but really hard to believe! How can you urge an anti-terrorist coalition if you inspire terrorism right in front of your door?” President Poroshenko asked.

Meanwhile, he said he was taking the opportunity during his address to express his gratitude to the international community for the considerable efforts in providing necessary assistance to the people in need in his country.

“However, we must recognize that in the 21st century our Organization lacks an effective instrument to bring the aggressor-country to justice, which has stolen the territory of another sovereign State,” he added.

Since the beginning of the conflict, Russia has used its veto right twice while the Security Council was considering questions related to Ukraine.

“At the outset, Russia blocked a draft resolution condemning ‘fake referendum’ on Crimea's annexation in March 2014,” he stated. “The second time, Russia put its shameful veto on the draft resolution on establishment of the International Tribunal to investigate and bring to justice all responsible for Malaysian MH17 plane crash.”

President Poroshenko insisted that Ukraine stands for the gradual limitation of the veto right with its further cancellation.

“I welcome the initiative of my French colleague President Hollande, supported by President Peÿa Nieto of Mexico, on the Political Declaration to restrain from the veto right among the ‘P5 members’ [of the UN Security Council, United States, France, United Kingdom, China, and Russia] in case of mass atrocities.”

Furthermore, the Ukrainian leader said combatting terrorism should be one of the top priorities for the General Assembly 70th session, adding that he strongly believes that one of the most important aspects of fighting against terrorism is keeping and sharing the memory of the victims.

“In this context, I propose that [the] 70th Session of the General Assembly consider the establishment of the International Day of Commemoration of Memory of the Victims of Terrorist Acts,” he stated.

He also called upon the UN to launch a worldwide campaign to pressure Russian authorities to immediately release all Ukrainian citizens who have been held hostage or sentenced. He said this includes Nadiya Savchenko, Oleg Sentsov, Olexandr Kolchenko, as well as Oleg Sentsov, a respected filmmaker sentenced to 20 years in prison “only for being Ukrainian patriot.”