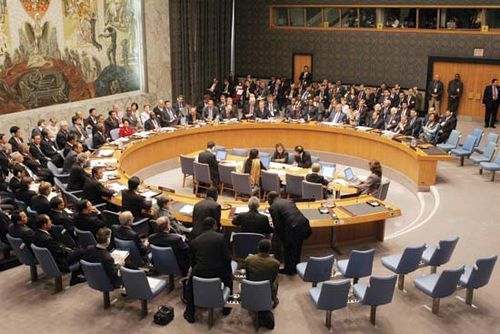 The United Nations Security Council has adopted a resolution authorizing the third phase of a drawdown of the UN peacekeeping mission in Liberia to 3,590 military personnel and 1,515 police personnel, and deciding that the Mission’s mandate would no longer include electoral support.

The text adopted last week reaffirms the Council’s expectation that the Government of Liberia will assume fully its complete security responsibilities from the UN Mission in Liberia (UNMIL) no later than 30 June 2016 and also reaffirms its intention to consider the continued and future reconfiguration of UNMIL accordingly.

Council members requested that the Secretary-General streamline the civilian element of UNMIL’s activities to fully reflect the downsizing of the police and military components and the narrowing of the mandate decided in resolution 2190 (2014), and to consolidate the three elements of the Mission in line with the security transition.

Calling on the Governments of Liberia and Côte d’Ivoire to continue reinforcing their cooperation, particularly with respect to the border area, the resolution calls upon all UN entities in Côte d’Ivoire and Liberia, including the UN Operation in Côte d’Ivoire (UNOCI) and UNMIL, to support the Ivoirian and Liberian authorities in doing so.

It also reaffirms the importance of inter-mission cooperation arrangements as downsizing of UNOCI and UNMIL proceeds.

Listed below are links to weblogs that reference U.N. Security Council Authorizes Drawdown of Peacekeeping Mission in Liberia: